April 15, 2011
A new threat is arising in the Near East, one that cooperates with Islamic fundamentalist terror, but goes far beyond it. The regime of Syrian president Bashar al-Assad is deemed a "reform" government by elements of the Obama administration and others among the Washington foreign policy elite. They see this region as they do the rest of the world — through blind eyes. 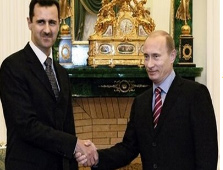 Assad's Syria not only aids terrorist groups, but also is on the verge of providing the expanding Russian military a needed port in the Eastern Mediterranean.

Russia and Syria have been allies since the Soviet-era, during the rule of Bashar's father, Hafez al-Assad.

Even during the period of the "new" Russia, the relationship between the two remains dynamic, giving the Assad regime a muscular aspect the Syrian state could not acquire by itself.

The Russian presence could pose a direct challenge to the U.S. Sixth Fleet.

While Moscow has a long way to go before its military can rival that of the United States, Russia, like China, is working to quickly improve its military.

Part of that build-up is the naval base at Tartus, Syria. At present, there is only a repair and supply facility at Tartus, but reports indicate that Russia will upgrade the base to accommodate large warships.

Moscow is also reported to be ready to supply Syria with the super-sonic Yakhont anti-ship cruise missiles, which Israel fears could find their way into the hands of Hezbollah.

The years-long Syrian support of terrorism has never appeared to have caused Moscow any difficulties.

For decades Damascus has assisted the terrorist groups Hamas and Hezbollah. Syria acts as a conduit for arms from the Islamic Republic of Iran to Hamas guerrillas, including missiles and mortar shells. An Iranian airlines was recently intercepted in Turkey and forced to land. Turkish inspectors found several sizes of mortar shells on board which were labeled as "spare auto parts."

In recognition for Syria's assistance on its behalf, Hamas has pressured anti-government demonstrators to temper their attacks on the Asad regime, which is staunchly anti-Israeli.

In addition to Hamas, the "reformist" Assad regime is an important ally of the terror group Hezbollah.

Not content with simply aiding terrorist groups, the Syrians are engaged in the construction and maintenance of two nuclear facilities. One has received inspectors from the UN nuclear watch dog agency, the International Atomic Energy Agency (IAEA), but the other remains strictly off limits.

In addition to its nuclear aspirations, Syria has proven itself adapt at the use of chemical weapons. In 2004, a Syrian chemical weapons team flew to Sudan at the request of the Islamic Sudanese government, which sought assistance in the suppression of a rebel village.

Several days later dozens of "frozen" bodies were recovered by the Sudanese military and sent for examination to a hospital in Khartoum, the nation's capital.

Reports of the attack and the "frozen" bodies made their way into some Western media (but hardly any mention in the U.S.) The description of the dead was consistent with that of the result of a chemical attack. [Reports of the attack is given in the book, Lies, Terror, and the Rise of the New Communist Empire....]

During the period of deepest U.S. involvement in the present "humanitarian" intervention in Libya, the question arose as to why the Obama administration did not also launch an assault on the Assad regime, which was also engaged in the slaughter of its own citizen protesters (not an unusual activity for the Syrian regime).

The answer is clear, and it has nothing to do with a "nuanced" approach to Near Eastern diplomacy. The simple truth is that Washington did not want to risk running afoul of Moscow.

While the world shutters at the prospect of the ever closer prospect of a nuclear armed Iran, Moscow is giving vital assistance to Iranian development of atomic power. Without Moscow's aid, this threat to world peace and stability would not exist.

The same blind eyes which are so darkened as to events in the Near East also see but do not comprehend the reality of the foreign policy objectives of the "new" Russia. The elite of the "new" Russia, which oppresses its own population, supports every anti-Western and every anti-U.S. tyranny in the world.

The truth is that the Obama administration, and others among the Washington foreign policy community, do not want to recognize the serious threats which are upon us.

It is far easier to look East, as with so much of the globe, through blind eyes, seeing but not comprehending.

It is also so much more dangerous for the people of the United States.