Appeasing communist China, or driving to self-destruction in a Cadillac

May 28, 2011
Cadillac, a division of General Motors, was once synonymous with financial achievement and success in the world. Cadillac was as American as apple pie, if at the upper crust. Today, however, with the agreement by Cadillac to pay for the production expenses of a Communist Chinese Party propaganda film, the Cadillac brand now stands for something quite different: the appeasement of a power hostile to the United States in the name of financial gain. 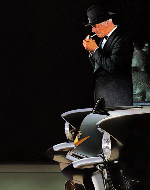 GM CEO Daniel Akerson describes China as the "key to [GM"s] success." GM was one of the auto companies receiving 2009 federal bailout money.

The film, with an English title of "Birth of a Party" or "The Great Achievement of the Founding of the Party," is due to be released in China on June 15. 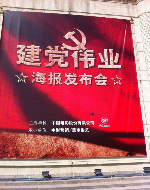 Cadillac lost its luster as the premier vehicular status symbol to other makes of cars long ago after decades of legendary poor workmanship and terrible gas mileage. Cadillac can now add to its list of misjudgments paying for a film commemorating the founding of the Chinese Communist Party, a political organization which has been responsible for the deaths of many millions of human beings whose only crime was that they may have disagreed with the Party.

The action of Cadillac is not merely an act of kowtow in the hope of profit. It is the reflection of a much wider strategy by China to establish dominance — economically, socially, politically, and militarily. In turn, this dominance is in the name not of Chinese civilization, but of an ideology introduced into general Chinese society by the Communist Party of China. 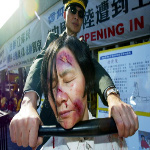 Cadillac's payment for a Chinese Communist propaganda film occurrs within the context of a single-party state in which all activities are monitored by a large and efficient secret police organization. The Chinese Communist Party is able to lay out courses of action which are to occur over many years.

In Communist China there is no real election cycle to which the Party must respond. There are only the dictates and will of the Party, and prison for those who go too far beyond limits established by the Party. In this environment long-range planning is both possible and necessary.

In today's China, profit is encouraged, but so is the intense study of the works of Lenin, the leader of the Bolshevik revolution in Russia. While capitalist enterprise, largely based on slave labor, is permitted, all that is done is under the eyes of China's secret police. The nearly twenty-year Chinese military buildup and modernization is financed by the profits from China's corporations.

Although all this appears quite paradoxical, there is no inconsistency. There is a plan, it is international in scope, and it goes back for decades. There is a reason why Chinese students are studying the theories of Lenin, because he is the primary inspiration for China's current economic and cultural strategy.

The problems China had faced before allowing "capitalist" enterprises to arise were not fundamentally different from those Lenin had confronted shortly after the Bolshevik revolution.

Lenin's Bolsheviks overthrew Russia's weak provisional government in 1917, and then went on to defeat Tsarist counterrevolutionaries by 1920. Although the Bolsheviks were triumphant militarily within Russia's borders, the regime still faced a nearly collapsed economy and peasant resentment at home, and hostile foreign governments abroad.

Lenin desperately needed help from the very governments he wanted to destroy, and his regime would not long survive the constant peasant uprisings which plagued Soviet Russia. 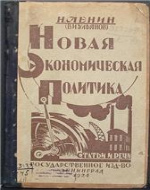 To solve his many pressing problems, Lenin acted boldly. In 1921, Lenin announced the end of state ownership of most industries, and proclaimed a New Economic Policy (NEP) which encouraged small scale capitalist enterprises.

Lenin also worked through individuals in the American business community who were sympathetic to Soviet Russia to attempt to persuade businessmen that Russia had changed course and was no longer the enemy to capitalism it once appeared to be. Lenin took steps to establish a pro-Soviet propaganda machine in Europe and the United States.

Within Russia, Lenin instructed his secret police to be extra vigilant against those attempting to take the new economic freedoms too far. The Bolshevik secret police was given the additional task of operating beyond the borders of Russia to hunt down anti-Communists in exile and mislead Western governments as to the actual state of affairs inside Russia.

The New Economic Policy did bring back a degree of prosperity to the newly established Soviet Union, but it did have a powerful enemy who rose to power after Lenin's death, Josef Stalin.

The New Economic Policy ended with Stalin, who decided that brutality and mass murder was the path to the Communist Utopia. As can be imagined, Stalin and Stalinism did have its enemies, just as Lenin's NEP continued to have its advocates who remained silent, and fearful, within Stalin's regime.

After Stalin's death, the methods of Lenin's NEP gradually gained respectability once more.

By the 1960s, the largest of the Communist states, the Soviet Union and China, found that they were in positions similar to that Lenin encountered in 1921. When U.S. President Ronald Reagan adopted a no-holds-barred approach to world Communism, the economic and military situation became very serious. 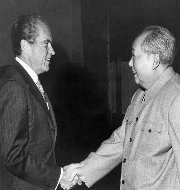 In 1972, Mao allowed China to "open" to the West. Supposedly China needed an ally against a peevish Soviet Union. This was joyous news to then-president Richard M. Nixon, bedeviled as he was by the continuing war in Vietnam. Nixon reasoned that China would be a handy ally against the Soviets and would be helpful in the negotiations with the North Vietnamese.

As China appeared to glide along toward a capitalist Renaissance, Russia seemed to remain mired in all things Soviet. The no-nonsense approach of U.S. President Ronald Reagan applied more economic and military pressure to the Soviets, resulting by 1991 in the collapse of the Soviet Union.

Oddly, however, one renowned expert in Communism, Fidel Castro, summed up the end of the Soviet Union not as a triumph of anti-Soviet reactionaries, but as "naive and inadvertent." 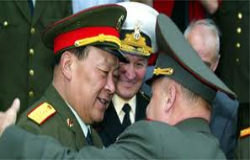 Other anomalies occurred. The "new" Russia did not develop a democratic system, but lapsed into what is today, a one-party state. Curiously, by the mid-1990s the "new" Russia became the leading supplier of China's arms modernization campaign. Many believed that growing Chinese power would force Russia into an alliance with the West. In addition, capitalist activity did not, as many predicted, force China to evolve into a democratic state.

The opposite has happened. China and Russia are firm allies, both are one-party states, both are engaged in Cold War level espionage activities against the U.S., and both are supporting anti-American regimes and movements around the world.

It would seem as though Lenin is in the driver's seat, and he is driving a Cadillac.