July 19, 2011
The trial of Casey Anthony, the budget, and the Republican primaries dominate the "news" and the chatter of the leading talk shows. Iran and Islamic fundamentalism come in as second tier interests.

The ongoing crisis in the South China Sea, Russia's military expansion into the Arctic, the cyber war with China, and Russian/Chinese/Cuban espionage continually perpetrated against the United States are but a few of the dangerous issues rarely, if ever mentioned, by the Liberal/Conservative media combine. 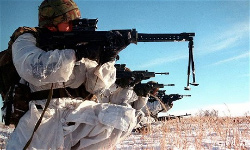 Though the viewpoints differ between those deemed "Liberal" and "Conservative," the topics covered are remarkably similar, regardless of network or broadcast personality.

The absence of coverage of other important issues is a serious threat to the survival of the United States.

In any responsible discussion concerning the security of the U.S., several topics which must be addressed are also subjects having a near taboo quality for Liberals and Conservatives.

Take as an example the soon-to-be defunct space shuttle program. The end of this American scientific and technical triumph has attracted little attention so far from Liberal or Conservative media. This is the case, despite America becoming reliant upon Russia for space travel, and as mainland Communist China applies significant resources to developing its own manned spacecraft.

Little coverage, if any, is given to the joint effort by China and Russia to establish a lunar space station.

Any careful, reasoned discussion regarding the termination of the space shuttle program and America's general commitment to space exploration also demands an analysis of the international political reality of Russia and China as well as the actual nature of the political reality of those nations.

Any consideration of Russia and China must also include those respective nations' aggressive actions against the U.S. and its allies — another topic dangerously under-reported by both Liberal and Conservative media.

While America was nearly transfixed with the Casey Anthony trial and verdict, American allies Taiwan and the Philippines were both being threatened by neighboring mainland Chinese Communist aggression in the South China Sea, yet the Liberal and Conservative media hardly mentioned this potentially explosive situation.

As the Liberal/Conservative media ponder the popularity of the respective Republican presidential candidates, little attention is being given to the genuinely alarming political developments in Russia, or to Moscow's determination to undermine U.S. interests around the world. This is the same post-"reset" Russia upon which America must rely for its space travel for the foreseeable future.

Unfortunately, none of this is new.

For the past 15 years, International News Analysis has been consistently non-PC in covering developments blatantly ignored by the Liberal/Conservative media combine.

When INA began publishing in 1996, Russia was weak and apparently heading into chaos, led by the heavy drinking Boris Yeltsin. China was busy passing itself off as the world's cut-rate manufacturer, and a threat to no one. The United States stood alone as the sole world superpower, unrivaled in economic or military might.

The prevailing opinion among scholars and political leaders was that since the Soviet Union had collapsed, the demise of the mainland Communist government would soon follow.

In 1996, International News Analysis took the unpopular stand of calling attention to developments that did not fit into the approved scenario. INA pointed out that Yeltsin's "new" Russia was arming and training the military of Communist China's Peoples Liberation Army. Although Russia could give little aid to Cuba, Moscow still supported Fidel Castro and his Communist regime.

A few years and millions in U.S. investment dollars later, the Moscow elite gave its enthusiastic support to Hugo Chavez and his pan-American Communist dreams.

Today, INA is still sounding a warning which the Liberal/Conservative media does not want to hear, but which is vital to the survival of America. Russia and mainland Communist China are not the weak nations they once were, nor are they the mutual enemies the pundits predicted. Moscow and Beijing now have several anti-U.S. regimes in Latin America to nourish, and they cooperate around the world to threaten American power and influence.

America must wake up from the numbing sameness of the Liberal/Conservative media monopoly. We must be alert to the world around us. If our nation is to survive, the debate over spending and who becomes U.S. President must also include consideration of the growing international threats around us.

INA needs you. You can help International News Analysis Today continue its work and utilize our 15 years of experience, covering vitally important events the Liberal/Conservative media will not.

THOSE CONTRIBUTING $50 OR MORE WILL RECEIVE A FREE COPY OF OUR BOOK, LIES, TERROR, AND THE RISE OF THE NEO-COMMUNIST EMPIRE — ORIGINS AND DIRECTIONS, AS AN EXPRESSION OF OUR GRATITUDE FOR YOUR SUPPORT.

Your contribution can be made through Pay Pal: