November 13, 2015
Americans praise the bravery and sacrifice of those who have and are defending the nation. Left unsung, and even regarded with suspicion, are the members of America's intelligence community. Ironically, our intelligence services are the first line of defense for America's freedoms. In Russia, that mistake is not made. 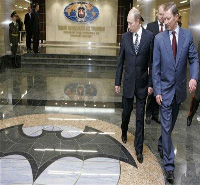 By decree of Russian president Vladimir Putin, November 5 is celebrated as the "Day of Military Intelligence," honoring the past and present members of the Russian military intelligence service, better known as the GRU. Since the U.S. is the primary target of Russian espionage, it is most beneficial to ask what is really being celebrated.

The GRU is a separate entity from the SVR, the successor to the KGB's foreign spy operations, and has become a critical instrument in Putin's foreign policy. The full name of the GRU is the Main Intelligence Directorate of the General Staff of the Armed Forces of the Russian Federation. The GRU's specialties are manipulation, assassination, and clandestine warfare.

Among the official congratulatory statements on the "Day of Military Intelligence" were messages from Russian Prime Minister Dmitry Medvedev and Defense Minister Army General Sergei Shoigu.

Medvedev lauded past and present GRU members declaring that "You often have to risk your lives, but without your information, it would be impossible to make important decisions on the security of Russia." Shoigu told GRU veterans and present personnel that the "stability of Russia's development" depends to a large extent on "effectiveness of your actions...." 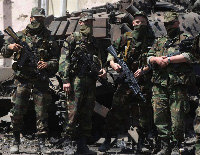 One of the essential elements of Putin's relationship with other nations is what is sometimes referred to as "hybrid warfare." Infiltration, manipulation of the target population, and insertion of special forces are characteristics of "hybrid warfare," and are all GRU specialties. Ukraine is the prime example of the effectiveness of "hybrid warfare" and GRU tactics. Moscow stripped the Crimean peninsula from Ukraine and now threatens to take eastern Ukraine.

As Ukraine continues to struggle for its life, Poland, Lithuania, Estonia and Latvia are anxiously guarding against any sign of GRU infiltration and the early stages of "hybrid warfare."

But what is the motivation behind the sophisticated attacks? What are the "important decisions" which are so dependent upon GRU's bloody "effectiveness"?

The answer lies with Russian president Vladimir Putin. Ruling without any effective opposition, Putin controls Russia's internal and foreign affairs, including the actions of the GRU.

To put it simply, Putin is a communist. He may not, at this moment, belong to the Communist Party of the Russian Federation, but he admires its leader, Gennady Zyuganov and has given him gifts and honors. [see also: A Putin Kind of Communism at http://www.inatoday.com/rus_zyuganov_putin20140630.htm] Putin, as is generally known, bemoans the fall of the Soviet Union, and has whitewashed many of the crimes of the mass murder Josef Stalin.

Putin's use in the Russian government of past and present members of Russia's spy services became so prevalent that, by 2004, former Soviet dissident Elena Bonner, the wife of Soviet physicist and fellow dissident Andre Sakharov, declared that the "KGB" still runs Russia.

Moscow has even continued important aspects of Soviet foreign policy, and continues to give support to the Communist regimes in Cuba, Venezuela, Nicaragua, and North Korea.

Putin is also tied closely to the rabidly anti-American Islamic Republic of Iran, supplying sophisticated arms and supporting Iranian troops in Syria. The GRU, incidentally, is said to be active in Russia's Syria operations.

Upon the return of the Russian spies caught by the FBI in 2010, Putin joined them in singing what is considered the unofficial anthem of the KGB, "Where the Motherland Begins." In one of the stanzas of the song, an individual is hearted to find the helmet his father which was worn while fighting for the Red Army during the Russian Civil War. This is the same Red Army that ruthlessly ensured Bolshevik domination and tyranny. 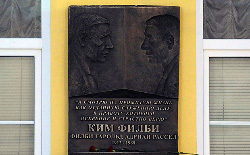 In the same year Putin sang with his exposed spies, SVR officials dedicated a plaque to the British traitor, Kim Philby, who had died in Moscow in 1988, where he lived after fleeing probable arrest in 1963. The plaque is displayed prominently outside of SVR headquarters. The plaque carries a quote from Philby stating," I look back on my life as given to the service of a cause that I sincerely and passionately believe is right." Philby's spying cost the lives of numerous anti-Communist personnel as well as at least one major Soviet defector.

The professional heritage of Putin and his KGB intelligence personnel extend back to Lenin's Checka, which originally stood for the "All-Russian Extraordinary Commission for Combating Counter-Revolution and Sabotage." Founded in 1917, shortly after Lenin's Bolsheviks came to power, the Checka had a well-deserved reputation for bloody ruthlessness. (The GRU was founded in 1918 by Leon Trotsky as an intelligence service for the Red Army. The Cheka and GRU were early rivals).

The Chekist/KGB background of Putin and his government demonstrates the direction of today's Russia. Service to the "cause" continues. The GRU, as an essential tool for the Russian military, loyally follows the direction and instructions coming from the Chekist Moscow government.

The GRU has undergone a major reorganization but remains fundamentally what it was in the Soviet era: a skilled, unscrupulous military spy service dedicated to world-wide Communist victory.

This is the challenge which America and its intelligence services face.

It's long past time to recognize the risks and heroism of our clandestine and counterintelligence personnel, and to admit to ourselves that the fall of the Soviet Union did not end the struggle with Communist tyranny, not in Russia, not around the world – not even within the United States itself.