Leponto, Putin, and the next U.S. president 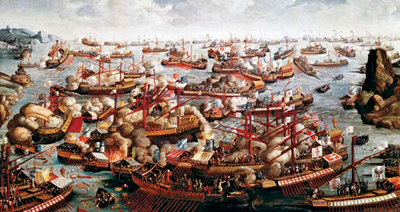 The anniversary of the sixteenth century battle has passed, but America could – and must – learn a vital lesson from the famous battle of Lepanto, which occurred on October 7, 1571, between the Holy League and the Ottoman Empire.

Lepanto was not just another date in history which is to be endured by students who are still taught history. The forces of the Sultan, who led the mightiest army in Islam, and the Holy League, a collection of several Christian kingdoms and city-states in what remained of the non-Moslem Mediterranean, entered into a decisive battle involving the fate of Europe.

If today's odds makers and pundits were alive at the time, the smart money would have certainly been on the Ottomans. No Christian state had won a significant victory against the Sultan's fleet since the 14th century. The major Christian power in the eastern Mediterranean, the Republic of Venice, had seen its colonial possessions torn away in an ongoing bloody and gruesome losing struggle. The Sultan was ready to begin a final assault on Europe and expected nothing short of complete victory.

Quite unexpectedly, the smaller Christian fleet won a decisive victory sinking or capturing most of the Ottoman fleet. Although the Sultan's ships were replaced within six months, the loss of 20,000 experienced sailors and soldiers (as well as the liberation of 12,000 Christian galley slaves) fatally crippled the Ottoman fleet.

While bravery and military skill were indispensable to the victory at Lepanto, there was no doubt among the Christian soldiers and sailors that God had intervened, and that their prayers for victory had been generously answered.

The intercession of The Blessed Mother was fervently sought. The lead ship of the Christian fleet carried an image of Our Lady of Guadalupe, and the Rosary was prayed both on board the ships and at the Basilica of Santa Maria Maggiore led by Pope Pius V.

The lesson to be learned is that God will help those who earnestly and humbly seek His aid.

The concept of beseeching God for help is, of course, not foreign to American history. General George Washington, as the American revolution hung in the balance, knelt in the snow at Valley Forge and sought God's help. Abraham Lincoln, in the midst of the bloody Civil War, still was able to recognize "the gracious gifts of the Most High God" as he declared a national day of Thanksgiving.

In America today, two phenomena have come upon us. One is the numbing influence of the ever increasing secularization of American society; the second is the rapidly expanding influence and military strength of Russia under its president, Vladimir Putin.

Since he first took the office of president of the Russian Federation, Putin has embarked on an aggressive program to build the Russian military and project Russian might across the globe. Russian forces have been modernized and are capable of being used in conjunction with sophisticated cyber operations, as has been demonstrated in recent operations in Crimea and eastern Ukraine. Russian disinformation campaigns are undermining Western European nations and are felt even in the U.S. presidential election. Russian nuclear submarines prowl the waters off our coasts and Russian bombers have flown into Latin America and landed in Nicaragua and Cuba. Moscow has also stated that it plans to open bases in Latin America – what once was "America's backyard."

Russia is highly aggressive in its support of the butcher Bashir Assad of Syria, no doubt in large part to protect its naval support facility at Tartus, which Moscow plans to upgrade into a significant military base.

Even our intelligence officers and diplomatic personnel are in danger of physical assault from Russian operatives. During the Cold War, the Soviet Union and the United States would not harm each other's spies or foreign service officers. That has changed. Recent events have demonstrated that Moscow now has no qualms about beating, intimidating, even terrorizing U.S. diplomates and intelligence officers, not only in Russia but around the world. In one instance, a foreign service officer's apartment was vandalized by Russian intelligence personnel (the FSB, in this case). The attack was so vicious that even the official's dog was killed.

The next American president will have to face an increasingly dangerous world. America is becoming a second rate power with challenges not only from Putin's Russia, but also the Peoples Republic of China, North Korea, the now nuclear Islamic Republic of Iran, ISIS and other bloodthirsty militant Islamic groups.

Unfortunately, secular forces within the United States are undermining any and all public references to religion. Public appeals to God now undergo Supreme Court review. As in the old Soviet Union, God in the U.S. is allowed (for the most part) only in houses of worship.

In today's Russia, God has achieved the status of a department of the Russian government – and closely regulated. Putin understands (and as his predecessor Josef Stalin even had to admit) that no purely secular society can long survive.

As an "ex-"-KGB officer he also knows that God must have limits.

Regardless of who wins the 2016 presidential contest, the American people must bring God back into the nation's life. It's not a well-meaning wish, but a strategy for national survival. God cannot help us if we are reluctant, or fearful, of acknowledging Him. Washington and Lincoln knew that, as did most other American leaders. Whatever "leadership" develops after the election, we the people are capable of turning to God, seek His mercy, and pray for our country.