No Chuck, she didn't "win our hearts." She made us sick to our stomachs. 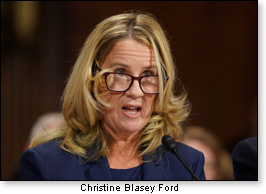 FYI, Chuck: the American people don't like cheaters. And they don't like being played for fools. A 12-year-old could have seen through Dr. Ford's pathetic, amateur-hour play-acting. You'd think that with all the Soros and Clinton cash flowing into the "Resistance," Schumer and Feinstein could have at least come up with a better actress. Apart from the hysterical contingent of Trump-hating, radical, "believe-the-woman-no-matter-what" useful idiots, Americans recognized Ford's testimony as a manipulative put-on.

It's easy to imagine the coaching her lawyers gave Ford: "OK, Christine. Don't worry. We've got you covered. We'll rehearse you. We'll be at your side to help out if they throw you any curve balls. Just pretend you're a 15-year-old girl who's just been sexually assaulted; talk softly in a little girl wispy, raspy voice as if you're on the verge of tears. Be emotional. Be vulnerable. Look like you're in pain. Everyone who watches you will eat it up. Poor little girl! And wear those big glasses so you can peep out from them now and then in a cutesy, little girl way. Don't forget to tilt your head and your body to one side to show you are weak and adorable. Afterwards, we're going to give you a nice thank-you, a big, fat Go-Fund-Me account, so you can smile all the way to the bank. You'll find "civic duty" can really pay off! Ha ha..."

And Chuck, don't think we've forgotten your vow the day after President Trump named Kavanaugh, that you'd oppose the nomination "with everything I've got." What exactly was that, Chuck? A half-baked allegation from thirty-six years ago by a woman who's a Trump-hating Democrat? You thought we'd fall for this? You think we're that gullible or that stupid?

This whole kangaroo court is Schumer's version of Hillary's infamous "deplorables" comment. It amounts to a colossal blunder – for now the utter contempt the Democrats have not only for President Trump, not only for the Senate, and not only for the rule of law, but for the American people, stands revealed in all its naked ugliness. Let's see how that plays in the midterms.

Hey, Chuck, there's something else the American people don't like: sore losers!

That's really what the entire Kavanaugh hearing was about – the Democrats still refusing to accept that She-Who-Must-Be-Obeyed didn't win the election. They figured they could use their Roy Moore ploy – accuse Kavanaugh of being inappropriate with a minor. That oughta work. It worked before. No need even to claim rape. But they ran into a problem since Judge Kavanaugh hadn't dated teenagers as an adult. You can almost hear the Dems' brainstorming session: Well, what about high school? He would have dated teenagers when he was in high school – all we have to do is find one of them who'll make an accusation after all these years. No way to disprove it! An unsubstantiated accusation that sullies the name of a supposedly good Christian man is the kiss of death. Should be a slam dunk!

Thanks for the memory...

Never mind that Dr. 2-Door-Ford couldn't give any provable details about this incident. The vagueness of her story makes me think of the Rogers and Hart song lyric, "Who knows where or when?" Christine sure doesn't. In fact, her story of how many people were there, among other things, went through several permutations. But she remained steadfast on two points: "It was him! President Trump's nominee for the Supreme Court!" And "I had just one beer." Thanks for the memory...

Ironically, the Dem's insistence on a 6th, or was it 7th, FBI investigation of Kavanaugh may have unearthed more than they bargained for. Someone should remind them of the perils of unintended consequences.

Now it seems Dr. Ford had coached a friend on how to beat a polygraph test – another lie, but who's counting – and this friend, Monica McLean, was...wait for it.... spokeswoman for Preet Bharara, a top deputy and trusted aid for ...wait for it one more time – I promise it's worth it....Senator Chuck Schumer.

Folks, you can't make this stuff up. 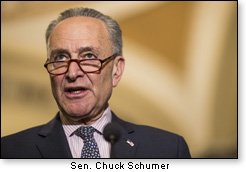 So Chuck, does this perhaps start to sound to you, just an itty bitty bit, like...collusion? It might to the American people, who aren't the clueless pushovers you and your Leftist friends seem to think.

The Democrats apparently have never heard of karma, or the many proverbs in the Bible that mention how evil doings backfire against the perpetrators, or the simplified version in common parlance: What goes around, comes around.

The Blasey Boomerang may go down in recent history as the Democrat's greatest gift to the Republicans since they nominated Hillary Clinton in 2016.

I don't know about you, but I can't wait for the red tsunami coming in November.

Thanks, Diane. Thanks, Chuck. And thank you, Christine.