October 9, 2017
I was raised in a Christian family, attended a Christian University, and have retained Christian faith throughout my life. During Medical School I found that several of my professors and new friends were Atheists. These were good people and highly intelligent, so I became fascinated by the idea of Atheism, and decided to take C.S. Lewis' advice, to see what Christianity looked like "from the outside." I wanted to understand the essence of Atheism and, as an intellectual exercise, to be able to think like an Atheist. Supplemented by my love of science, having an undergraduate degree in chemistry, the following analysis is the end result of my long-term thought experiment:

Science is the process of determining the behavior of matter (the universe) using observation, testing (controlled observation), and reason, with reason defined as the ability to observe, comprehend and accept self-evident truth.

[Reason is] "the discovery of the certainty or probability of such propositions or truths, which the mind arrives at by deduction made from such ideas, as it has got by the use of its natural faculties..." John Locke

"Where revelation comes into its own is where reason cannot reach. Where we have few or no ideas for reason to contradict or confirm, this is the proper matters for faith... that Part of the Angels rebelled against GOD, and thereby lost their first happy state: and that the dead shall rise, and live again: These and the like, being beyond the discovery of reason, are purely matters of faith; with which reason has nothing to do." John Locke

Religion contains faith that an eternal God created matter (the universe) with a finite beginning at the Big Bang. If the universe was not created by God, then where did it come from? We know from the law of conservation of energy that without outside force neither mass nor energy can create its self, nor can mass or energy be destroyed; the sum of mass and energy is always constant in any closed system including an un-created universe. Mass can be converted into energy, and visa-versa, so mass and energy are limited to interchangeability (E = MC2), but according to the law of conservation of energy, outside of supernatural power, only nothing can come from nothing. 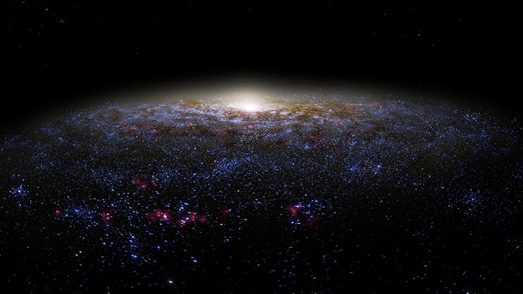 For example, matter-antimatter pairs do not self-generate from nothing because they are both composed of actual mass with either positive or negative quantum numbers. The term antimatter is thus a misnomer because the mass (and therefore the energy) of matter and its corresponding antimatter is equal and additive – not subtractive. There is no such thing as anti-mass. Matter-antimatter collisions do not result in nothing – some of their mass is converted into electro-magnetic energy or into new particles of mass – the amount of mass and energy after collision is in every case equal to that before collision, in compliance with the law of conservation of energy. The reverse process is also true – outside force (God) is required to bring matching matter-antimatter particles (or unmatched particles, or a universe) into existence. Just as matter-antimatter interaction does not and cannot result in nothing – nothing does not and cannot result in paired matter-antimatter. The existence of matter and so-called antimatter requires the energy of creation – or they must have always existed.

In the absence of supernatural power the sum of all mass and energy in the universe must be constant at all times. Thus, in the absence of a Creator God, to be in compliance with the law of conservation of energy, the universe must have always existed, extending eternally into the past, and extending eternally into the future. No person was or could have been present to observe the beginning of a universe with no beginning, so a true Atheist must take this belief on faith, because faith is any belief beyond the discovery of observation. True Atheism is a belief based on faith just as religion is a belief based on faith, so Atheism, like religion, must be forbidden in its establishment by American government, as per the first amendment of our Constitution.

"Congress shall make no law respecting an establishment of religion [or atheism], or prohibiting the free exercise thereof..."

According to scientific law it is not possible for a single photon, electron, proton, neutron or other sub-atomic particle to come into existence outside of supernatural power, much less the entire universe – such belief violates the law of conservation of energy – such belief is thereby unscientific. If the Big Bang represents God's creation of the universe, then Atheism is rendered unscientific because true science-compliant Atheism requires the universe to be eternal, thus Atheism requires an alternate Cosmology such as an infinite series of Big Bangs, a challenge for them since retraction of a spinning universe would violate the law of gravity and angular momentum, and since a non-spinning universe, if ours is non-spinning, might be centrifugally accelerating. Other cosmologies such as the so-called Multiverse represent science fiction since the idea is based on that which is unobservable, but even if there are other unobservable universes the sum total of them all, even if infinite in number, would then be the universe since the term simply refers to everything that is, and even if so Atheist faith requires a so-called Multiverse to be eternal in time. Atheism requires substitution of unobservable science fiction – either an infinite series of Big Bangs or an eternal Multiverse – for observable science pertaining to the Big Bang which is compliant with God's act of creation.