Amy Contrada
Every vote counts - or does it?
Voter suppression in a Massachusetts town

But are all votes really counted and reported? Given all the talk of voter fraud and voter suppression around the nation, every report dribbling out of even the smallest locales is important, shedding light on the many ways our election process has been corrupted. 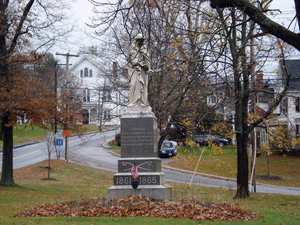 As for my story . . . I did not vote for Mitt Romney. (And all you die-hard Republicans-no-matter-who-the-candidate is, be quiet! Not only do I stand by my principles, but I had the luxury of voting as a Republican in Massachusetts, where O'bama was a shoo-in.)

I did vote for a write-in candidate on a paper ballot: Ron Paul, written very legibly in bold marker. (But no, I did not support him during the primaries, and no, I did not consider him a perfect candidate.)

It doesn't really matter for whom I voted. What matters was that my vote was not officially counted by my local town elections officials!

After the election, I read with surprise the vote tallies in the local newspaper. How many write-ins for President? Zero. My vote was not counted!

Rather than designating write-ins as write-ins, the town uses a category called scatterings — a word conjuring the word scat (animal excrement seen in the wild). I guess that's what my vote resembled in the minds of these officials.

So here's what my quaint little town of Harvard, Massachusetts posted (online and in the local newspaper) as its election results for President on November 6, 2012:


I visited the Town Clerk's office to get an explanation of why I saw no "scattering" votes recorded for President since I knew there was at least one (mine). I asked her to check and she pulled out the official tally sheet with the handwritten count. I saw that there were in fact eight "scatterings" — four for Ron Paul, and four for the blank (with the arrow connected) — in the President category. (Those four blanks were in addition to the 34 ballots left totally blank on the President category.)

At first she said that the town election officials were "not required to report write-ins." I knew this had to be wrong, so I pressed further. She pulled out instructions from the Massachusetts Secretary of State's office which said:


Note the last sentence. Any write-ins other than Reed/Cary did not have to be recorded by name, but the number of "any other write-in votes" needed to be "recorded as 'all others' " — which in the Town of Harvard's lingo would be "scatterings."

By the end of our talk, the Town Clerk agreed that not reporting the four votes written in for Ron Paul was an error, and she said she would submit corrected results. She said the four blanks with the connected arrow would be added to the "blanks" tally.

Why is it important if those "scatterings" were consciously not reported? It shows that the town officials were not correctly reading or following the rules from the Secretary of State. And it left those voters who were dissatisfied with the ballot choices no voice whatsoever.

But it's important for us dissenters at least to have our numbers recorded. Those of us who still had some small trust in the electoral system and showed up to vote on election day deserve to have our voices recorded — at least by numbers, if not by named candidates. This dissent should then be added to those registered voters who stayed home, or voters who "blanked" that race, by the brilliant analysts who will study this election.

What does this example of negligence suggest about the accuracy of the rest of the reported tally? Whether by intent or due to incompetence, it is in effect voter suppression.

If the little town of Harvard, Massachusetts — which has almost 300 years experience in holding elections — can't accurately record and report its 8,000 or so votes, who can we trust?