Anita Crane
'Take my voice with you'

June 26, 2009
The beauty of immutable truth commands a certain silence, and this paradox is reason to see The Stoning of Soraya M., which opens today in select movie theaters across the United States. 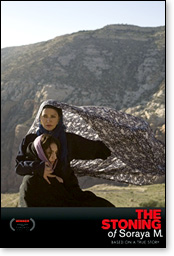 This film couldn't be more timely as our good brothers and sisters in Iran struggle valiantly to triumph over evil.

The Stoning of Soraya M. was originally written by the French-Iranian journalist Freidoune Sahebjam. Iranian-American Cyrus Nowrasteh and his wife, Betsy Giffen Nowrasteh, adapted the book into a screenplay, and Cyrus directed the movie as well.

The film is set in 1986, as Freidoune Sahebjam (Jim Caviezel) is driving through Iran and his car breaks down outside Kupayeh. A bus picks him up and tows his car into town, where Freidoune meets Hashem (Parviz Sayyad) the mechanic, who is depressed and refuses to work until the next day. Later, Freidoune will know why, but he must get to the border by nightfall, so he overpays Hashem to get the job done.

A woman in black traditional dress approaches Freidoune, asking if he speaks English. She is Zahra (Shohreh Aghdashloo), the aunt of Soraya M. (Mozhan Marnò).

The mayor, Ebrahim (David Diann), and the mullah, Sheik Hasson (Ali Pourtash), rush in to chase "crazy" Zahra away and sheepishly welcome the stranger who is dressed in western garb. Freidoune tells them that he must work, so they press him. What does he do? Where does he come from? And will he dine with them?

As Freidoune sits alone in a café, Zahra is able to sneak past a watchman to throw the journalist a bloodstained fabric swatch and a hand-drawn map to her home. When he arrives, she says, "Start your machine. Voices of women do not matter in here. I want you to take my voice with you."

Despite what you may have read elsewhere, The Stoning of Soraya M. isn't about so-called women's rights or any of the other buzz words thrown around by political operatives. Nor is it some screed against Islam or Iran per sé.

Zahra died three years after she met Freidoune Sahebjam, and last year, at the age of 75, he died. Now, because of them and everyone who made The Stoning of Soraya M. into a film, we have another compelling proof of the law that is written in our hearts. So, will you take Zahra's voice with you?