Anita Crane
In 'Hurt Locker,' realism is the special effect
Kathryn Bigelow and Mark Boal talk about their movie

July 10, 2009
Today, The Hurt Locker expands from Los Angeles and New York City to more cities around the United States. From beginning to end, it is an eye-opening, teeth-clenching thriller about a U.S. Army bomb squad, formally classified as Explosive Ordnance Disposal (EOD).

"This film is intense, but the world is intense," said O'Neil. "EOD techs don't give a flip about the political reasons for bombs; they just care about saving lives. These are people who voluntarily take that long walk into uncertainty." 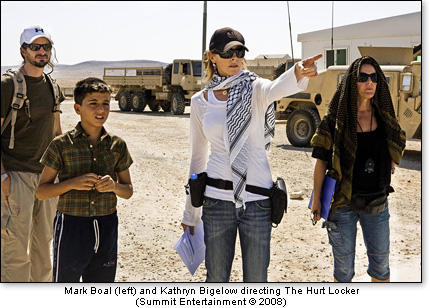 What's her take on the bomb squads? "The fact that these men live in mortal danger every day makes their lives inherently tense, iconic, and cinematic," Bigelow is quoted in the production notes. "And, on a metaphorical level, they seemed to suggest both the heroism and the futility of the [Iraq] war."

"Futility"? We'll get to that later.

Mark Boal's background is journalism, and impressive at that. He co-wrote In the Valley of Elah, which was hailed by movie reviewers as an anti-war movie.

However, that film was based on his Playboy article, "Death and Dishonor," the tragically true story of an Army veteran who found out that his son didn't deserve to join the Armed Forces. (While I hate Playboy, Boal's article is free online and it actually gives a little credence to the old excuse that some men buy this magazine for the writing.)

In 2004, Boal went to Bagdad and embedded with an EOD squad; then wrote "The Man in the Bomb Suit," also for Playboy. That story was about an Army staff sergeant who had disarmed the most bombs in Iraq.

Boal said, "It made a deep impression on me. When I got home, I thought 'people have no idea how these guys live and what they're up against,' and then later I started thinking about it dramatically and doing a fictional story about men who voluntarily work with bombs." He said "hurt locker" is slang for mental or physical pain. Then he added, "I've heard people say, 'When the bomb goes off, I'm gonna be in the hurt locker.'"

In this movie, all performances are captivating. From the moment Jeremy Renner comes onscreen as the new squad leader, Staff Sergeant William James, he gets under my skin  then earns my admiration and affection  and annoys me yet again because I never know what he will do, nor does anyone else.

Boal said, "He's a fictional character, but I did certainly meet soldiers who were willing to take extraordinary risks. And you have to realize that the film takes place in a very specific time, 2004. It's not representative of the entire war."

At one key point in the film, I am baited into longing for James to have peace. However, he smiles to a song by the rock band Ministry; which is frightening to me, but energizing to Bigelow.

"As a filmmaker," she said, "what's very interesting is to either go against what you see or go with what you see. But we had really entered the soldiers' psychology, especially that soldier, so that was the choice that I found to be most relevant."

As the character Sgt. J.T. Sanborn, Anthony Mackey commands immediate respect, but in the heat of combat, he is tempted to do something evil. 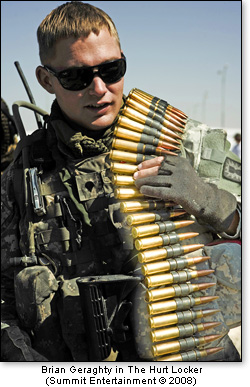 Brian Geraghty's character, Specialist Owen Eldridge, is supposed to be searching and weaker than the other two, but he surprises everyone.

Bigelow and Boal should be proud of the film's intimate documentary feel. They shot it in Jordan, recreating war-torn Bagdad with some 10,000 photos and eyewitness accounts. They also hired refugee Iraqi actors to play Iraqis. Consequently, when James sweats bullets in his 100 lb. bomb suit, everyone  whether ally, enemy, or moviegoer  sweats bullets too.

On the other hand, certain characters lack depth. For example, most of Boal's Iraqis seem menacing and no one shows gratitude for the bomb squad's lifesaving work.

Boal explained, "In 2004, American troops, from the bomb squad specifically, did not have a lot of interaction with the Iraqi public. There were not a lot of translators to go around. Nobody I met in Camp Victory  no American I've ever met there spoke Arabic. ...

"This isn't about the diversity of opinions in Iraq," he said. "That would be a great subject for a movie that someone should do. But The Hurt Locker is about the daily life of bomb squad soldiers."

Furthermore, only one man, a Muslim, has faith.

Boal said, "One of the characters had that component. It was actually based on one of the soldiers I talked to there [in Iraq]. He was very religious and he kept an image of the Virgin Mary in his helmet. But two characters ended up on the cutting room floor, him, and me as an extra. [Laughs]."

As we wrapped up the interview, I asked both filmmakers why people should see The Hurt Locker.

Boal said, "I hope people enjoy it because it's meant to be the kind of movie you enjoy. At the same time, it's got some substance to it and maybe it can be thought-provoking and people will come away with some appreciation of what's going on over there."

Bigelow said, "Perfectly put. I would just add to that even though it's set at a particular time, I hope it will remind people that there are still men in harm's way. If the movie does that, it would fulfill one of our ambitions."

The Hurt Locker certainly honors our heroic bomb disposal squads, but it doesn't prove that the Iraq War is futile. Instead, as retired Master EOD Tech Jim O'Neil said, it proves that "sometimes the news isn't the bomb. Sometimes the news is the silence."