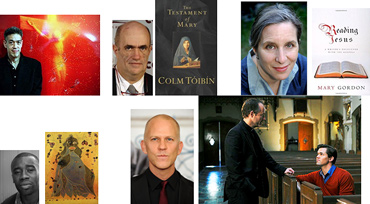 The Edward Tyler Nahem Gallery in Midtown Manhattan recently concluded an exhibition of the despicably offensive Andres Serrano work of trash called "Immersion (Piss Christ)," a 1987 photograph of a crucifix immersed in a jar of urine which Serrano characterizes as a display of his personal love of Jesus, and Jesus's bodily torment on the cross, during which, Serrano believes, not only blood, but all Jesus's bodily fluids, including urine, spilled out. Serrano claims to be offended by the notion that he is an anti-Christian bigot, and asserts that he is, in fact, Christian. Despite Serrano's claims that he portrays Christ as number one in his life by immersing Him in number one, his vile display has been condemned and protested everywhere it goes, much to the dismay of liberal secularists, who see these protests as evidence of religious right-wing fanaticism, narrow-minded backwardness, and even intolerant violence. Only in the warped mentality of the Left does dipping an image of anything in urine constitute a symbol of personal love for the subject of that image. I will venture a guess that not too many people will receive photos of a loved one or themselves dipped in urine this Christmas as a symbol of love and affection.

On November 17th, Simon and Schuster launched an equally despicable 96-page novella entitled "The Testament of Mary" by an Irish ex-Catholic named Colm Toibin which portrays The Virgin Mary as a bitter, angry, bandit who steals to survive and bubbles with contempt for Christ's demented followers to the point of threatening them with a knife. She considers Christ's disciples to be fools and was disgusted by Christ's preaching. She describes Our Lord's crucifixion as some sort of publicity stunt and adds "when you say that he redeemed the world, I will say that it was not worth it. It was not worth it." While this vile trash art has been condemned as well, New York Times feminist reviewer Mary Gordon, in relishing this gratuitous assault on Christianity and its central act of salvation, notes "Mary, the mother of Jesus, has given Christianity a good name. None of the negatives that have made Christianity a byword for tyranny, cruelty and licensed hatred have attached to her...the problem with all this is that it has led to centuries of sentimentality...blue and white Madonnas with folded hands and upturned eyes, a stick with which to beat independent women." Even the blind cured by Christ could have seen, before their cures, that the only bitter and angry fools here are Toibin and Gordon, who have decided to turn the anti-Catholic rage triggered in their formative Catholic years into ex-Catholic venom aimed at re-writing the Christian script to fit their agendas and explain their disgust. Gordon, after all, authored her own rubbish called Reading Jesus in which she accuses Christians of selectively choosing which of their beliefs to champion while ignoring the troubling parts. The problem is, Gordon does exactly what she accuses Christians of doing, and comes off as merely another hostile dissident from a resented Catholic past.

Who can forget the depiction of Our Blessed Mother by Chris Ofili, yet another dissident Catholic, stained with elephant dung on display at the Brooklyn Museum over a decade ago? Like Serrano, Ofili is mystified as to why anyone would consider his work offensive. His painting, entitled The Holy Virgin Mary, depicts The Blessed Mother in elephant dung surrounded by pornographic images. Ofili has stated that he is saddened that religion is used to control people, adding that he believes in God, but is not dominated by it, and that elephant dung is "beautiful."

How many times are Christians supposed to endure this vile use of art as religious bigotry, selectively flung against Christian symbols and sacred figures? These assaults are often made by disgruntled former Christians pretending to be making a point regarding expression or freedom when all they are really doing is taking a shot at the faith they clearly hate so much. They take advantage of a secularist society which relishes mocking and bashing Christianity while foaming of the mouth should any disrespect be hurled at the Muslim faith. Gordon's New York Times, for example, fervently condemned a Danish newspaper's cartoons mocking the prophet Muhammad as "a reasonable choice for news organizations that usually refrain from gratuitous assaults on religious symbols." Had these cartoons mocked Christ or His Blessed Mother, it is clear that the religiously sensitive Times might have run a caption contest to see who could come up with the wittiest one-liners. One supposes that gratuitous assaults on religious symbols are suddenly not offensive when they are hurled at the Christian variety. Such despicable hypocrisy is also cowardice, since we all know what would happen to the Times, Toibin or Gordon should they assault Muslim symbols with the kind of "expression" they hurl at Christianity with such gusto and arrogance. Similarly, odds are that Mr. Serrano will not be dipping any Muslim religious symbols in urine as a sign of respect and love. Gordon speaks of Christianity's tyranny, cruelty, and licensed hatred and beating of women as if Christianity was going around cutting off people's heads, stoning and maiming women, conducting honor killings, and starting riots and fires while being so passionately protected and respected by everyone from the Times to The White House, whose occupant is unlikely to make a U.N. speech decrying disrespect of Christianity anytime soon.

We have neither the space nor the stomach to list in detail how Hollywood contributes to this selective hypocrisy and utter cowardice, partly because this rubbish has become the new normal in this Christian-bashing society to the degree that we even have a new television program called, by coincidence, The New Normal, on NBC, which might as well stand for Non-stop Bashing of Christians. This drivel pretends to have the authority and ability to remake society and, worse still, Christianity, along the secular liberalism so worshipped by the Left. Its October 22 episode entitled "The Godparent Trap" blasphemed Christ and His Blessed Mother; mocked the Apostles, the Pope, and the priesthood; and generally did its best to preach to Christianity how it should conduct its affairs. A homosexual character named Brian was the main vehicle of these insults, in the context of a pathetic and despicable attempt to use confession as a way of getting some answers and clarity. A series of immature leftist lectures replace legitimate, intelligent discourse of authentic Christian viewpoints, punctuated by asinine wisecracks crafted with the usual axe to grind. The openly homosexual creator of this program, Ryan Murphy, has admitted that the show is based on his life including growing up in an Irish Catholic home. Like Toibin and Gordon, Murphy has used his success in the creative world to bash, mock, and openly advocate for the redefinition of Catholicism along radically liberal lines more pleasant and soothing to the Left's ears. Referring to the Last Supper as "twelve dudes sitting around gossiping and drinking wine," Brian later looks at a picture of TheVirgin Mary and spews "Hey Mary — I'm a virgin, too. I've also slept in a barn with three wise men." Turning to an image of Jesus on the cross, Brian says "I'm sorry. I shouldn't be talking trash about your mother. But you know who judges me? Your father."

So there you have it. We are living in a society whose entertainment, artistic, and news venues are dominated and controlled by the Left. These venues shape and define their version of the new normal according to the gospel of secular liberalism, and, are successfully indoctrinating our young in their vision of normality, marriage, family, relationships and, yes, Christianity. Curiously, Mr. Murphy is also the creator of the popular teen show, Glee, and the likewise popular and successful program Nip/Tuck about plastic surgery. All of this is ironic and fitting since, in order to reshape and sell Christianity according to its measures of the new normal, the Left has taken to destroying, reconstructing, and re-packaging the Christian faith, its symbols, characters, and teaching to serve the whims and tastes of the young it indoctrinates. In fact, if people like Serrano, Toibin, Gordon,Ofili and Murphy have anything in common, it is the desire to use their influence, fame, power, and success to reshape Christianity to look and feel as differently from that of their upbringing as possible.

Their endeavor, both drastic and subtle, blunt and sophisticated, bitter and ambitious, is precisely hypocritical because it condemns and rejects traditional Christianity for wrongs it daily ignores from its preferred faith. It is clearly cowardly because it strikes at Christianity with a bitter gusto it would never dare apply to the Muslim religion. Finally, it is certainly predictable because, once one identifies and accepts the bitter resentment and shallow arrogance that feeds its fire, there is no surprise regarding how low it can go, nor how highly a society which sees Christian-bashing as a sport will praise and honor the effort. Imagine the outrage, violence, and public outcries that would ensue had Serrano, Toibin, Gordon, Ofili, and Murphy all targeted the Muslim faith with their art, blasphemy, and mockery. Switch the target to Christianity and those outcries become awards, praise, fame, and fortune.

As proud and committed Christians eager and dedicated to defending our God, our Lord, our Lady, our teaching and our faith , we may consider that those who see Christianity in general and Catholicism is particular as entertaining targets of ridicule and blasphemy assume that we will turn the other cheek. As champions and warriors for that faith who will not meekly accept such disrespect, we may suggest that those who enjoy bashing what we hold so Sacred can kiss our cheeks instead.