Warner Todd Huston
What Obama means to the enemy

January 26, 2009
Terrorists, murders, oppressors and Islamofascists understandably were not very fond of George W. Bush. Neither were the fellow travelers of the aforementioned lowest rung of the human ladder in Europe, those in the offices of the ACLU and the Democratic Party fond of our late president. This is well understood. But what does the ascension of Barack Hussein Obama mean to them? More importantly, what will what it means to them mean for us? 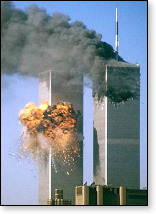 We have been told by our sycophantic Old Media establishment that Obama is a gift to the world, "our" gift to the world. We are told that he is the one we are waiting for. The L.A. Times, for instance, featured a purportedly heartwarming, post inaugural story of three complaining immigrants to the US that seem to imagine that Obama's presidency will bring them a new era. One complained that we didn't let him into the U.S. soon enough from the terror producing country of Pakistan. One said we are hated in the world, but Obama lifts that veil. Another whined that working here was no longer a key to success because the country is a failure compared to what it was for immigrants 30 years ago. All three are Muslims.

They, each of them, appear to imagine that Obama will somehow make things different for them. But, what could Obama do that is so different from what Bush did? For that answer we might turn to a recent op ed by Dr Ikram Azam in the Pakistan Observer.

What Azam's basic point boils down to is that these people expect Obama to begin healing the world by "respecting his Islamic-Muslim paternal origins, roots and mornings." Azam expects Obama to recognize "realistically that Islam is the Perennial Peace Paradigm." In other words what these people believe is that Obama will create a new Muslim power base in the United States or, at the very least, rely on Islam to guide his presidency. Azam couched much of his rhetoric in appeals to "democracy" and "consensual government," but with the long tradition of double speak, or takiyah, that Muslim writers constantly couch their missives to the world in, it is a bit hard to separate his desire for Obama to act the good Muslim and at the same time believe he really wants to help foster democratic government at home or even work with our own abroad. But, even if Azam can be taken at his word that he does, indeed, want peace on a mutually determined basis in keeping with both Islam and western culture, his is a lonely voice. In any case, it is hard to ignore his assumptions that Obama will be driven by some underlying Islamic premise.

To fulfill an early campaign promise to the extremists of the American left that supported his candidacy, Obama made a show of signing an executive order  one that he can easily revoke at any time  to next year close the terrorist detention facility at Guantanamo Bay, Cuba. Obama has made no provisions at all to place these terrorists and murderers anywhere else and since January 22, when Obama signed the order, speculation has been rampant about where these evil men shall end up.

Within in a day of Obama's acquiescence to those of his constituents unconcerned over terrorist attacks on American soil (or anywhere else for that matter), news that two of those already released from the facility at Guantanamo Bay have again returned to their terrorist brethren and taken up roles as leaders of al Qaeda. Former detainees Abu Sufyan al-Azdi al-Shahri and another have since turned up on new al Qaeda videos once again spouting their Islamofascist hatespeak. This singular fact of the reappearance of former detainees renewing their association with al Qaeda would rather speak to the efficacy of Guantanamo Bay as opposed to its illegitimacy.

Another recent story, also reported within days of Obama's signing of the order to close Guantanamo, bespeaks an ill wind for the alternate idea that Obama and his supporters have used to undergird their own concepts about what to do with terrorists and those accused of terrorism. Namely, treating their crimes as average criminal actions that should be dealt with by our civilian judicial system.

In 1973 a terrorist named Khalid Duhham al-Jawary built three powerful car bombs and placed them around New York City. Fortunately, his plot failed and he was captured, tried under our criminal justice system, and imprisoned. But, now his 30-year sentence is up and the officials in New York will be compelled to release him with time served.

Now, whether this particular man is still dangerous and filled with hate for America or not, the basic point that we can take from this story is that he is being released as if he is now ready to reenter society, his debt paid like any other criminal. And this is the same fate that might befall any number of terrorists that would be prosecuted by our criminal justice system. We may find safety from these evil men for a time, but by virtue of our own system we will have to release them right back to their terrorist activities at some point.

In other words, Obama's plan to treat terrorism in the same way we'd treat bank robbery or jaywalking is not an effective means of truly stopping terrorism.

And this gets us back to what Muslims seem to expect of an Obama administration and what, at least at this point, it seems he is poised to give them. And that would be a far, far less strenuous focus on stopping Islamofascist terror. They certainly expect him to give their desires, ideals and policies a wink and a nod and a friendly ear.

This will surely put America in danger.

And that is just what they hope Obama will facilitate.