April 10, 2009
This is just the sort of bias against Sarah Palin and her family that is de rigeur in the Old Media. CBS seemed taken aback in an April 6 report that Governor Sarah Palin could possibly still be relatively popular "despite the negative news" that she has been confronted with of late. But all the "negative news" that CBS is so sure should torpedo Palin is little else but the soap opera of family struggles, none of it is based on any substantive issue that is a result of her actual efforts in office. It appears as if CBS wants to see Palin destroyed because some of her extended family have seen troubled times of late and not on the actual work she's done as governor. 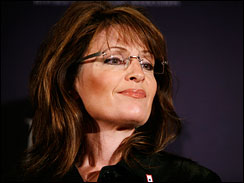 Is CBS really that empty of substance that they'd ignore the real and important issues of Palin's governing and focus only on Bristol boyfriend Levi's snotty appearance on some meaningless TV gossip show as a way to rate the governor's work as chief executive of the state of Alaska? Can they not separate the actual work of a governor from the side-show of her family?

Or more to the point, would they rather not so separate the family from the job?

The headline sums up the astonished gossips at CBS quite well:

Palin Popularity High Despite Latest News  Hovering At 60 Percent At Home; Negative News On Extended Family, Acquaintances Not Hurting Her

Can't you just hear the jaws dropping at CBS? Apparently, CBS feels that because a teenaged girl was dumb enough to get herself pregnant by a lout without a job or a direction in life, we should throw her governor mom out on her ear. Does any one else see the disconnect in this?

CBS revisits the salacious details of Levi's trip to the empty wasteland of the Tyra Banks show, saying "eyebrows were raised" as he did so. The CBS piece goes on to detail all the he-said-she-said stories about Levi, Bristol, Tripp and the legal troubles of Palin's sister-in-law. Sentence after sentence, paragraph after paragraph of this inconsequential gossip is juxtaposed against CBS' amazement that Governor Palin still has that 60% approval rating.

And then this meaningless tidbit:

Add to the personal drama a political hit from former running mate John McCain, who hedged on endorsing her for the 2012 Republican presidential nomination when given the chance on "Meet The Press" last month, saying he'd "have to see who the candidates are and what the situation is at the time."

But, after reading and re-reading this CBullSpit report, one cannot escape the feeling that something is missing from the investigation of Governor Palin's work as governor and her approval rating.

What is missing is any discussion at all about Governor Palin's budgeting, her healthcare policies, her plans for the energy sector, her work with the legislature. In fact there isn't any mention at all of what she's done as governor. There is no true measure of her approval rating as chief executive anywhere in the piece. To CBS, it appears as if the SOLE criteria upon which to base any assessment of her work as as governor should be her family troubles.

CBS wants Palin's executive work to be judged by the family struggles of her sister-in-law, Levi, grandson Tripp, and daughter Bristol. So they are amazed that Palin is still looked upon favorably despite their own best efforts to drag her and her family through the mud. "But... Palins' approval rating is over 60 percent in Alaska, so she's hardly out in the cold among her home state's voters," CBS says in astonished summation.

Now, I seem to recall a certain president that cavorted his way from Arkansas to the White House treating women as object and humidors throughout. I also seem to recall the left screaming that attention to Clinton's sexual dalliances was "not relevant" to the job he was doing as president. They wanted his personal comportment separated from his job as president. Yet now we have CBS essentially reversing that quotient by focusing only on Palin's family troubles and not on her job as governor.

I don't know about you but that seems just a tad hypocritical, doesn't it?

There is one lesson that CBS learned well from President Clinton, though. They picked up his lessons on the politics of personal destruction quite well, now didn't they?

On a side note, I would like to say a word about the AP photo that CBS used to illustrate this story (the photo I appended to this post). It is the perfect example of a subtle slam on the governor. Look at that picture. It seems haughty, as if she is turning away from the viewer as if to say, "Yeah, so what? I'm better than you." It is almost a stuck-up, self-satisfied demeanor evinced by Palin when considered in light of the story. It is a perfect example of a choice of a picture made in a subtle attempt to make her look bad.