January 28, 2010
I was excited to be able to snag an interview with the head man  or rather woman  in President Obama's TelePrompter crew, Ima Prizenteur. Her official title is Special Assistant to the President for Elocutionary Support but her crew is best known as the Spiel Team. It is Ima's responsibility to set up the ubiquitous dual TelePrompters at every venue at which the president is to speak. 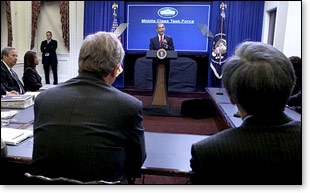 I spoke to her by phone from Washington D.C.

WTH: Hi Ima, great to talk to you.

WTH: So, what is it like being the one in charge of Obama's voice?

Ima: It really is exciting. I never thought when I was going through prep school that I'd be flying all over the world working for the president of the United States.

WTH: Well, you are from a pretty politically connected family, aren't you? It isn't like you've never been to D.C., right?

Ima: Well, yeah. But it is still exciting even though we all in my family expect to be part of the ruling class. Still, it's a pretty cool job.

WTH: How long have you been doing this job, anyway?

Ima: I've been with President Obama since he began his run for the presidency in 2004. My mother is with ACORN and we saw his promise right away. And I was on the Spiel Team since if first started, though I have only been the SAPES since the election.

WTH: Where is the most interesting place you've been to set up the TelePrompter?

Ima: It was really cool to go to Copenhagen, but it was also great in Germany. I was told once that we were going to England, but for some reason the President canceled that visit. He said England wasn't special enough to go there. It's pretty boring setting it all up in the U.S. but Europe is a dream.

WTH: What was the strangest place you've set it all up? 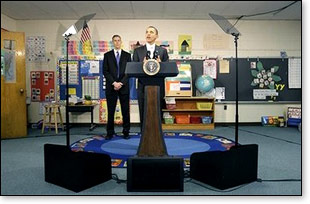 Ima: Well, that grade school the other day was kinda weird, and... well, I probably shouldn't say it, but once he had us set it all up so that he could delivery a dinner speech... but, well, the only guest was Michelle... er, Mrs. Obama. We weren't allowed to run a test to see if the speech was displaying right that time, though. The next morning when I tore it all down they were in the first couple's bedroom instead of the dining room where we set them up. I'm stumped on that time one, I have to say.

WTH: What's the hardest part of the job?

Ima: Well, Getting this office set up was hard. I mean, the former administration left this office in a mess...

WTH: But, how important was that office when...

Ima:... it was just a mess. Barack knows what I mean. Heck they didn't even HAVE a SAPES before I came along! Imagine! But, also just keeping all the TelePrompters going is tough. I mean, they are in such constant use that we have to have five or six backups at any given time. The manufacturers say that we are severely overtaxing the systems of these things. They just aren't made to be used so much, I guess. We probably buy a new one three times a week just to make sure we don't have another black Tuesday.

Ima: Yeah, we shudder every time we think of that day. Remember that Tuesday last July when the TelePrompter broke to pieces live in front of the whole world? We almost all got fired for that. As it was Obama fired Bob that day.

Ima: Yeah, Bob. He was our white guy. Anyway, that was a day that will live in horror for us Spiel Teamers. Since then we never use the same TP twice  that's what we call TelePrompters, TPs. No one wants to use the same TP twice these days. When Obama's TP talking we don't want anything to go wrong, ya know?

Ima: Sure it's expensive. But it isn't like it's costing anyone anything, right? It's just tax money and stuff. I mean, they are only a couple of thousand or so apiece. So, we are only buying about three or four new ones a week and with our $2 million a month budget that's hardly anything. I hear we are getting a deal on them because we buy in bulk, anyway. Some company in China has been giving us a great deal.

WTH: Do you think that this is going to be a long term career for you?

Ima: I kinda doubt it. No one else in the world uses a TelePrompter even to have dinner with his wife, ya know? I would think that once Obama leaves office I'll have to go back to working for ACORN or some Democrat Senator again. It's not like I'll be hurting for cash. I'm just doing this because it is a great opportunity to serve in this historic presidency.

WTH: I see. Well, for my last question and I want to thank you for taking the time with me, what will you miss most when this job is all over?

Ima: Well, everything is free, ya know? I haven't had to spend a penny since I got to Washington. I never knew how generous the government is, I mean, I've been told my whole life that the government is our enemy, but man it sure seems like it's all gravy with Obama in office. He really WAS the one I've been waiting for!

Ima: Happy to talk to you.