Cynthia A. Janak
The truth about the HPV vaccines or what they do not want you to know (Part 2)

June 12, 2010
As I promised I am going to address the global concerns that were presented to the FDA and the question "My daughter is now sick after the HPV vaccination and has warts on her hands and feet. Is HPV really only an STD?"

As we all know Gardasil is administered in the United States. It is now licensed for use under the name Silgard in 120 more countries. In Spain, the Netherlands and in over 100 countries Cervarix is administered.

When reading the many reports of girls adversely affected it becomes quickly evident that the symptoms they are experiencing are part of a pattern of events that are similar wherever the HPV vaccines are administered around the world.

The occurrences are happening months to years' post vaccination. Freda Birrell was instrumental in putting all this data together for the FDA presentation. 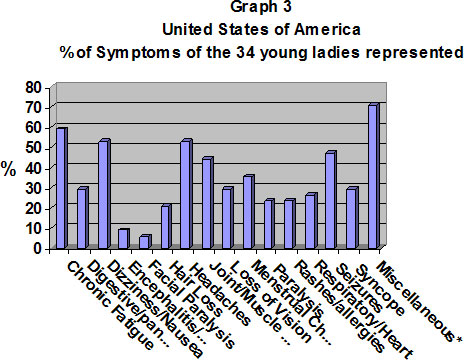 As you all know the HPV vaccine that is mainly used in the United States is Gardasil. As you see here with the girls represented many experienced chronic fatigue, dizziness/nausea, headaches, joint/muscle pain, changes in the menstrual cycle and seizures.

According to the CDC these side effects come under the heading of "Non-serious adverse event reports." This is their comment on this.

The vast majority (92%) of the adverse events reports following Gardasil vaccination have included fainting, pain, and swelling at the injection site (the arm), headache, nausea, and fever. Fainting is common after injections and vaccinations, especially in adolescents. Falls after fainting may sometimes cause serious injuries, such as head injuries, which can be prevented by closely observing the vaccinated person for 15 minutes after vaccination.(1)

I wonder what they would say if it was their daughter lying on the couch in severe pain with a migraine or having a seizure. I bet that they would be singing a different tune as they sit by helplessly as their child suffers and the doctors are telling you it is "all in her head." Feeling the pain and heart ache of knowing that if you did not allow the vaccination your daughter would be going to school, out with friends and giving you a hard time. You would do anything to hear her argue about going to the mall after school, etc.

This is what is happening today in thousands and thousands of households across America and the world.

Graph 4 shows the adverse effects that the girls in Spain are having after HPV vaccination. In Spain they are using both Gardasil and Cervarix. 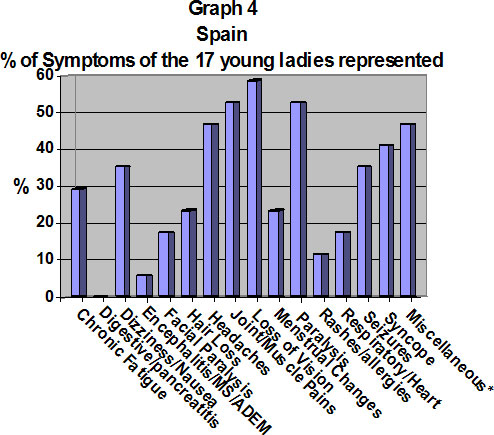 Their main symptoms are chronic fatigue, dizziness, headaches, joint/muscle pain, loss of vision, paralysis, seizures and syncope. You can see that loss of vision and paralysis are pretty high in this group. One can only surmise that it is the inclusion of Cervarix. There are many reports in regards to Cervarix that reference vision loss either temporary or permanent. The same goes for paralysis. That can be either permanent as in the case of Ashley Cave from the UK or temporary as has been reported.

Still the CDC, ACIP and the FDA do not see any similarities between the HPV vaccines. In this document "FDA Licensure of Bivalent Human Papillomavirus Vaccine (HPV2, Cervarix) for Use in Females and Updated HPV Vaccination Recommendations from the Advisory Committee on Immunization Practices (ACIP), May 28, 2010 / 59(20);626-629" The only data referenced are the flawed reports that were submitted by Merck and GlaxoSmithKline to the FDA. I will get into this in a future article.

Now I want to answer the question "My daughter is now sick after the HPV vaccination and has warts on her hands and feet. Is HPV really only an STD?"

I can with all confidence say absolutely NO! GSK and Merck believe differently and both state that HPV is a sexually transmitted disease. It makes me wonder what their hiring conditions are because we were able to find scientific evidence that HPV is not an STD.

The HPV vaccines were developed with the purpose of preventing cervical cancer in women who have not been previously exposed to the HPV types in the vaccines.

To achieve maximum benefit vaccination should occur before sexual debut.

In the first research paper there is growing evidence that HPV infection is acquired through non-sexual routes and that one potential route is mother-to-child transmission in the perinatal period; referenced as vertical transmission.

"Although epidemiological trials suggest the possibility of non-sexual transmission, there is evidence of vertical transmission, presumably occurring during passage of the fetus through an infected birth canal. The virus could also be transmitted by ascending infection, principally after premature rupture of membranes. Pg. 1006"

In the second paper, it was noted that HPV's have been detected in virgins, infants/children, and juvenile Laryngeal papillomatosis was shown to be caused by these viruses. It has been acknowledged that HPVs may be transmitted by other non-sexual routes as well.

"Introduction of the polymerase chain reaction (PCR) revealed that HPV infections are much more common among young asymptomatic women than it had been previously suspected. The side-specificity of genital HPVs led to the assumption that HPVs were primarily transmitted by sexual contact. However, since HPVs have been detected in virgins, infants/children and juvenile laryngeal papillomatosis was shown to be caused by these viruses, it became acknowledged that HPVs may be transmitted by other  non-sexual  routes as well. Pg. 511"

The research papers in the Journal of Medical Virology from scientists at King's College, London indicate additional points of concern. The first entitled "High prevalence of human papillomavirus type 16 infection among children" raises a very important statement: "Before immunisation programmes can be designed, however, it is necessary to know the age of acquisition and all routes of infection for these viruses."

"Before immunisation programmes can be designed, however, it is necessary to know the age of acquisition and all routes of infection for these viruses. Sexual transmission is well documented and vertical transmission has also been demonstrated, although the frequency of transmission remains controversial. We previously showed that vertical transmission frequently results in persistent infection, and now present data on the prevalence of HPV-16 DNA (the most prevalent high-risk HPV type) in healthy children."

This important statement demonstrates that infection can occur without sexual contact.

This paper also documented that HPV-16 DNA was detected by nested PCR in 138 of 267 (51.7%) samples. This means more than half of the samples that were taken were HPV 16 positive.

The second paper from King's College entitled "Buccal exposure to human papillomavirus 16 is a common yet transitory event of childhood." This paper cites two groups of children being tested. In the first group there were a number of children who were tested as being negative. 30 months later, a second oral swab was collected from each child. On this second testing, 40% of the HPV16 positive group had no detectable HPV 16 DNA; conversely, 63% of children who were originally HPV16 negative had now acquired the virus. The overall conclusion is that HPV16 DNA in the oral cavities of children is a transient event and is most probably acquired through their peers.

"It is concluded that HPV-16 DNA in the oral cavities of children is a transient event and is most probably acquired from their peers."

These infections may pass quickly enough through the bodies of these young children but if they are vaccinated while infected then the reality is "If infected then not protected."

Going back to the CDC/ACIP report it states "Prevaccination assessments (e.g., Pap testing or screening for high-risk HPV DNA, type-specific HPV tests, or HPV antibody) to establish the appropriateness of HPV vaccination are not recommended at any age."(2)

"Females should be advised that vaccination will have no therapeutic effect on an existing HPV infection or abnormal Pap test."

They have got you coming and going with these statements. They know that a parent is not going to have their 9 to 12 year old daughter submit to a pap test because of the mental trauma that could scar them for life. These little girls would feel as if they had just been sexually abused by the OB because they do not know any better and are too young to understand the reasons anyway. The other thing is that most parents do not feel it is appropriate to talk to girls at this young age about STD's.

There are many reports in the VAERS (Vaccine Adverse Event Reporting System) database that mention the occurrence of warts. These warts are appearing in various parts of the body. I have seen reports of warts on the hands, feet, back, head, arms, etc. The other item of note is that in many of these cases the report states that there is no medical history of warts. So my question is "If there is no history of warts, how does one acquire this condition right after vaccination?"

What is not known is whether the HPV could lay dormant similar to the Chicken Pox virus which later in life can cause shingles? This could be the reason why warts are popping up after vaccination. These young people may have been in contact with someone when they where children in what is termed a transient event by vertical transmission. If these children would have been tested and I do not know if a test is available, for anti-bodies to HPV types related to warts then maybe these young people would have never received the vaccinations.

In part 3 of this series I am going to answer the question "My daughter has received an irregular pap test two years after the vaccination series. I thought the vaccine was supposed to prevent this?" This is something that we are now receiving more and more reports of. Just recently we saw that there is a report on the VAERS data base that stated that a young 32 year old female vaccinated with Cervarix "was diagnosed with adenocarcinoma" (cancer).

This will be totally explored in part 3 and the results of our findings will shock you.

(2) FDA Licensure of Bivalent Human Papillomavirus Vaccine (HPV2, Cervarix) for Use in Females and Updated HPV Vaccination Recommendations from the Advisory Committee on Immunization Practices (ACIP), May 28, 2010 / 59(20);626-629 http://www.cdc.gov/mmwr/preview/mmwrhtml/mm5920a4.htm