Cynthia A. Janak
Does the mainstream media slant the truth about the HPV vaccines? Part 1

May 17, 2012
I find mainstream media to be comical because they slant the facts to suit their own agenda. You have these proclaimed experts tout the benefits of the HPV vaccines but yet in their own reporting they either omit important facts or they, in my opinion, use erroneous data.

Every time I read one of these articles I just shake my head and giggle because of these errors by omission. This further proves why I will not buy a newspaper or read the main tabloids online anymore. It seems that they do not give the unbiased truth.

The first thing I noticed was what he said about what he does. He believes that "this is biology's century." That means better living through chemistry to me. He doesn't see the trend towards healthy eating with natural foods. You see even commercials on the television often about "all natural" foods for our pets. So from this first statement I feel that he is out of touch with what is becoming the trend in regards to our health. No wonder his article is flawed in my opinion.

It is my opinion that my readers want all the facts so here are the amounts.

Moreover, the ―Bloomberg News‖ reported on the millions of dollars spent in early 2006, prior to the FDA approval of GARDASIL, as follows: ―in the first quarter this year, Merck spent 107.3 million dollars on all its advertising, including $841,000 for Internet ads on the human papillomavirus...Merck also bought 295 TV advertising spot‖(Blum, 2006). The PSAs reinforced Merck's message on HPV and cervical cancer with celebrity endorsements, paraphernalia, and significant television rotation.(2)

I have not been able to find the amounts used on their lobbying of this vaccine to our legislators due to limited resources and unable to add that amount to the total. That must put this all into at least the half billion dollar range. I call that excessive. Think of all the benefits that money could have brought to the people in other countries that do not have access to adequate health care, clean water, nutritional foods or shelter. These things are not being pursued but vaccines are being administered.

How does this compare with other vaccine advertising I really do not know because the only vaccines I have seen commercials for is Gardasil® and for Whooping Cough? Maybe, Mr. Herper could do a little research into that.

At this time I want to get into the ethics of the Gardasil® campaign.

Based on the above analysis of the ethical questions surrounding this topic, this paper contends that mandatory vaccination for any population should not be pursued. This decision is primarily based on the principle of justice. Making HPV vaccination a mandatory requirement for attendance in school without government funding would lead to further inequity among the wealthy and poor of the U.S. Doing so with government funding, will overtax government budgets while failing to address the root causes of deaths due to cervical cancer, access to healthcare. Given the limited resources of our country and the world, there are better alternatives for reducing cervical cancer incidence and mortality besides GARDASIL at this point. These include education, condom distribution, regular visits to a physician, and routine Pap tests. (8)

Again, this segment was important to add because throughout the duration of this research project, I found minimal work written by or including the perspectives of young women and girls. Yet they are the demographic that is being targeted by the GARDASIL® lobbying and marketing campaigns. Young women's voices were mostly marginalized from the debate, except through these creative media such as the YouTube videos and mock print advertisements. (9)

Consumption feminism is not new. Merck's co-opting of liberal feminist language, women's movement gains, and girl-power images to make profits off of the bodies of girls and women is a part of continuum of marketing schemes that have done the same successfully. Merck's use of language such as ―choice in the context of women's health is affixed in the popular imagination to feminism and ―pro-choice activism. I assert that feminists must continue to be ever vigilant of these moments, especially the ways that these sites of power (in this instance Merck & Co.) use their power, and how women are affected both pro and con. Moreover, I envision a feminist response that would courageously require ―Big Pharma to be accountable to women and girls through ensuring the highest ethical standards of their products including their outreach/ marketing campaigns. (9)

During the Republican debate, Governor Perry denied Merck's political influence, stating that he received only $5000. However, Merck donated $28,500 to his gubernatorial campaign and an additional $377,500 to the Republican Governors Association, for which Perry served as chairman. Furthermore, Merck's lobbyist at the time of the executive order was Governor Perry's former chief of staff (Gostin). Perry's decision was an egregious abuse of state power, and was rightly questioned and exposed at that time. (9)

I would like to know why the constant pursuit of women when undoubtedly the main source of the problem with cervical cancer is the lack of understanding, information and access to proper preventative treatments. To me this shows a flaw with the ethics being pursued by doctors and the pharmaceutical companies considering we do not know if the vaccine will truly work for many years. We do know that HPV is present in the cancer. It has yet to be proven that HPV is the actual cause of cancer. It is my belief that what we have here is a novel vaccine targeting a certain population with the efforts to make a profit for the shareholders.

Back to the article.

This next quote deals with clarity on the part of Mr. Herper. "It's absolutely clear that these are for the most part not side effects from Gardasil." I found this hilarious. It is plain to me that he did not research the report to the FDA from Merck. (7) Because of this he did not see the section called "New Medical Conditions." I am going to post the tables (7) here for all to see.

This is just further proof that Mr. Herper did not do what I call adequate research into this topic. As you can see that there is a myriad of side effects listed and if you go to the VAERS (Vaccine Adverse Event Reporting System) (4) you will see many are listed and new ones are being added.

This document is 187 pages long and I was scanning this document for adverse events. I did find something interesting starting on their page 132; it was Table 73, titled "New Medical Conditions" Days 1–15

The first table presents the systemic clinical adverse events in the 15 days after vaccination for subjects in studies 007, 013, 015, 016, and 018 in the Detailed Safety Population (subjects 9-26 years of age). This was the group who were followed with Vaccine Report Cards.(3) 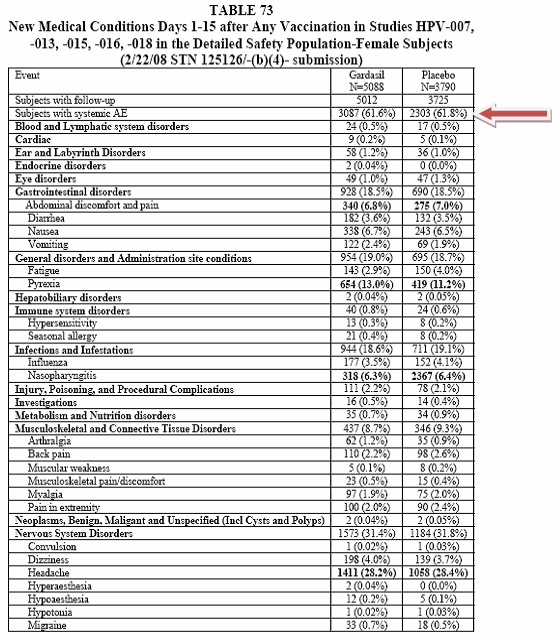 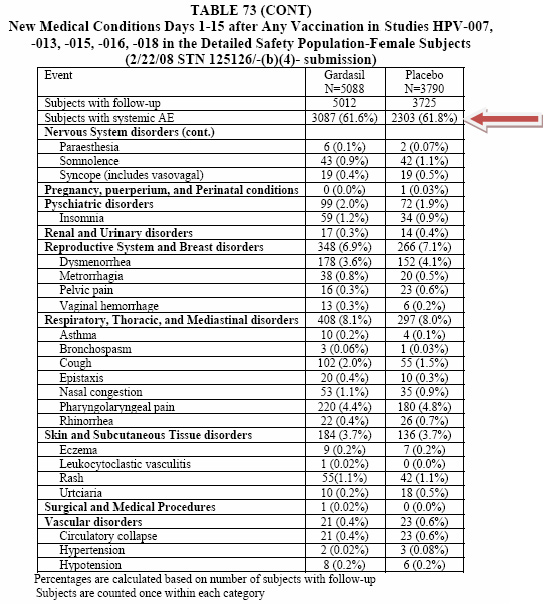 Reviewer's Comment: As noted in Table 73 above, the number of adverse events in each treatment group is comparable. The most common adverse events in either treatment group included headache, pyrexia, abdominal pain or discomfort, and nasopharyngitis. The proportions of subjects with each of these adverse events are bolded. When the original application was reviewed, focus was given to the subjects in the Detailed Safety group, because the proportions of subjects reporting a specific adverse event was higher than those reported in the entire safety population. The adverse events included in Table 73 above within each System Organ Classification represent the AEs that were reported most frequently in each group, or include adverse events that were reported in the post-marketing period (so as to provide information about adverse events of interest which occurred during the clinical period). The table of systemic events in the revised package insert includes those in which the proportion of events was higher in the Gardasil group as compared to the control group, but even though headache occurred more often in the control group, it was felt important to include information about this event within the package insert.

Now take a look at this table. It also shows "New Medical Conditions." What gets me upset with this table is that 73.3% of the Participants in the Gardasil group and 76.3% in the Placebo (carrier solution with/without aluminum) group ended up reporting that they had new medical conditions after the vaccination. Here is this table. 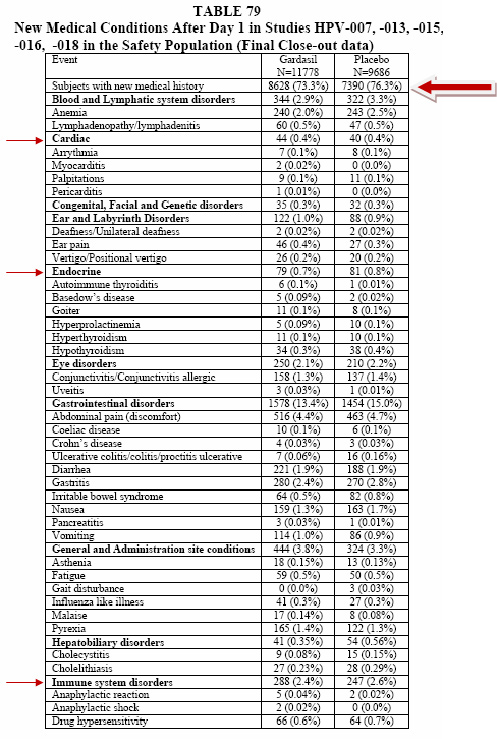 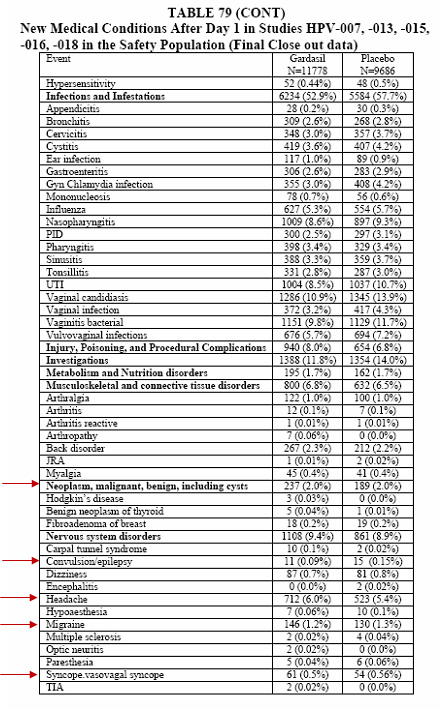 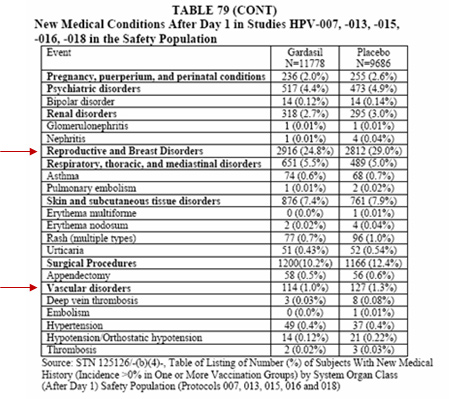 Reviewer's Comment: The proportions of subjects in each System Organ Class were comparable. The most common conditions reported were pharyngitis, upper respiratory infections, and influenza. There was a higher proportion of subjects with abdominal pain in the Gardasil group (5.0%) as compared to the saline placebo group (2.7%).

Astounding isn't it? When I first saw this I could not believe the incidence rate of 73.3% New Medical Conditions that occurred in the healthy participants of this trial. Unfortunately for the readers of Mr. Herper's column they will not know this because he either did not know or he just did not think it important enough. We may never know the answer to that one.

"A great many of these reports can come from sales reps for drug manufacturers who hear about the incidents." He saved himself by adding the word 'can' so he does not know for sure. If he did look at the reports I wonder what reports he was reading. I have been working with this data base for a long time and I found, comparative speaking, few reports came from drug reps and many from doctors, nurses and parents reporting to this data base. I wonder if he is using the same data base that I am.

I want to apologize for the length of this article but the truth and the facts need to be known and when a person who calls themselves a journalist gets it wrong then I feel compelled to put the record straight. Part 2 will be available in the next few days but there is a real possibility that there will be a Part 3. All references will be at the end of the final article.

Concerning the HPV vaccines you have to make your own decisions. I only ask for you to do the research and decide if it is right for you and/or your children. I am presenting the other side of the story.