Cynthia A. Janak
The truth about the HPV vaccines or what they do not want you to know (Part 7)

July 29, 2010
For those of you who have come to this article for the first time I would suggest that you start at the beginning of this series. All the information that was presented to the FDA on March 12th of 2010 starts with the information about HPV. My feelings are that it is best to get the whole story and not just part. Anyway, I want to thank you for being here.

For those of you that have been following this series I want to apologize for the delay in continuing the series. I have been diagnosed with rheumatoid arthritis triggered by a medication. The RA acted up in my hands making it difficult to type effectively so I had to stop for a little bit. It is better right now so here I am continuing the saga of the HPV vaccines.

In continuation, here is part 2 of "I am 18 and my friends and I received the Gardasil series. Why do I have an autoimmune disorder and they do not?"

As I stated in my previous article that "we determined was that there are three groups of young women that could be affected when they receive this vaccination series. They are:

Our research also found that there were three recurring reasons why the girls adversely injured had the potential to be affected; family history of allergies, elevated testosterone levels and hormone cycles."

One of the subgroups of females affected by the Gardasil vaccine is those who are overweight. The relationship between this group and the athletic girls is once again, the hormone testosterone.

During the course of our interactions with overweight females it has been noticed especially with dark haired females that they have a certain amount of facial hair. This could be evident with a few strands on the chin or a mild mustache. Many have hair extending from above the ear to just above the jaw line. This is known as Hirutism and is caused by hormone imbalance.

In the publication from the Johns Hopkins University it is mentioned that "greater circulating levels of testosterone" as an important contributor to certain disease conditions. This elevated testosterone level in females could also be a contributing factor to why some of the girls affected by Gardasil happen to be overweight. (1)

When I was researching this topic I noticed that there where hundreds of studies about men and lower levels of testosterone with regards to overweight males and older males. This made me wonder if as a male ages and testosterone decreases that could be the reason why we do not see older males being diagnosed with Autism.

Now when I finally got to some very interesting studies about females and testosterone I found that overweight females also had elevated levels. This is in direct contrast to males. It made me wonder if that is the reason why the rates of adverse events reported to the Vaccine Adverse Event Reporting System (VAERS) change from predominately male in the youth to predominately female in later life. Here is the chart we used earlier that reflects that shift. 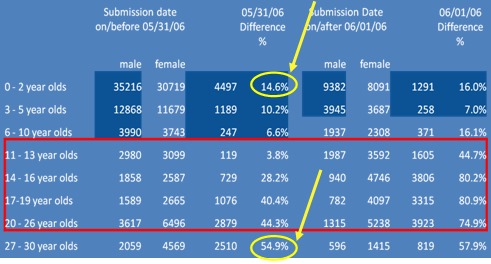 In an article in the American Journal of Epidemiology they had this to say about testosterone in overweight women. (1)

"Increasing weight was associated with increasing total testosterone concentration at every examination."

This is what I found on PubMed. (2) "Regional fat distribution (RFD) has been associated with metabolic derangements in populations with obesity. For example, upper body fat patterning is associated with higher levels of free testosterone (FT) ..."

In the Journal of Clinical Endocrinology and Metabolism (3) they studied children. These are their findings.

To finish this part of the article one of the complaints that I have heard once too often is that young girls are being diagnosed with PCOS (Polycystic Ovary Syndrome). (4) With PCOS some of the side effects are increased testosterone levels which cause facial hair, irregular periods, cramping, hair loss and other symptoms.

What absolutely amazes me is that no one is taking into consideration the changes that are occurring in the female anatomy during different stages in their lives. I mean, come on here, I am a lay person and I figured it out. What is wrong with the PhD scientists and all this vaccination hoopla they are promoting in August? Don't they get it?

The other thing they are not taking into consideration is the fact that glutathione peroxidase is decreased in overweight females. I reported on the effects of glutathione deficiency in my previous article (Part 6).

Here is a study that I found on that from International Journal of Endocrinology and Metabolism. (4)

"Glutathione peroxidase was significantly lower in the obese women than in the controls."

You are probably wondering where I am going with all this. Elevated levels of testosterone via the scientific evidence show that the effect on the anatomy from infant boys to adolescent girls has the potential to cause disease and harm by the introduction of toxins via vaccination and/or environmental factors.

In my next article, I will be addressing how in the third subset of girls affected by the HPV vaccines may have been injured because they received the vaccination during the premenstrual phase of their hormone cycle, when hormones levels are lower and the immune system is more compromised. My associate, Women's Health Educator Leslie Carol Botha has been researching how fluctuating hormones affect women's health and behaviors for the past 30 years. She has been greatly concerned that the timing of vaccination is crucial to the outcome. She has voiced her concern in an article that she and her co-author wrote for the National Vaccine Information Center in August of 2008, titled: Vaccinating Teens During the Premenstrual Phase May Increase Adverse Reactions.

It is my hope that you are finding this information as interesting as we did when we put it together for the FDA presentation.

The greater circulating levels of testosterone with obese women and smokers suggest that testosterone may be an important contribution to those disease conditions where obesity and smoking are risk factors, including cardiovascular disease.

Androgens before and after Weight Loss in Obese Children

Hyperinsulinemia also stimulates the ovaries to make more male hormones (testosterone and androstenedione) and lowers the liver's ability to clear these hormones from the blood. Higher blood levels of male hormones contribute to PCOS symptoms including acne, male-pattern hair growth (on face or body) or balding, and lack of ovulation.

* http://win.niddk.nih.gov/notes/summer04/winnotes_summer04.htm The full report, "Pathogenesis of polycystic ovary syndrome: What is the role of obesity?" appears in Metabolism (2004;53:358-376).