Cynthia A. Janak
Bachmann, HPV, and Perry - Thank you for bringing the HPV vaccines back into the spotlight

September 16, 2011
I want to thank Michele Bachmann for bringing up the fact that Governor Perry overstepped his authority with his mandate. I also want to thank Governor Perry for overstepping his authority. The reason being is that since February 6th, 2007 when I wrote my first article about this "The new king of Texas," I have had the opportunity to travel down a road of discovery and amazement. What I have learned in the years since then have shown me that there is just so much to learn about all types of things especially the human body and health. It has been an amazing journey with many realizations. So thank you Governor Perry from the bottom of my heart for this but you will definitely not get my vote nor will you ever.

I want to thank Merck for their disclosure policy with regards to who they give grants to. You will find the 1st Quarter 2011 Grants list here.

ABC and CNN mention several organizations in their statements. First let us look at the AAP (American Association of Pediatrics). In 2009 Merck announced in a news release this: "The American Academy of Pediatrics (AAP), with a grant from the Merck Childhood Asthma Network, Inc. (MCAN), today announced a new initiative that will allow pediatricians across the country to pilot a series of quality improvement programs to effectively address the top chronic disease affecting kids — childhood asthma."

I believe it is safe to assume that the American Association of Pediatrics has received more than this one grant. Could this be a conflict of interest as to their comments? ABC: "There is absolutely no scientific validity to this statement. Since the vaccine has been introduced, more than 35 million doses have been administered, and it has an excellent safety record."

I love how these experts come up with their numbers. It makes me laugh. Let me direct you to the real numbers by the CDC. "As of June 22, 2011, approximately 35 million doses of Gardasil® were distributed in the U.S" The report says DISTRIBUTED not ADMINISTERED. I wanted to add the emphasis here.

*Dr. William Schaffner: is a liaison member of the Advisory Committee of Immunization Practices (ACIP), a former member of the National Vaccine Advisory Committee (NVAC), and a member of the Physician Advisory Board of the Adult Immunization Initiative of the American College of Physicians. He is also a consultant in the public health policy and communicable disease control for numerous national and local institutions, including the Centers for Disease Control and Prevention, the World Health Organization, the Tennessee Department of Health, and the American College of Physicians, among others.

I just have to add vaccines biggest pro voice to this and that is Dr. Paul A. Offit.** He is associated with "The Children's Hospital of Philadelphia, American Board of Pediatrics, Professor of Pediatrics at the University of Pennsylvania, and One of his mentors at the Children's Hospital of Philadelpha was Maurice R. Hilleman, the greatest vaccine-maker of the 20th century." I was surprised that Offit did not come up and his affiliations did not receive that much this quarter. 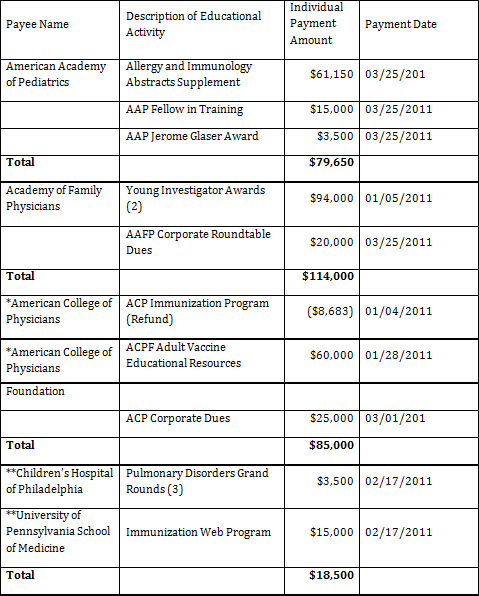 I want you to remember this is only for one quarter reporting. I am not going to go into all the others listed on the Merck site.

I do want to commend Merck on their openness and transparency with the reporting of these contributions. I realize that organizations and various institutions rely on donations for projects and other necessary functions. I just wish Merck felt the same about this vaccine. Too bad.

Back to the meat of the subject.

The professional organizations that were referenced by these articles did not disclose a possible conflict of interest. These organizations, no matter how small the donation, potentially could have reasons to why they would speak very highly of a specific vaccine type. It is just good business.

That is where I have the advantage because I do not belong to any of the organizations or trade unions, etc. that could have the ability to curtail what I write. I call it like I see it with the facts to back everything up.

All these professionals are saying that the Gardasil vaccine is safe. Well from what I have read and reported on in my article "Gardasil trials update — New Medical Conditions" proves to me that the vaccine does not appear to be that safe. What I did was read the entire FDA document titled "Clinical Review of Biologics License Application Supplement for Human Papillomavirus Quadrivalent (Types 6, 11, 16, 18) Vaccine, Recombinant (Gardasil®) to extend indication for prevention of vaginal and vulvar cancers related to HPV types 16 and 18. Dated September 11, 2008" I found the category of "New Medical Conditions" and reported it because I felt it was very important.

Going back to the ABC and CNN articles I have a question. What I want to know is how any intelligent person can say that 73.3% New Medical Conditions (pg. 137) in the participants that received the vaccination series means that it is safe? This just does not make logical sense at all.

Let me put it this way. If 1,000,000 children are vaccinated with Gardasil you have the very, real chance (3 out of 4–730,000 children) that your child might have a new medical condition of some sort some time after the vaccinations. This is real folks. I can't make this stuff up. When I first found this I almost fell off my chair in amazement. I just could not believe what I was reading.

I want to highlight just a few of the stats from this table. How do you like the odds? Do you feel lucky today? 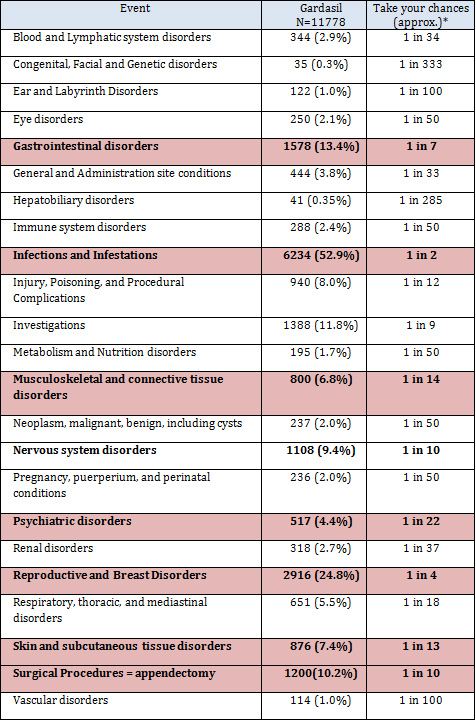 * I added this column to show you the odds with this vaccine with regards to the FDA report.

There is just one more thing I want to mention that has gotten a lot of news in regards to the comments that Ms. Bachmann said. That is the word retarded. Way back when that term was used when a person was mentally impaired. It was no real big deal at the time but with political correctness, etc. we no longer use it.

I want to quote from the ABC article. "She told me that her little daughter took that vaccine, that injection, and she suffered from mental retardation thereafter," Bachmann said. What I see here is that the mother used the term and Ms. Bachmann was repeating what she was told. It is obvious that this mother made an impact on Ms. Bachmann for her to use that term.

Now I want to let you know that the majority of the families and girls that I know have stated time and time again that they have brain fog. Could this woman's daughter be more severe? We may never know?

The main stream media is doing it again to another woman that is running for the highest position in the land. This gender discrimination needs to stop. Stick to the issues not a stupid word.

This is the big issue in the debate. Perry overstepped is executive authority to force an unproven new vaccine on the children of Texas. The Texas Legislature would not roll over for him and passed bills against Perry's order which he refused to sign so it all died. Then he back peddles and says if he were to do it over he would have done it the right way. Perry back peddles again and says that he rescinded the order. But he still says to this day that he believes in a vaccine where the effects to prevent cancer will not be truly known for 20 years. Good going Perry.

Interests: I am a board member of the Truth About Gardasil and have no other affiliations with any other group.