Alan Keyes
Learn from the enemy-and rescue the nation

August 12, 2013
"But when citizens have become bad, such an order becomes the worst, for only the powerful propose laws, not for the common freedom but for their own power; and for fear of them nobody can speak against them. So the people come to be either deceived or forced to decide its own ruin." (Machiavelli, "Discourses on Livy," Bk. 1.18.3)

"To those who are posted in a city as guard of its freedom one cannot give a more useful and necessary authority than that of being able to accuse citizens to the people, or to some magistrate or council, when they sin in anything against the free state." (Ibid. 1.7.1)

In the movie "Patton," one scene depicts the renowned World War II general contemplating the aftermath of a successful encounter between his American tank forces and those of German Field Marshal Erwin Rommel. "Rommel, you magnificent bastard," he is made to exclaim, "I read your book."

This scene shows Patton with the good sense to realize that it is better to learn from an ingenious enemy than to be defeated on account of ignorance bred by animosity. 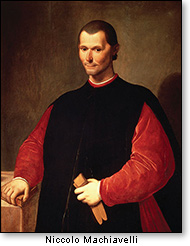 As John the Baptist preceded the light of Christ, so Niccolo Machiavelli came before the darkness of this adulterous age. He took it upon himself to make clear the ways and means with which mortal men could secure victory in the war against God that began in earnest with the advent of Jesus Christ. Ours is the age in which, on account of a momentary triumph of Machiavelli's iniquitous "philosophy," his well-earned reputation for wickedness has been made to seem irrelevant. But this is precisely in accordance with the tactical genius he exemplified, especially in his famous pamphlet of advice to those determined to follow the tracks of the Prince of Evil.

People who do so are either imitators or hunters. The first read the spoors (tracks) in order successfully to stalk and make sure of their prey; the second, in order to anticipate, well in advance, the stratagems of the first. I believe that, in this respect, there were among America's founders people who learned from Machiavelli. They were, like so many Pattons, princely themselves, but in the service of the Prince whose first vocation, as the husbandman of humanity, was successfully to stake his life for his wards, not to slake his own thirsty ambition with their life's blood.

Look carefully into the context of the words quoted at the beginning of this column, and you may recognize the features of the very crisis that is now overtaking the American people. The process by which we propose laws for the governance of our nation has been subverted by the corruption of citizens who exclusively "propose laws not for the common freedom but for their own power." Of the political parties that now dominate the American legislative process, Obama's party aims to ruin the republic. The GOP exists, in specious opposition, to engage, lull, and deceive those still loyal to America's Constitution of liberty. They will go on doing so until the time comes when, in unison with their putative "opponents," they can squat upon its ruins and announce, with mocking sorrow, that its vestiges are now too far gone to save.

In support of this conclusion, they will discover, as if for the first time, the loss of America's character (which they have incessantly worked to corrupt); the decline of its prosperity (which they have ruthlessly worked to destroy); and the irrelevance and decay of its constitutional provisions for government of, by, and for the people (which by every means possible they have neglected, undermined, denied, and disparaged at every turn).

The GOP's once closeted, but now ever more boldly flaunted collaboration with the open enemies of America's constitutional republic, exemplified by GOP senators like John McCain, Marco Rubio and Lindsey Graham, is an ominous sign that its destroyers think the time is near when they will be able to discard the mask of any constitutional charade. To hasten that day, they work to make sure that the American people are preoccupied with individual survival; that they are forced by perverted "laws" to obsess over a debased concept of human identity mainly determined by hedonistic, sensual appetite; that they are carefully educated in total ignorance of the underlying responsibility to God that entails the exercise of God-endowed rights by which, as a people, they can maintain their legitimate claim to self-government.

So now Americans are confronted with a number of self-destructive ultimatums, including:
All these proposals call on Americans, as Machiavelli says, to decide their own ruin. All are now advanced with the collusion of powerful controlling forces in both the supposedly adversarial political parties. 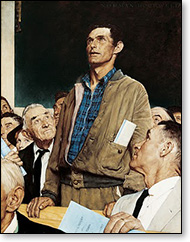 The "people" hold the "power of accusation"

Godfather style, the elitist faction thinks to make us an offer we can't refuse, that is fatal no matter which way we turn. But so far, they are still constrained to make the offer under the rubric of constitutional order that makes the voters of America the ultimate "guard of its freedom." The voters have the power to expose the real aim of their offer, which is the destruction of America's free state. That is the power of accusation, the impeachment power, entrusted to their representatives in the branch of the national legislature most frequently and immediately subject to change by the people at the grassroots.

Roused and unified in the determination to save their liberty, the people can thwart the collusion of the political parties, demand accountability from those who are destroying it, and remove them from the opportunity finally to achieve their aim.

But who among the American people at large is willing to read and understand lessons from the handbook of evil, lessons that shape and guide the fatal blows ruthless would-be tyrants are directing against their constitution of government? Are you? If so, let your yes be yes. Join the effort to revive the Constitution's modes and orders by skillfully employing the provision it makes so that people willing to exercise their God-endowed rights can rescue America's free state from its destroyers.