September 2, 2013
"[F]or treason is indeed ... not only offenses against the ... government, but also that accumulation of guilt which arises whenever a superior reposes a confidence in a subject or inferior ... [who] so abuses that confidence, so forgets the obligations of duty, subjection, and allegiance, as to destroy the life of any such his superior. ..." (Sir William Blackstone, Commentaries on the Laws of England, Chapter 6)

"The subjects of its jurisdiction are those offences which proceed from the misconduct of public men, or in other words, from the abuse or violation of some public trust. They are of a nature which may with peculiar propriety be denominated POLITICAL, as they relate chiefly to injuries done immediately to the society itself." (Hamilton, Federalist No. 65)

"... no previous statute is necessary to authorize an impeachment for any official misconduct; and the rules of proceeding, and the rules of evidence, as well as the principles of decision, have been uniformly regulated by the known doctrines of the common law, and parliamentary usage. In the few cases of impeachment, which have hitherto been tried, no one of the charges has rested upon any statutable misdemeanors." (Joseph Story, A Familiar Exposition of the Constitution of the United States, § 125)

It's obvious that support is intensifying for the impeachment and removal of the civil officers collaborating with the Obama faction's assault on the Constitution. Since I last wrote, the Obama faction and its collaborators have begun deploying the dismissive calumnies they use to cow and demoralize citizens roused to defeat the elitist faction's effort to overthrow constitutional self-government in the United States.

"[S]enior White House strategist David Axelrod...went on MSNBC to label impeachment talk absurd." Apparently, the Obama faction's propaganda cable network (MSNBC) has been assigned to act as the vanguard of the effort to smear impeachment talk as "fringe" and "foolhardy."

But a growing number of Americans are refusing to grovel at the insults of their would-be masters. These Americans mourn the wreckage of our economic strength. They take offense at the assault on our moral heritage and institutions. They angrily reject the wanton disregard for our natural and constitutional rights, along with the constitutional provisions that implement our sovereignty as a people. They lament dissipation of our good faith and credit as a nation, the ruin of our international stature, and the gradual decrepitude of our nuclear deterrent. Most especially, they resent seeing our military resources deliberately wasted, in ways that arm and strengthen the most active, deadly enemies of our nation, while callously expending the lives of our soldiers, intelligence operatives, and diplomats. They rightly conclude that the Obama faction and its collaborators are willfully destroying the life of the American people, the rightful sovereign to whose constitutional government all citizens of the United States owe true allegiance, especially when serving as civil officers in that government.

In one respect, however, there is a little truth in the Obama faction's propaganda, despite their slanderous, wicked intent. If talk and demonstrations are as far as it goes, talk of impeachment, even though accompanied by demonstrations of sincere, well-meaning passion, may prove to be less useful to the restoration of America's liberty than to its enemies. Effective political war is being made against the liberty and constitutional government of the American people. Beyond talk and demonstrations, the American people need an effective strategy to thwart that political warfare. They need to identify and deploy their politically strategic assets. They need to identify and break away from the treacherous forces assigned to deceive and mislead them. They need to depart from the sterile patterns of passivity and unmeaning partisanship that have brought our liberty to the brink of permanent destruction. 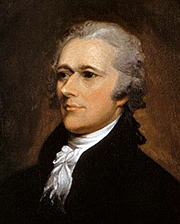 It's not enough to focus on impeachment as talk, or even as some kind of legal project. Discerning Americans need to focus on impeachment as a constitutional and political strategy, one that could restore the active, intelligent sovereignty of the American people, without destroying the civil peace of the United States. Comparing the U.S. president to the king of Great Britain at the time, Hamilton observed that "The person of the king of Great Britain is sacred and inviolable; there is no constitutional tribunal to which he is amenable; no punishment to which he can be subjected without involving the crisis of a national revolution." Today, we can see in places like Egypt the dreadful consequences of such a deficiency.

The U.S. Constitution allows citizens, acting through their legislative representatives, to remove even the highest officers of the U.S. government, by political means and without violence. Nowadays, the threat to the Constitution is palpably severe. The potent combination of elections and impeachment offers the people of the United States the means to deal with it. They can withdraw their confidence from civil officers who have betrayed and are betraying them. They can do so before their treacherous schemes ripen to the point of violent tyranny.

The superficial pundits of our day miss the political connection Alexander Hamilton shrewdly understood. They talk as if impeachment and removal depend on making humble supplication to some of the very people whose political and other fortunes are tied to the success of the offenses that warrant removal. But the biennial elections in 2014 will affect the composition of the next U.S. Congress (both House and Senate). With impeachment and removal as the battle cry of grassroots mobilization in those elections, the people can exercise their sovereign power to order rather than supplicate. But they can only do so if they:
Will you consider becoming part of the growing movement to translate impeachment talk into effective political action? Do you agree that Americans need a vote of no-confidence in Obama and all those (of any party) who are collaborating in his faction's attack on constitutional government and liberty in the United States? If so, read the call to action here and here. Then let your yes be yes, for the perpetuation of liberty and the U.S. Constitution.