May 27, 2014
The Franciscan Sisters of Little Falls were visited by the Council on American-Islamic Relations, aka CAIR, an arm of the Muslim Brotherhood (MB). These trained public relations groups reach out to the underinformed, accommodating citizens, in political and religious institutions, public libraries, schools and universities, and government security forces, to whitewash their history, hide their intent, inhibit discussion, prohibit news coverage of acts of violence, and control language that exposes the truths of Islam. 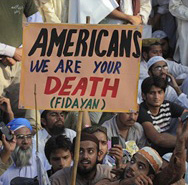 CAIR and ISNA (Islamic Society of North America) were unindicted co-conspirators of the Holy Land Foundation, a front organization for Hamas, a designated, chartered terrorist group. They are no different than the Muslims who are killing Christians and Jews throughout the world; the same as Boko Haram that kidnapped, converted and killed the female students in Nigeria; the same as those who burned to death male students just weeks before; and the same as those who recently destroyed entire villages in Nigeria, burned down 200 homes and butchered 16 while intoning Allahu Akbar. They differ only in their attire.

Among the many strategies of Islamic conquest is to use a grassroots network of social and charitable organizations to expand their membership base. Their God demands conversion or death to infidels and Islam is responsible for the slaughter of 270 million people over 14 centuries – with more than 23,000 deadly jihad attacks since 9/11/01. Eighty percent of their Koran incites and advocates death.

Their claim of victimization is bogus; they are the aggressors in today's world. They do not live the Gospel of tolerance and peace, or the Biblical Commandments or Golden Rule. Rather, they advocate the cruelest set of laws, Sharia, on the planet. Behind a façade of Mohammad's earlier writings and their five pillars of faith, the later writings in their Koran, Hadith, and Sura contain a doctrine of hate and commands to kill Jews and Christians primarily, but also Hindus, Buddhists, all infidels and apostates. Sexual slavery continues in Islam. This is a political ideology couched as religion, to globalize Islam. They have made continents unsafe; Jews are fleeing for their lives and Christians who have nowhere to run are beginning to experience the crimes of Islam – riots, no-go zones, rapes, terrorism, honor killings, and a loss of their native identity.

I ask the Franciscan sisters to please research this themselves and perhaps obtain the documentary, "Honor Diaries," for how women are severely mistreated in Islam. I also urge them and all their coreligionists to go to www.memritv.org and download a cross-section of weekly sermons translated into English, for an analysis of political, ideological, intellectual, social, cultural and religious trends in the Middle East. Books by Nonie Darwish or Brigitte Gabriel or Ayaan Hirsi Alli would also provide a truthful exposé of Islam.
I hope the Sisters will contact me or ACT! for America for more information about this scourge that has insinuated itself into our public schools, our places of worship, businesses, and government. We must all become aware of how we might be instrumental in protecting ourselves, and our country.