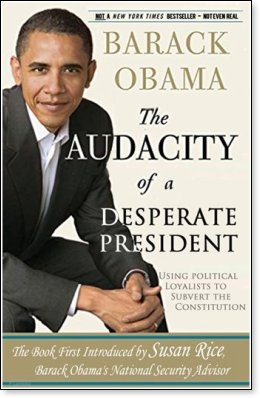 Now that all the talk about Russian collusion, quid pro quo, and believing all women seems to be fading away along with Hillary Clinton’s presidential ambitions, the country is beginning to focus on other issues and new catchphrases.

Rice wrote that Obama opened the meeting by declaring his commitment that our intelligence and law enforcement communities continue handling everything “by the book.” He went on to emphasize that he, himself, was “not asking about, initiating, or instructing anything from a law enforcement perspective,” but repeated that his law enforcement team needed to proceed as it normally would…by the book.

But the strange circumstances and awkward verbiage in the email suggest there is more to the story. An anonymous and unreliable source filled in a few details.

According to the source, when those opening statements were made, Comey had been busy fussing over Obama’s rumpled collar, and only heard bits and pieces of the introduction. It was when he heard the words law enforcement together with “by the book,” that he excitedly chimed in, almost shouting those three now familiar words. It was later revealed that what he actually said was “Yes, buy the book!” It turns out, he was shamelessly plugging a personal project he’d been working on. The source couldn’t say if any of those present ever bought a copy of A Higher Loyalty.

Interestingly, that same anonymous source indicated that Joe Biden was more involved than previously reported. Though he had been quietly muttering to himself during most of the meeting, at one point, he exploded, “This ‘by the book’ stuff is all a bunch of malarkey! Let’s just take ‘em behind the woodshed!”

It’s obvious why Rice didn’t include those details. But it doesn’t matter what she wrote.

Today, everyone on the left, including the media, believe that Rice’s email proves conclusively that everything was on the up and up. They had to discard their absurd and now-inconvenient mantra about believing all women, considering that Tara Reade issue…now they just believe all Democrats.

Others, though, see something peculiar, perhaps even sinister, with the contrived patter and all the self-righteous talk about doing everything on the straight and narrow. They see someone trying a bit too hard to appear innocent. They see a clever scheme by a band of conspirators trying to protect themselves from a storm they knew was brewing.

But our anonymous informant tells us everyone is wrong. It seems that Barack Obama and Susan Rice weren’t using a metaphor at all when they talked about going by the book. They weren’t using a figure of speech, but had a real book in mind to use as a manual. We don’t know what that book might be, but Rice said in her email three times that they were going by it, so it must have been important.

Here are some possible candidates:

1. If They Come for Us, by Fatimah Asghar

While the title offers an intriguing hint of Team Obama’s concerns, it turns out that this is a book of poetry. So as more details of their plot to destroy a president boomerangs on them, it does look a lot like poetic justice, which is probably better than no justice at all. Still, a book of poems is probably not what Rice was referring to.

2. How to Start Your Own Country by Erwin S. Strauss

Deeply resentful of Donald Trump’s victory, it’s clear that they wanted to leave all options on the table – including removing Trump from office, and as the title suggests, starting from scratch. This is a good possibility.

3. Everything I Want to Do is Illegal by Joel Salatin

This one has real possibilities, given the FBI’s favorable treatment of Hillary Clinton and the underhanded, overzealous, and unethical tactics used to ensnare and entrap Michael Flynn and other Trump associates – all clearly with Obama’s approval. Maybe this is the book they were going by.

But there’s one other, much more likely contender. When they said they wanted to go by the book, it’s very likely they were talking about a book not yet written – the much-anticipated sequel to Obama’s best-selling The Audacity of Hope. The working title of this new masterpiece is rumored to be, appropriately, The Audacity of a Desperate President, and it will tell us everything we need to know.