Frank Maguire
There's got to be a mourning after

May 22, 2010
"As political philosophy derives its sanction from ethics, and ethics from the truth...it is only by returning to the eternal source of truth that we can hope for any social organization which will not, to its ultimate destruction, ignore some essential aspect of reality. The term 'democracy,' as I have said again and again, does not contain enough positive content to stand alone against the forces you dislike  it can easily be transformed by them." Thomas Stearns (T.S.) Eliot, 1939.

This article was written a couple of years ago, but the realities I wrote about then are even more relevant today. The war, then, had only just begun, as far as the average citizen knew, having been deliberately unapprised of the advancing flood.

When a culture begins to behave as if schizophrenic thinking is reality, that culture should be defined as living in a fantasy. Any attempt to find rational answers to the irrationality of our immigration policy (policies!) is virtually futile...unless one can decode what is really going on.

Though much going on is sub rosa, writer Jerome Corsi  John Kerry's Nemesis  has filed a Freedom of Information Act (FOIA) request to force the Bush Administration to divulge all of its documents dealing with the Security and Prosperity Partnership (SPP) scheme involving the United States, Canada, and Mexico. 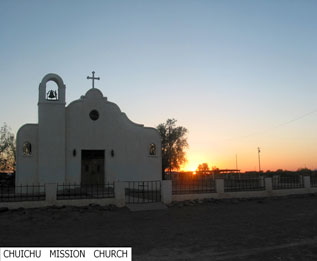 My Hispanic wife Helen and I had moved from Fairview, OR to Arizona City, a small, unincorporated community in Pinal County Arizona. Adjacent to us is the second largest Indian reservation in the United States: The Tohono O'odham Nation (The People of the Desert). These approximately 20,000 people, allegedly descendants of the ancient Hohokam, live in 11 districts that reach from Phoenix beyond the Mexican border. Anecdote has it that the Spaniards had called them the Bean People  Papago. Every day one can observe dozens of Border Patrol vehicles  based in Casa Grandé  driving south through the reservation, down through Sells, the Nation's "capital" city. They, then, spread out to patrol the border.

Recently my wife Helen (who is part Yaqui Indian) and I drove down to the tiny border community of San Miguel. We were about one-half mile from the border when we were stopped by a Border Patrol officer. His first question was, "Do you know where you are?' I answered "Yes!" His second question was "What are you doing down here?"

I explained that I am a writer, whereupon he slapped his hand over his name tag, with a grin. We both chuckled as I said, "too late Agent ______." I continued "...and I'm interested in observing what is happening along the border." The agent, who was very polite, explained that I had driven past a remote border patrol observation camera which prompted him to check us out. He asked if my wife is a member of the Tohono Nation, and she responded that she isn't. He said that were she Tohono, we would be free to drive within the reservation. Otherwise, he said, we need the Nation's permission to meander.

We chatted, amicably. He glanced at his watch and said, "If you want to see something, just stick around for a couple of hours. That's when our shift changes, and that's when they start coming through." I asked "Who are 'they?'" He answered, "The drug-runners."

He explained that the drug transporters try to run the Border Patrol gauntlet in multiple vehicles. The Agent explained that many are nabbed but many also get through. The officer did caution me to not pick up any hitchhikers because if they are illegals, and caught in my vehicle, it is not a happy situation for me. I might be charged with aiding and abetting. A real hassle, he advised. (I smiled to myself at this one, thinking "How much aiding and abetting is being done by the government?")

The Agent told me that if I proceeded, I would soon come to a fence; "Don't go beyond that!" he said. I said not to worry  that I was turning around immediately. He counseled that it was a wise choice. It is dangerous. Not because of the illegal immigrants, but because of the drug runners who work for cartels that have, like the Cosa Nostra/Mafia, taken over some American cities.

The B.P. Supervisor then made a comment that any person with the slightest understanding as to how criminal organizations work...how any criminal minded individual works, should comprehend. He said, "These 'sanctuary city' people don't care for the poor folks shoved over here by their own government. With them, it's all about cheap labor and votes. The first victims of the cartel thugs, the totally vulnerable, are the illegal workers and their families. The gangsters threaten, demanding that the defenseless do what is commanded or they'll reveal them. Or, as often happens, kill them!"

In his important book published by WND Books, In Mortal Danger: The Battle for America's Borders and Security, Rep. Tom Tancredo (R-Colo) wrote:

"The Tijuana-based Felix drug cartel and the Juarez-based Fuentes cartel began buying legitimate businesses in small towns in Los Angeles County in the early 1990s. They purchased restaurants, used-car lots, auto-body shops and other small businesses. One of their purposes was to use these businesses for money-laundering operations. Once established in their community, these cartel-financed business owners ran for city council and other local offices. Over time, they were able to buy votes and influence in an effort to take over the management of the town. They wanted to create a comfort zone from which they could operate without interference from local law enforcement."

Two days after our junket to the border, an article in the Arizona Daily Star was headlined "Border Agents Take Gunfire." In Nogales, AZ, a silver Mercedes SUV ran the border and the vehicle's passengers opened fire upon the Border Patrol, who returned fire. The suspects exited the vehicle and scattered. The Nogales police apprehended one of the assailants, plus hundreds of pounds of marijuana.

Many questions have been on my mind, and I intend to gain Tohono permission to do some investigative journalism. Hopefully, I will get some assistance from the Nation police and from the Border Patrol. First, I want to determine if our border security is primarily about drugs, and only incidentally about illegal aliens. Second, I want to know how the drug-runners are dealt with by the law when they are apprehended.

Most importantly, however, I want to discover for myself how all of this plays into the Security and Prosperity Partnership of North America (SPP), tri-national alliance among the U.S., Mexico, and Canada scheme devised by the Bush Administration in 2005 (www.spp.gov). And, how this fits with the economics of Third Way/Public-Private Corporatism, which is the evolved euphemistic variation of Mussolini's Fascism and Hitler's NAZI-ism.

In one of a series of articles written by Robert Locke, for Front Page Magazine  What Is American Corporatism  Locke explains why this so-called "Third Way" appeals strongly to the bureaucratic mind of government and the managerial mind of big business, and the increasing globalism of our Executive, Legislative, and Judicial branches. Locke writes:

"Corporatism blends socialism and capitalism not by giving each control of different parts of the economy, but by combining socialism's promise of a government-guaranteed flow of material goods with capitalism's private ownership and management.

What makes corporatism so politically irresistible is that it is attractive not just to the mass electorate, but to the economic elite as well. Big business, whatever its casuists at the Wall Street Journal editorial page may pretend, likes big government, except when big government gets greedy and tries to renegotiate the division of spoils. Although big business was an historic adversary of the introduction of the corporatist state, it eventually found common ground with it. The first thing big business has in common with big government is managerialism. The technocratic manager, who deals in impersonal mass aggregates, organizes through bureaucracy, and rules through expertise without assuming personal responsibility, is common to both. The second thing big business likes about big government is that it has a competitive advantage over small business in doing business with it and negotiating favors.

Big government, in turn, likes big business because it is manageable; it does what it is told. It is much easier to impose affirmative action or racial sensitivity training on AT&T than on 50,000 corner stores. This is why big business has become a key enforcer of political correctness. The final thing big business likes about big government is that, unlike small government, it is powerful enough to socialize costs in exchange for a share of the profits."

There always is, when "progress" is a product of egregious error, including that "error" knows as greed, a Mourning After.