Frank Maguire
"I intend to tell the truth, but what happens to me if I don't?"

May 26, 2010
The following article was written in response to a question from one of my colleagues regarding concern that Keith Ellison, D-Minn., the first Muslim elected to the United States Congress would not take his oath of office on the Bible, but on the holy book of Islam, the Koran. (By the way, were I sardonic, I would point out that Muhammad gave permission for the faithful to lie three times if lying to protect the faith.) My thoughts, here, are simply thoughts. Not Dogma!

This is an old story, and I have thought about it since the issue came up and Ellison was sworn in. Also, it is an extremely complex story and one which to write about in depth would require much time and space.

I will say this, at this point: All nations are G-d's in that he is Sovereign over all of His creation. But there is only one "nation" that is, Scripturally, G-d's land: Israel! Zion!

The United States isn't a Christian nation, unless we merely mean that some of our founders were probably Christian, or at least made references to the Scripture, and some were not. Regardless of what the individual leaders of early America said, we have no way of knowing whether or not they were Christians. We don't even know whether those today who refer to themselves as Christian are Christians. Only G-d knows the heart; it is in the "heart" where the spirit of G-d resides. Even Satan can quote Scripture, as we know.

If America was anything at the outset, it was a religious nation, founded by those who were, ironically, fleeing religion. These were the dissenters  the pilgrims...the Puritans. These families came from England, etc., often by way of Holland which was tolerant of dissenters (much as it is tolerant of just about everything today). They came to a nation where there were the indigenes (the alleged to be indigenous people we refer to as Indians, who really were not native to the land, but came from elsewhere over a long period of years).

Almost immediately those who escaped religious persecution established a religion. They set-up a "church" they called Congregational, and they declared it to be, at least in Massachusetts, the official State church. All citizens were taxed to support it. Those who did not assent were regarded as virtual infidels. Catholics were forbidden everywhere until John Carroll welcomed the Catholics to Maryland.

So, this was the type of religious beginning upon which America grew.

Many in America still insist on calling our political system "democratic," even though the writers of our original documents despised the notion of democracy, calling it, as did the Greeks, "the rule of the mob...ochlokratia." The word democracy is not found in any of our founding documents. America was established as a Republic  which certainly did not assure that America would last forever. Rome, after all, was a Republic. But the founders  most of them  thought that a non-pagan Republic might have a chance, especially built upon what western civilization appeared to accept as the Word of G-d...the Bible.

But very early in America's beginnings, we found that the ideal religious/political combination has glitches. Not only had we established an exclusive State church, we also welcomed the influence of humanism, a new faith in science and reason as the ultimate informer of men, and the egalitarianism that came from persons like Voltaire and Thomas Paine. Here, then, evolved the theosophists, the transcendentalists, and the unitarians, (and now we have the New Christianity panentheists). These "free thinkers" dissent from the "dissenters," and America's capstone is found to have been engineered more by hopeful idealism than by the reality of G-d's Word. Democratism has, in the governance of modern America, superseded the Biblically grounded America ideally hoped for by the Founders. And America's citizens now watch our nation "progress," as does a receding tide progress to somewhere, away from G-d.

So, allow me to offer that America was a "type of religious" place, but there is no way to assert with any certainty that America was Christian. And absolutely it should not be declared to be, as some declare it, the New Jerusalem. Further, I suggest that a case can be made that there is no such thing as a Christian nation, a Christian Church (other than the geographically dispersed, spiritually united Body of Christ), or a Christian school. Why? Because Man-created institutions are not often created by G-d's command or permission! And as the political constructs of men have short shelf-lives, so it is with their religious innovations.

So, what appears to be going wrong in America is merely our increasing awareness that the American political system is not as eternal as we have been led to believe. This awareness has come to our attention quite dramatically in recent years. That which provided a type of moral consensus in the so-called United States has, for many reasons, begun to rapidly unravel.

The cultural changes that began around the 1950's brought what we call the New Age  the Age of Aquarius. Polytheistic, pantheistic, animist, atheistic and occult-mystic theosophies have been syncretistically intermingled with Scriptural, orthodox Christianity. The threat was not so much that there were cultic, neo-pagan out-croppings  our Constitutional First Amendment protects all religious freedom  it is that in our spiritual complacency, we tolerated the religious equivalency that is now, Pandora-like, loose in the land. While orthodox, Scriptural Christianity is increasingly beleaguered by plebiscitary democracy and krytocratic (judges) fiats.

Now, in America, every religion is regarded as equal to Jesus Christ, thus effectively denying all that Jesus spoke  making Jesus irrelevant. It is obvious that our political leaders  the panderers to pluralism and religious-equivalency  no longer have any basis for refusing to surrender to what they choose to call "moderate" Islam, or to any other unhappy claimant who inanely, and founded upon their own prejudice, accuses Christians of "prejudice." 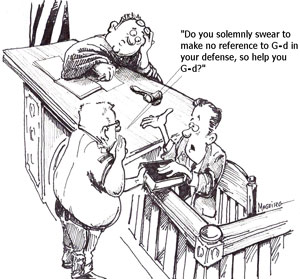 All written so far is a prelude to the point of this article: the Scriptural admonition that we are to "make no oaths." Especially, we are not to call on G-d to be our witness, to become, if we do not tell the whole truth, a virtual accomplice in our lying. We are, as Jesus told us, to simply let our "yes be yes, and our no be no." This is a reiteration of the commandment which tells us to "Bear no false witness." Even if one gets away with what we call perjury, not paying the legal price for not keeping the promise "Do you swear to tell the truth, the whole truth, and nothing but the truth, so help you G-d?" the liar does not escape G-d's justice.

Biblically grounded Christians  those who accept the value of G-d's Word from the lips of Jesus  know that all crimes are essentially spiritual transgressions...committed first against G-d. But who, today, will not lie under oath to keep from being punished, or to contribute to the pain and punishment of another person innocent of wrongdoing? So, in place of the fear of G-d, the State has been forced to create the crime of perjury. Beyond this, were a Christian to refuse to take a sworn oath, citing the doing so to be antithetical to G-d's Word, he or she might be held in contempt. It could, I suppose, depend upon the mood of the judge.

On the question of swearing an oath on the Koran? (I must say that I don't know how this works under sharia law.) Pretend, for a moment, that you live in, e.g., Wahhabi Saudi Arabia and you go to trial for some charge brought against you. Suppose, then, that the law requires that you take an oath on the Koran? What would you do? You would get nowhere demanding a Bible upon which to take the oath? Well, you might get somewhere  you might get to the block and beheaded.

You might try quoting the words of Jesus that you should take no oaths, but to let your yes be yes, and your no be no...to tell the truth, the whole truth, and nothing but the truth. This might avail more since even Mohammed taught that Jesus was to be revered as a prophet of Allah, albeit a minor prophet, vis a vis "The Seal of the Prophets," Muhammad.

Really, it is the disheartening to see the political leaders and the social-gospel clergy in the United States making a utility of Judaeo-Christianity while, simultaneously, behaving as if religious-equivalency and the democratic ideal of égalité and reconciliation are acceptable as Scriptural. But, isn't it too late for the nation to disallow Muslims or any other believer of some religion, regardless of how incredible it might be, to "swear" on whatever they aver has a claim upon their conscience? This, reader, is a question.

Sad, but true, and we must face it. What was a nation built upon Judaeo-Christianity is, now, a nation where Christ is considered by the "enlightened" to be no more than a name among Voltarian (Voltaire, French philosopher and rationalist-humanist who influenced many of America's early philosophers) "names (that are) famous."

Were I asked to swear under oath in a courtroom, would I now answer "I am not permitted to swear upon the Bible, for if I am to take that Bible to be the truth, it tells me to swear no oath, and let my yes be yes, and my no be no. I as a Christian tell you this, your honor, that I will tell the whole truth." Yes, I would. There would be those who would call me a fundamentalist freak...one to be placed upon the Janet Napolitano profile of "potential terrorists," to be closely monitored. Oh well, at the nominally Christian college I attended I was reviled as a fundamentalist. Imagine that? To actually believe in a foundation!