Frank Maguire
Does the fear of punishment deter?

Numbers 35:31 "Do not accept a ransom for the life of a murderer, who deserves to die. He must surely be put to death."

Matthew 19:18 "Jesus replied, ''Do not murder, do not commit adultery, do not steal, do not give false testimony...."

"The Black Hand (by Chris Blatchford) is a fascinating, vivid, and unforgettable insider's book at the bloody, secret, and deadly Mexican Mafia. Chris Blatchford's compulsively readable wake-up call spares no one and names everyone, including the politicians who aid and abet this dangerous criminal organization, through corruption, maddening naiveté, or political correctness." Joseph Wambaugh

The premise of the Religious Left (RL) is that the Christian Right (CR) fails the Christian test because it does not absolutely include opposition to war and capital punishment in its opposition to abortion and the acceptance and legitimization of homosexual acts. 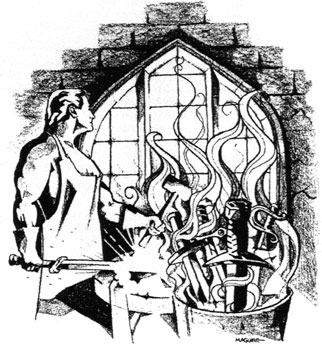 I maintain in this article that the "seamless garment" contentions of the RL in their cynical assault on the CR shows that the Left is "religious," for they have created their own secular/political religion, but they are not scripturally Christian in the historical orthodoxy of Christianity.

It is unnecessary for me to cite the most notorious horrors committed by persons who choose to commit evil acts, e.g., Ted Bundy; Albert "the Boston Strangler" Desalvo (murdered by an inmate while at Walpole State Prison, MA, 11-26-73); Jeffrey "Cannibal" Dahmer; Charles Manson; Gary "Green River Killer" Ridgway, who murdered 48 women between 1982-1998

Only a couple of years ago we read of the Cheshire (Connecticut) murderers, John Komisarjevsky and Steven Hayes, who were arraigned for burglary, kidnapping, rape, aggravated assault and triple homicide (they bludgeoned, strangled, asphyxiated, and cremated three female members of a family). We also read of the evil execution-style murders in "sanctuary city" Newark, N.J. http://www.foxnews.com

Deterrence is defined as "the act of deterring, impeding, hindering (especially by means of threats or fear)." Deter is not a precise equivalent of "prevent." Deter means to discourage someone from taking action, prevent means  in addition to deterrence  to stop someone from acting. If you see someone menacing with a weapon and you shoot and kill him/her, you have certainly stopped them. You could only say that you had permanently "discouraged" the weapon wielder if you have a sardonic sense of humor. There is an irony here. In the above hypothetical, killing was not prevented. Someone was killed. It is universally accepted that when he/she who kills or threatens imminent death to another is prevented, by the forceful intervention of a defender  including the sanctioned State  with the result being that the aggressor intending bodily harm to the innocent person is prevented in the commission by being killed himself/herself, then Justice has been accomplished.

In the cause of Justice, scripture defines the defenses for the individual and for the government against those who would commit evil acts. Deterrence, Scripture counsels, requires assurance of swift and sure punishment, that the actions of evil-minded lawbreakers might be deterred or even, at best, prevented. The other defense, directed in scripture, is retribution, which commands suitable punishment, it being the necessary consequence of an evil act, determined by the gravity of the wrong done.

Does it deter a burglar when you lock the doors and windows of your home, and even install a burglar alarm? Does locking one's car impede a thief, or at least make his job more difficult? Certainly! But, depending upon the determination of the evil-doer, the locks might not prevent. Does police presence in a neighborhood deter crime? Is a woman jogging in a secluded area with her formidable dog less vulnerable to rape than if she did not have the dog?

How does one prove that fear of discovery, imprisonment, and punishment does not deter? Is there any way of knowing the number of persons who consider committing a crime, including murder, if they never turn their thoughts into action? It can't be done. When is the last time you heard the media report that someone had walked into a police station and thanked the desk sergeant for the very severe punishment for crimes such as murder and rape  that he/she had considered committing such a crime but after thinking about the consequences changed his/her mind?

One must draw reasonable assumptions. In the case of Ted Bundy, the narcissist/sociopath serial killer, had Bundy been caught after his first vicious murder of a young woman and after conviction had been executed, would not his execution have prevented the subsequent slaughter of innocent women? But, because fear of discovery and punishment did not deter/prevent Bundy, then that left to a society for the protection of the citizenry is retributive justice, performed not as vengeance (Romans 12:19-21 "Vengeance is mine, I will repay, says the Lord.") but as due justice, scripturally validated.

A graphic documentary from the History Channel Gangs in Prison: the Aryan Brotherhood gives irrefutable evidence that violent convicts, including unrepentant murderers, are responsible for the murders of other inmates and prison personnel. What is less obvious to those who do not pay sufficient attention, is that by the failed monitoring of the use of telephones by those incarcerated, convicts contract for the murder of those against whom they desire revenge  e.g., those whose testimony convicted them. This failure is admitted to by prison officials who claim that they have insufficient manpower. One notorious gang-member was found to spend about six hours a day "doing business" on the prison phones.

Also, street gangs, including active drug organizations, are actually run by groups like the Aryan Brotherhood, and the Mexican "El Eme," The Black Hand (I strongly recommend this book by author Chris Blatchford) from inside the prison.. The actuality is that gang and drug associated murders are a result of having been directed by inmates. How does the RL propose such crimes and murders be deterred or prevented? Is incarceration in the worldview of the RL considered cruel and unusual punishment? (Read John Stuart Mill's Speech on Capital Punishment.)

An obvious flaw in the reasoning of the RL is their non-demonstrable and un-provable contention that the threat of capital punishment has no preventive or deterrent value; this same illogic can be applied in opposition to all discipline and punishment. Such is the reasoning of anarchists and amoral-nihilists  proponents of the "society makes them do it" myth of the noble savage.

Unless there is swift and certain discipline against those who are positioned to continue to murder or have murder done, including the use of capital punishment, then Justice is an empty concept and innocent human life is devalued.

"The Humanitarian Theory of Punishment," God in the Dock, C.S. Lewis http:// kzoo.edu/petersen/teaching/lewis.html