November 1, 2010
First, we have to ask "What attracts persons to the homoerotic life style?" There is no single answer, though there are fundamental reasons in association. What Dr. Jeffrey Satinover calls a "cluster of influences." [1]

Even "attracted to" raises myriad questions. "Attracted to" implies choice. There are, however, some homoerotics — a diminishing number — who claim biological determination. "I was born that way," one hears. "I never remember being anything else," they say. 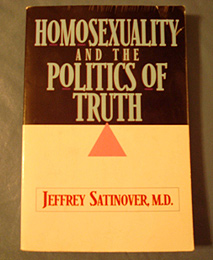 First, there is no evidence that has stood up to meticulous peer review pointing to a genetic etiology, though there are genetic implications as to what personality is more susceptible to ending up amongst the homoerotic culture. For example, some boys might be more "effeminate," and some girls more "masculine." But this, according to many psychologists, is only incidental and not causative. Dr. Jeffrey Satinover writes in the Homosexuality and the Politics of Truth, (Baker Books, Grand Rapids, MI 1996) that that which is normal is a wide spectrum that ranges from less macho males to tom-boy females. All is normal, he writes, and is not directly associated with homoerotic behavior. [2]

Secondly, the fact that one "remembers" never being anything else only proves that one has limited memory. For example, I could say "I've always walked upon two legs because I have no memory of crawling." Certainly I have not always walked. I just don't remember when I didn't.

The great majority of the homoerotic declare that their life-style is a choice. But even this raises problems having to do with the word "choice." The March 6, 2008 APA's (American Psychological Association) New Pamphlet on Homosexuality contains some interesting information and their recent position re. the "Biological Argument" is curious, considering the politics of homosexuality.

A. Dean Byrd, Ph. D., MBA, MPH, has written on the APA's 1998 brochure and the contrasting 2008 revision (see footnotes). Byrd writes in re the 1998 brochure, "This particular document was ostensibly published to provide definitive answers about homosexuality. However, few of the assertions made in the brochure could find any basis in psychological science. Clearly a document anchored more in activism than in empiricism, the brochure was simply a demonstration of how far APA had strayed from science, and how much it had capitulated to activism."

On the 2008 brochure, Byrd writes, "Though both brochures have strong activist overtones (both were created with editorial assistance from the APA Committee on Lesbian, Gay and Bisexual Concerns), the newer document is more reflective of science and more consistent with the ethicality of psychological care."

Under the sub-head "Some Say Truth Doesn't Matter," Byrd makes it quite plain that at least some in the APA are obviously still very much in league with the political strategy of "Gay" activists. He cites a statement made by a prominent member of the APA, published by the Harvard University Press, "...it may be that for now, the safest way to advocate for lesbian/gay/bisexual rights is to keep propagating a deterministic model: sexual minorities are born that way and can never be otherwise. If this is an easier rout to acceptance (which in fact may be the case), is it really so bad that it is inaccurate?" [3]

So much for the present state of scientific evidence for genetic homosexuality!

I cite an example of choosing that is a bit far afield, but I think it makes a good point. Imagine that you choose to visit a car dealership to look at the new models available. You encounter a very skilled salesman who "convinces" you to buy a car, on the spot, and you follow him to his office where you sign a contract. You feel good driving away in a shiny new vehicle. But the morning after, you look at the reality of a 5 year contract with $350 a month payment.

But suppose you had no intention of buying a car — we won't get into the realm of theoretical, genetic predisposition, not to mention free-will vis a vis mechanistic determinism. Suppose you were simply compelled to buy a car, it having been genetically predetermined. Who made the choice? You? The salesman? Neither of you? Was there even any choice?

Back in 1959, I attended a conference on the topic of growing plague of pornography. We discussed the damaging effects of the predicted porn pandemic. After listening awhile I commented that pornography is, unquestionably, an evil, and that young persons are susceptible as pornography proliferates. But I offered that pornography, in and of itself, was not the essential danger but is a co-factor. I suggested that pornography works synergistically with other cultural factors: the decline of personal religious faith; and the introduction of a philosophy that promotes promiscuous sexuality. I called it the Playboy philosophy. They did agree, but an almost helplessness descended upon them.

What happens to choice when a culture seduces persons into certain behaviors. What happens when biological disposition and cultural determinism ally?

I have spent 40 years studying sexual behavior — beginning with my own. I have watched as a culture which placed great value on virtue degenerated into a culture that actively advocates and promotes sexual licentiousness. One in which virtue is actually scoffed-at! One that has gone from avoiding the occasion to sin and self-destruction to one that says there is no such thing as sin, and there is only self-actualization, to use the phrase of the psycho-sociologists, sexperts, and pseudo-scientific accomodationists.

Focusing on the culture of the homoerotic, I spent time studying the pathogenesis that is now called "gay."

I found, in talking to many in the homoerotic culture, that most told the same story. They were seduced into it. Their first sexual encounter, often rape and molestation, was same-sex. Then it was repeated. Then it became habitual. Then, some would say, it became them.

Others told me stories of parental disaffection. Their father was often absent or physically and emotionally distant. Their mother was immoral, or, often, suffocating. They told me of false-guilt, of self- hatred. They told me of rejection, and a feeling that they were disliked by their parents. [4]

How did these youthful hurts and confusions manifest themselves. Some persons escaped into sexual fantasy and auto-eroticism — a virtual narcissistic inversion. Some became masochistic, believing that their not being liked by even their own parents meant that there must be something seriously wrong with them. Some did not blame themselves, but blamed others for mistreating them. This grew into sadism — hatefully and violently punishing others through representative surrogates.

None of this is new. The sexually obsessed culture we live in is not new. What is new is that the moral consensus that predominated in America has disintegrated. The neo-pagans have by their hedonistic philosophies wrought havoc upon this nation. How?

Going back to Playboy's pansexual philosophy, we have seen the destruction of heterosexual virtue — fornication and adultery becoming tolerated, then becoming acceptable, then proselytized as normal and not unhealthy. The flood gates were opened. Promiscuous heterosexuals, with an attitude that sex is paramount, came to the conclusion that their denying anyone of equivalent "rights" made them uncomfortable. In their denial of guilt they needed life-style affirming company. And that was to be found in the sub-cultures of paraphiliacs.

I ask you this: How can this be called "choice." Obsessive-compulsive choice? Culturally indoctrinated choice? Something is wrong here.


[1]  Dr. Jeffrey Burke Satinover, psychiatrist, is a former Fellow in Psychiatry and Child Psychiatry at Yale University and past president of the C. J. Jung Foundation. He holds degrees from M.I.T., the University of Texas, and Harvard University.
[2]  "Put simply, the hormonal environment in which a baby develops is a balance of androgenic (male) and estrogenic (female) hormones. A genetically male baby signals the mother to generate a more heavily androgenic environment than does a female baby. The particular hormone balance then determines whether a baby will develop typically male or typically female genitalia, bodily characteristics, and brain structures.

"Therefore, many normal men have rather more feminine behavioral characteristics, and many normal women have rather more masculine behavioral characteristics. Little of the overlap, however, predicts homosexuality."
[3]  APA's New Pamphlet on Homosexuality De-emphasizes the Biological Argument, Supports a Client's Right to Self-Determination, by A. Dean Byrd, Ph. D., MBA, MPH
[4]  "How Might Homosexuality Develop: Putting the Pieces Together," by Jeffrey Satinover
© Frank Maguire