Frank Maguire
Not bewitched, but somewhat bothered and bewildered - a mixed bag

May 19, 2011
It's been one of those days when I had nothing of any value to do but sit and mull. "Mull," like, you know cogitate? Ponder? Ruminate?

I saw Fox News for a few secs, though some of their " 'casters" I cast-off hastily. Must be their personality. Or, it could be that I lack patience. 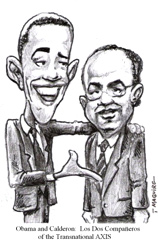 Prima facie (pronounced in classical Latin "preema fahkeeay") one would think that Mexico is showing how hard they are working at interdicting illegal immigrants entering that economic paradise Estado Unidos de Mexico. Where work is so plentiful that persons are actually queueing-up to earn the big bucks!

Today's news has it that the 500 plus-minus uninvited immigrants without papers, packed into two large trucks, were nabbed by the Mexicano Federales. They were headed for, allegedly, the U.S.

Bravo, Mexico for protecting our borders. Clearly what the U.S. needs is a "Security and Prosperity Partnership" with our conscientious neighbors, Canada and Mexico. The "partnership" I call "USACanaMex," (Sorry, Jerry Corsi, I'm just doing my facetious Irish humor thing.)

Mexico, your timing is perfect since it is coeval with the Obama early-campaign-speechifying having to do with the plight of the undocumented worker, and how if we work together with Mexico and groups like La Raza Unida, we will be ordering in a new, compassionate world where the leon will be able to lie down with the borrego.

I just love to use the Spanish word for "lamb" — borrego. It fits my purpose, here, so well.

I have been paying attention — probably more than your average "shepherd." If Mexico has been so active in protecting the U.S. borders from illegals who are using Mexico as a route to the U.S., how come I have never heard of or seen such well publicized interdictions before. One would think it would be daily news. "Mexico Actively Diligent in Protecting United States Border" But? Nada! Until now!

Gosh, I know how this is going to sound to some. "Maguire, you are a conspiracy theory loony-tune." Please, bear with me and help me out, here.

On the Fox news report the "touristas" packed into the trucks like sardines came from about 10 nations around this great big world. The usual Latino countries were named, of course, which is no surprise at all but just status quo ante. However! On the reported-upon list are many distant parts one would not expect...where one would think it unusual for persons to head for Mexico so that they could sneak into the U.S.

Many nations were mentioned, including China and Japan. Japan? Say what? Why would the Japanese have to get to Mexico and pay coyotes $7000 per capita for an extremely non-salubrious ride in a potentially deadly packed-truck environment in order to enter the United States? Aren't there easier way for Japanese to sneak into the U.S?

That is troublesome to me, but what is more interesting is that not one single middle-eastern country under jihadist-Muslim control was on the provided list. I know there is a problem here, because I know, from reliable information, that of the 20% of the illegals now entering the U.S. who are OTMs ("other than Mexicans") a fair percentage is known to be from Muslim nations who make their hatred of the U.S. well known.

So, my fellow borregos, doesn't it make you wonder whether we are being played as "naïve and innocent persons?" Victims of a "canard, false story, hoax?"

And, In Bag Number Two!

Many persons ask "Why were Obama and his controllers successful now at pulling-off a virtual Coup d'État ."

Well — and I won't even attempt to defend myself against imbeciles who know nothing about me, my history, or my quite racially diverse family — to begin with, Obama is very...colorful. This color-issue greatly appealed to the literati, the glitterati, the palpitating female, those with frisson between the thighs tendencies like Chris Matthews, and of course, a great number of hopeful Blacks. I don't think my writer/musician brother Lloyd Marcus would disagree <(http:/www.renewamerica.com/columns/marcus/110512>(http://www.renewamerica.com/columns/marcus/110512). 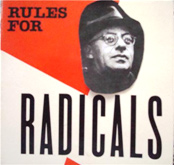 A familiarity with Lenin and Saul Alinsky (Rules for Radicals; Reveille for Radicals) is helpful. Also, a New York Times bestseller that I read back in 1998, Unlimited Access: An FBI Agent Inside the Clinton White House, by Gary Aldritch would aid understanding.

Bill and Hillary Clinton were a bridge for Barack Obama and their Progressive allies. Their rather wondrous success convinced the Progressives that the time prophesied by Lenin and Alinsky had possibly arrived. The crop of American voters was ripe for the picking. "Act now," the cadres on the Marxist Left canted collectively, while marching in cadence.

I close with this quote from Alinsky's Rules for Radicals and ask you to apply it to our current political status. "Men don't like to step abruptly out of the security of familiar experience; they need a bridge to cross from their own experience to a new way. A revolutionary organizer must shake up the prevailing patterns of their lives, agitate, create disenchantment and discontent with the current values, to produce, if not a passion for change, at least a passive, affirmative, non-challenging climate."

So, guys and gals, whuddya think?