May 20, 2011
"Elections aren't the solution when the law of the land is in the eye of the bully of the moment." "The Carol Menges Axiom"

"Fascism does not accept the liberal dogmas as to the sovereignty of the consumer or trader in the free-market.... It does not allow that market freedom and the opportunities to make competitive profits are rights of the individual.... (Such decisions should be made by a) "dominant class...the elite." Laurence Dennis Fascist economist

Square circles! No, this article is not about linguistic non-sequiturs. Not entirely! It's about bureaucratic nonsense and globalist government, particularly the totalitarian constructs of the United Nations. One will find the concept of sustainable development spelled out in the U.N.s Agenda 21. 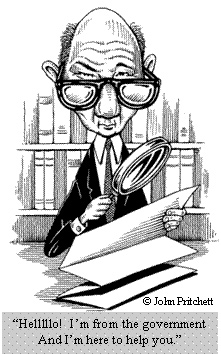 When government planners sermonize upon sustainable development, what are they preaching? What do you think they are talking about? To decipher it for public understanding, we have to start with the denotative meaning of each word, put them together, try to figure out what the words mean in combination, and then try to fathom what the phrase connotes to those who parrot it. Their explanation will be even less instructive than asking a fish about "wet."

"To sustain" has a number of meanings, but essentially it means "to keep in existence; maintain or prolong." "To develop" also has many meanings, but in the context in which government planners use it, it means to "come into being or activity; to make fuller, bigger, better." Putting them together, the government becomes the developer who will assume the role of originator and maintainer of business creation, sustenance, and growth. Let me give you an analogy that shows the difference between what a reasonable citizen means by sustained development, and what the government controllers mean.

First, what would I mean, as head of a family, if I strove for sustainable development? It would be my duty to determine how to develop security for my family for whom I am responsible. They are my family, and my economic responsibility. I must provide by planning, working, investing, saving, and spending frugally. When prices rise and taxes creep-up, or some temporary setback interferes with development, I can not sustain a standard of living that puts my family's development in jeopardy. This is the way any intelligent family manager operates. Wants become subservient to needs. Luxuries and deficit spending are hazardous to real development. And, I don't have authority to take money from my neighbors. If I took that is theirs, I would be called a thief and prosecuted.

Then, there is the redundancy called the "living wage." Redundant, because our "wage" is that upon which we live — regardless of what it is. The alternative is not pleasant. No one speaks of a "dying wage" except God — "The wages of sin is death." Wages can't successfully be imposed by some regulatory body. They are a product of personal skills, training, employer demand for one's services, and the consumer's demand for one's services and the products of one's services. The reality is that each working person regulates one's own life in a manner that allows him or her to live on his or her wages. Then, through hard work, more training, and, sometimes, luck, one tries to earn higher wages. No government can mandate, control, and regulate this. No government can develop or sustain these free-market elements. To even talk about it shows total ignorance of the free-market, and destroys all the credibility of those oligarchs who would regulate.

How does government develop? In boom and bust cycles, governments always whine about the busts. During booms, the government luxuriates, expanding and aggrandizing. It creates non-sustainable infrastructures, including propagating their own kind. Without the slightest intent of creating an anatomical metaphor, it isn't the bust that is the fundamental problem, it is the boom. Booms are never sustainable. The attitude in government should be bigger busts and smaller booms. Think bust! It removes the temptation to throw the taxpayer's money around like a drunken sailor.

There is, what I call, economic Darwinism. Many businesses, even well capitalized companies with good management, fail. Businesses, like dinosaurs, become extinct. It is a law of economic nature. What happens when government monkeys-around with this natural law? What happens when overweening oligarchs arrogate to themselves the function of "developing" and "sustaining" businesses?

The driving force in the free-market system is the risk-taking entrepreneur. The woman or man who dreams, "I want to start a business. I have a good idea. I will risk my labor and my capital to try to make a go of it." They might be optimistic about success, but most are realistic. So they develop and strive to sustain — never a guarantee outside a type of government imposed sustenance, which is authoritarian control and virtual ownership of what started out as your business. Some persons make it and some don't. That's the free-market way. Much too messy for the martinets in government...to unpredictable! They don't like the insecurity that comes with not having control. This is, in fact, why most choose to work for the government.

After all is said and done, in the natural law of business survival, the consumer picks the winners — who is most fit to survive. Consumers are happy, businesses and the economy grow, and the government gets it cut. Absolutely salubrious! Unless! Unless the government interferes! How do governments do this? Look at Oregon. With its penchant for committees, agencies, and hodge-podge of regulators, who just won't be happy unless they are filtering the free-market system through their "smart-growth," and "sustainable development" sieves!

And, those favored and protected "uniquely qualified" businesses who ally themselves with the government under the great public-private cooperation aegis get to help decide what other businesses might be "sustainable." Such a deal! Let me call you "sweetheart." A well- developed romance that both want to sustain.

When you are cajoled with phrases like sustainable development, smart-growth, and living-wage, you should think about the great difference between what you, as a tax-paying, wage-earning, family-provider means, and what the self-sustaining and always developing government means. Personally, I think the planners are full of everything but real economic freedom and real economic growth.