November 30, 2011
"Lest we forget at least an over-the-shoulder acknowledgment to the very first radical: from all our legends, mythologies, and history (and who is to know where mythology leaves off and history begins — or which is which), the first radical known to man who rebelled against the establishment and did it so effectively that at least he won his own kingdom — Lucifer." Rules for Radicals, Saul Alinsky

"A radical programme of social legislation, particularly unemployment insurance; the shifting of the burden of taxation to the wealthy classes; free popular-education — all these and similar measures, which in themselves do not exceed the framework of bourgeois society, must be inscribed on the banner of the proletarian party.... "Alongside this, however, demands of a transnational nature must be advanced...the nationalization of mineral resources; the nationalization of the banks; workers control of industry, and, finally, state regulation of industry." "The Spanish Revolution," Leon Trotsky (1931)

"There are old-line anti-Communists who still insist that it was all fake, that it is all a deception, that the Communists are still running the show in Russia. They do not understand the difference between fascism and Communism. The Russian system is fascist to the core: state-run capitalism.

"We are now seeing what hard-core liberals always predicted would happen: the economic convergence of the two systems, USA and USSR. The system of economic convergence is fascism. That was what the liberals always wanted, but called it something else: 'economic democracy' or 'the government-business alliance.' Economic Fascism and the Bailout Economy, Mises Daily, (Feb. 20, 2009) Gary North

"The World is progressing, the future is bright and no one can change this general trend of history. We should carry on constant propaganda among the people on the facts of world progress and the bright future ahead so that they will build confidence in victory." "On the Chunking Negotiations" Selected Works, Vol. IV, Mao Tse Tung (Oct 17, 1942)

"According to Sarah Brady, as reported by the (Washington) Post, President Obama told her, 'I just want you to know that we are working on it (the issue of gun control).... We have to go through a few processes, but under the radar." America's First Freedom, Wayne LaPierre, (December 2011)

Friedrich A. Hayek as a young economist from Vienna delivered a series of lectures on monetary theory, in 1931, at the London School of Economics. The lectures were later published as the book Prices and Production.

In 1932, on the basis of his lectures, Ha yek was appointed to the Tooke Chair of Economic Science and Statistics where he remained until after WWII.

Hayek's magnum opus is The Road to Serfdom. Here, I write specifically about Propaganda, the focus of his Chapter X: "The End of Truth."

In this chapter, Hayek develops the fundamental contrast between "totalitarian propaganda" and that which we can call, broadly, the "propaganda" of what he refers to as "individualism" i.e., "the propaganda made for different ends by independent and competing agencies."

Hayek uses the concept of "Gleichanschultung," i.e., "coordination." The term was used by the NAZI efforts to "coordinate" all political, economic, cultural, and even recreational activities in support of the State. In America we call this fascistic program "progressivism." 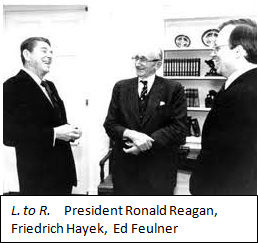 Hayek's thesis statement is offered early in his chapter "The End of Truth."

"The moral consequences of totalitarian propaganda, which we must consider are (that) they are destructive of all morals because they undermine one of the foundations of all morals: the sense and the respect for truth."

For totalitarians to succeed they must attempt to convince the populace that truth is subjective. There is no "objective truth," there are only relative truths. This is accomplished by capturing a nation's education-system. Succeeding in this they are positioned to engage in diseducation, miseducation, and historical revision.

We watch the chaos being wrought by the progressivist Obama administration using abstractions like "Change" and "Progress," the foundations of moral truth became twisted. What Americans when once relied upon — Judeo Christianity and the U.S. Constitution and Declaration of Independence — are strategically and tactically refuted? "Crises" are created, confusion reigns, and the American citizen has become immersed in a culture of propagandistic deception. The population at large concludes that no one can be trusted. The result is demoralization and a feeling of hopelessness. This is how Progressivism advances.

Progressivists employ what I call the propaganda of Lucifer and — propaganda of the Lie which traces back to mankind's beginnings.

"The Lord God commanded him you must not eat from the tree of the knowledge of Good and Evil, for when you eat of it you will surely die," (Genesis 2:15).

Lucifer said to Eve, "You will not surely die.... For God knows that when you eat of it your eyes will be opened, and you will be like God, knowing all good and evil."

Hayek shows how Progressivism makes use of Lucifer's rebuttal to God's command. The essential task for progressives is to destroy the "myths and legends" that Americans accepted for generations as Truth, relegating all to the category of Lies. They labor to replace the commonly accepted truths with their real truth — proposing their own morality — their own created myths and legends.

"In order to induce people to accept official values, these (the Progressivist values) must be justified, or shown to be connected to the values already held by the people...expressing not merely ultimate values but a whole host of beliefs about cause and effect which, once they have become ideals direct the activities of the whole community, and must not be questioned."

Such is that which the Progressives mean by "Change" and "Progress."

The system of individual liberty: "The citizen in a free 'society' finds out about the conflicts between different needs as he goes along, and he has to make (personal) decisions as the necessity arises. The code of values guiding his decisions does not exist in abstracto before the decisions have to be made; it has to be created with the particular decisions."

I'll close with Hayek's assertion that "the most effective way of making people accept the validity of the values they are to serve is to persuade them that they are really the same as those which they, or at least the best among them, have always held, but which were not properly understood or recognized before."

The progressive's task — their "end" — is to define "properly understood." To accomplish this they seek power by any and all means that will produce their desirably decisive end.

"We are advocates of the abolition of war; but war can only be abolished through war, and in order to get rid of the gun it is necessary to take up the gun." "On Contradiction" (August 1937) Selected Works, Vol. 1, p341

"Every Communist must grasp the truth," "Political Power grows out of the barrel of a gun." "Problems of War and Strategy" (Nov 6, 1938) Selected Works Vol. II, p224 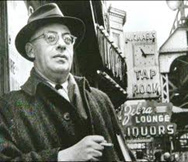 Alinsky:"(Ours) is a world not of angels but of angles where men speak of moral principles but act on power principles." (Rules for Radicals, Saul Alinsky)

That perennial question, "Does the end justify the means?" is meaningless as it stands; the real and only question regarding the ethics of means and ends is, and always has been, "Does this particular end justify this particular means...? The end is what you want, and the means is how you get it.... The man of action views the issue of means and ends in pragmatic and strategic terms. He has no other problem; he thinks of his actual resources and the possibilities of various choices of action. He asks of ends only whether they are achievable and worth the cost; of means, only whether they will work." (ibid.)

"We don't solidarize (sic) ourselves for a moment, with the (democratic) illusions of the masses; but whatever is progressive under these illusions must be utilized by us to the utmost otherwise we are not revolutionists." "The Parliamentary Cretinism of the Reformers.... " "The Spanish Revolution," Leon Trotsky (1931)

"Do not close your eyes to your weaknesses, do not inflate yourselves by illusions. The revolution does not believe in words. It tests everything and what is more, it tests it in blood." (ibid)

"Our task of creating a Socialist America can only succeed when those who resist us are totally disarmed." Sarah Brady, Chairperson of Handgun Control, to Senator Howard Metzenbaum

"Ask Congresswoman Carolyn McCarthy, D.-N.Y. Before Obama's inauguration, she pressured Obama's transition team to back her ban on ammunition magazines. But as she later confided to Newsweek 'They told me that's not for now, that's for later.'" "Obama's Secret Plan to Destroy the Second Amendment by 2016." America's First Freedom, December 2011, Wayne LaPierre