June 15, 2009
I still remember the knot in my stomach upon seeing the sea of white faces from the window of our school bus. It was the first day of school 1961. We came from a neighboring black community, about a hundred or so of us, to the newly integrated white Jr./Sr. high school with thousands of students.

EVERYTHING intimidated me, the massive school building, being around whites for the first time, feeling small, seventh grade school work (would I measure up), and my stutter. 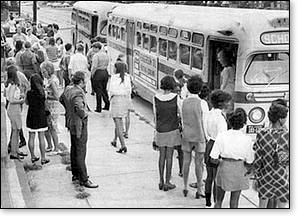 The night before, I shared my fears with my preacher dad. Dad gave his typical answer, "Trust God."

Someone grabbed me from behind. It was an angry older white teacher with a crew cut. He spun me around and almost pressed his wart-covered nose against mine. In my haste to find my homeroom, I went the wrong way on the stairs. Stammering and scared, I tried to explain that I was lost. But he refused to listen and carted me off to the principal's office. There I sat on my first day, a 'problem kid' and late for homeroom.

However, things did get better. Mr. Gomer, my art teacher, and Ms. Hornet, my English/creative writing teacher, recognized my talents and nurtured them. Still, I felt pretty invisible at Brooklyn Park Jr./Sr. High in Maryland.

The popular black students in the mostly white school were athletically and/or academically gifted. I was neither.

This achievement helped me to realize I had talent. It dramatically impacted my self-esteem and life. I won scholarships to art college and enjoyed an award-winning career as a television Graphic Designer.

But what if my school had embraced a liberal mindset so prevalent today? "EVERY child should experience the feeling of having their artwork displayed in the lobby. It's only fair." If every student's artwork was displayed, it would have robbed me of the knowledge that I possessed above-average artistic talent.

Liberals frown upon individual achievement. I heard a news story about a kid banned from Little League pitching because he threw TOO hard. Rather than welcoming an opportunity to raise the game of the batters, liberals chose to force the gifted pitcher to lower his game. Many schools even ban the keeping of score at sporting events. Typical, touchy, feel-ly, let's not cause ANYONE to feel bad, liberalism.

God forbid kids learn that sometimes you win, sometimes you lose, and these experiences make you STRONGER! It's called LIFE! It's how we grow. Without failure, you would never experience the joy of success.

Some of you may be thinking, "Why is Lloyd ALWAYS ranting about liberalism?" Folks, I have witnessed the devastating effect of liberalism in my own family. A forty-something drug addicted cousin is a serial "impregnater" with several out-of-wedlock children. And yet, he enjoys a new townhouse, food stamps, free health care, and methadone all funded by WORKING taxpayers. In essence, the government is enabling and funding my cousin's irresponsible lifestyle.

American taxpayers are extremely generous, sympathetic, and more than willing to help those in need of a hand up. But liberal "cradle to grave government dependency" programs kill incentive and ultimately hurt people.

Here is another example of how touchy feel-ly liberalism overrules common sense and what is best for people. Without question, to move economically forward in America, it is most beneficial to speak English. Those who do not are stifled and stuck in minimum-wage jobs. And yet, ANY politician courageous enough to merely suggest that immigrants learn English is crucified for racism. THIS IS CRAZY!

Meanwhile, frustratingly, conservatism gets the bad press BRANDED as mean and heartless.

Conservatism 101: A Tale of Two Dads by Lloyd Marcus. Little Johnny hates school and does NOT want to attend. Liberal dad says, "I know how you feel. I hated school also. There are bullies, kids who think they're hot stuff and it is just too HARD! You can sleep as long as you like."

Conservative dad says, "Jonathan Matthews (and his last name) you get your rear end out of that bed this instant and off to school. Why? Because I SAID SO and it is best for your future! And also, because I LOVE YOU!"