Despite the grueling travel and temperatures over 100 degrees, Mary and I did the tour because the American people need to see patriots standing up for our country, police and president. Wicked fake news media is deceptively promoting violent, anti-American, Marxist domestic terrorists as saints. Democrat governors and mayors have given Marxists free rein to wreck havoc in our streets.

Deranged Democrats seek to indict a married couple for not allowing a Black Lives Matter mob to burn down their home and murder them and their dog. Fake news media is mute about BLM ambushing, shooting and murdering a young white mother for daring to say, All lives matter."

Americans are frustrated that the GOP has displayed a lack of testosterone in pushing back against Marxists terrorizing law abiding citizens. Thank God for President Trump saying he will deal with the terrorism if Democrat governors and mayors persist in betraying their constituents.

Conservative Campaign Committee initiatives are multilayered; TV and radio ads, phone-from-phone, social media and sign waves. Rallying locals to join our CCC crew to wave signs at prominent intersections is powerful because it creates a spectacle and shows commitment to GOP candidates and Trump. Publicly supporting Trump is extremely important and powerful because Democrats and fake news media have emboldened Marxists to beat the crap out of anyone who opposes their treason. 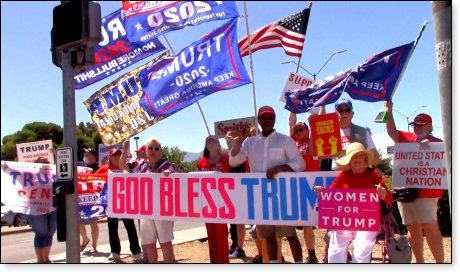 After surviving the 110 degree heat in Boulder City, our crew drove to meet patriots in Kingman, AZ for a sign wave. We were greeted by excited locals. The Arizona Freedom Militia was there to protect us. We were mostly strangers meeting for the first time. And yet, the fellowship with the Arizona patriots felt like a family reunion. We were united in love for our country and faith in president Trump's commitment to making America great again, again.

A motorist pulled in, lowered his window and beckoned me. Here's 100 bucks, please use it for water and snacks for your crew. Go Trump!

To say Kingman motorists were starving to see public support for Trump would be an understatement. Motorists excitedly behaved like we were rock-stars standing on a street corner. They enthusiastically honked their horns, excitedly waved and gave us thumbs up. Many motorists captured our spectacle on their phones. 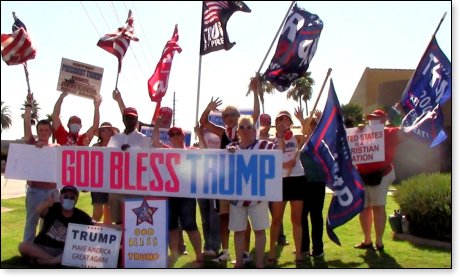 A fired-up Hispanic woman joined us carrying a large Trump flag. She kept screaming, He lies! He lies! Sleepy Joe Biden lies! I did a video interview with her. Dawn passionately warned us not to allow socialists to takeover America like they did her former home, Venezuela. She ranted about how they used the same tactics; destroying history and making false promises. Please view my video with Dawn.

A motorist named Dave was so excited that he parked his car and rushed over to express his thanks and appreciation; showering our group with praise. I asked Dave why our sign wave meant so much to him. As Dave expressed his concern about the destruction of our country he teared up, which caused me to tear up. We hugged.

I will be releasing brief video interviews with patriots at the Kingman and Sun City sign waves.

Like Kingman, the majority of motorists at our Sun City sign wave were passionately supportive of Trump. Anti-Trump motorists were extremely vitriolic, giving us their middle finger.

I had a striking exchange with a seemingly upper-class older white man at our Sun City sign wave. He pulled up and rolled down his passenger window. He leaned over his little boy passenger and began furiously yelling, F*** Trump! I calmly replied, God loves you which enraged him. He chanted, F*** Trump louder and angrier. Again, I calmly replied, Jesus loves you, which sent him over the edge. Frenzied with spit flying, he repeatedly screamed, F*** Trump, f*** Trump, f*** Trump...!!!

He appeared moments from ripping the steering wheel off his car; frustrated that he could not jump out and rip my head off. His young passenger sat quietly watching the man behave like a madman. Clearly, this poor man has spiritual issues.

While at the Phoenix airport waiting to fly home, I noticed that even airport personnel took breaks from the mandate that everyone wear a mask at all times. Despite the CDC and pediatricians saying it is harmful for children two years old and under to wear masks, I saw toddlers wearing masks. I felt bad for my used and abused fellow Americans. Fake news media have Americans terrified, believing that catching covid equals a death sentence. Covid has a 98% recovery rate. The lock-down has destroyed lives, family fortunes and businesses. Suicides are skyrocketing. Americans are severely suffering under the iron fist of nonsensical Draconian covid mandates.

Average Joe Americans would have a difficult time believing that Democrats and fake news media are so wicked that they are using covid and George Floyd to inflict pain on the American people solely to stop Trump's reelection.

Mary and I will be hitting the road again soon to campaign with the Conservative Campaign Committee in other battleground states. This is war folks, a battle to stop Democrats from transforming America into a communist nation. On behalf of my fellow baby-boomers, we will not allow that to happen on our watch! Trump Train 2020