Lloyd Marcus
As a black conservative, should I be afraid?

August 8, 2009
I thought, "This is crazy." Despite numerous attempts to convince myself that what I was feeling was absurd, the tingle in my stomach persisted. Black conservative Kenneth Gladney was beaten by SEIU (Service Employee International Union) thugs for selling buttons at a Town Hall meeting in St Louis. Gladney's beating included racial slurs. He spent two days in the emergency room. 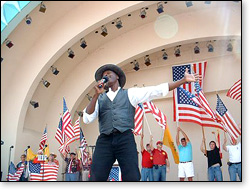 President Obama gave marching orders to union thugs, ACORN and his followers to "push back harder" and "get in the faces" of American citizens who oppose his Health Care bill.

I have been very outspoken in my national columns opposing Obama's far-left agenda. Beginning late August, I am touring nationally with TeaPartyExpress.org.

As a black conservative, or "an Uncle Tom stupid 'N'" as I've been called, will my punishment be particularly severe?

I keep telling myself, "Lloyd get a grip. Physical intimidation politics is not the American Way."

Horrendously, President Obama has disdain for the American Way. He prefers, the Chicago Way.