Lloyd Marcus
LIVE from aboard the Tea Party Express II

November 2, 2009
I'm going to let the cat out of the bag. I confess. The bulk of the folks attending the Tea Parties across America are good old fashion God fearing Christians. They work hard, love their families and their country. If they are racist, you cannot prove it by me.

I'm traveling across America on Tea Party Express II. The mostly white audiences at every rally embrace me with open arms, especially after hearing me proclaim myself to be an American rather than a politically correct hyphenated African American. These people love me and call me brother because we share a love for our country and the principles which have made her great. At every rally, I feel like I am with family. 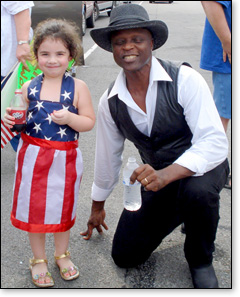 Countless numbers of attendees have told me they are praying for me. Somehow, I don't think you would hear such a comment at rallies hosted by the Left. Rallies hosted by the Left display very few, if any, America flags. Nor would they ever consider honoring our troops. Our Tea Party Express rallies enjoy a sea of American flags. We also feature a tremendously moving tribute to our veterans, active troops and their families at every rally.

Our mission on the Tea Party Express is to give hope and inspire these patriots to fight back. And they are fighting back Big Time; everyone in their own small or large way.

A 74 year old woman has just begun writing a weekly conservative column in her local newspaper. An elderly gentleman has launched an organization to fight corrupt politicians. He currently has two members. Large numbers of first timer conservative candidates for political office are sprouting up all over the country. Moms across America are organizing to restore and preserve conservative values for their kids. Thousands are writing hand written letters to Washington.

An elder gentleman who survived cancer four times told me, "My time is about over. I joined the Tea Party Movement for my grandchildren."

At our Tea Party Express rally in Carson City, NV, it was freezing cold. Still, hundreds showed up. A gentleman gave free cups of coffee to everyone. His coffee machine was powered by a generator. Again, there was that feeling of family; we're all in this together.

In Portland, OR, the hall where we held our Tea Party Express rally was packed with 3000 patriots with another 1000 outside. Everyone was polite and united in our cause; Take Back America!

Folks, this movement is totally passion driven. No political party, marketing firm or single organization could have started and sustained it. People have begun to realize America made a huge mistake electing Barack Hussein Obama. Despite being ignored by most of the main stream media, the Tea Party Movement is growing.

All of the speakers and performers on the Tea Party Express have received threats and hate mail. The Left knows we are inspiring and energizing the patriots. They want to shut us up. I am extremely proud to be numbered amongst this great team of patriots committed to God and country.

At every rally I perform my original, "American Tea Party Anthem." Then I sing my parody to the song, "New York, New York" titled, "2010." To make it fun, I ask a dozen ladies from the audience to come on stage. The sound man hits the music and the women instinctively form a chorus line. The audience goes crazy when I sing the lyrics, "We're gonna vote them out...and Take Back America in 2010."

The first Tea Party Express tour focused on the big cities major markets. This second tour is through the heart land small towns. Still, the crowds have been surprisingly large. People are desperate. They need hope. Somehow, we feel our purpose is stronger and more important than our first tour.

It has been difficult and uncomfortable. And yet, we feel honored to do it; traveling, meeting, inspiring and bringing hope to our brother and sister patriots across America. We truly are all in this together.