Lloyd Marcus
Libs scold black conservatives "who the 'H' do you think you are?"

December 21, 2009
A young married couple, Paul and Nancy were neighbors of mine back in the seventies. Nancy was extremely excited. An unexpected opportunity arose for her to attend college. This would broaden her horizons and enable her to pursue opportunities beyond her current minimum wage jobs. Paul was dead set against it. He confided in me, "I'm afraid if she gets educated, she may not want me anymore." I thought, "So rather than allowing Nancy whom you profess to love to be all she can be, you would prefer to keep her down." 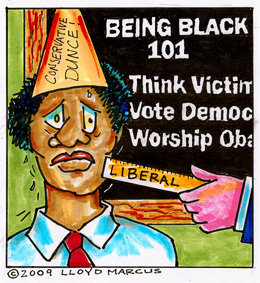 In the eighties, I was a member of a team of six artists at a Baltimore TV station. They hired a new kid. Jeff was talented, enthusiastic and ambitious. Whenever someone came in the art department with a request and our supervisor was unavailable, (while other artists ignored them thinking it's not my job) Jeff stepped up and took care of them. Jeff's attitude caused tension between him and our union. While the union could not nail Jeff for doing anything outside of the restrictions of our contract, the consensus was he was too friendly with management and eager to do things beneficial to the company. The real conflict was Jeff's nature drove him to excellence and our union encouraged group mediocrity.

I shared these two stories as examples of attempts to stifle personal greatness. Folks, liberals (black and white) have been stifling black American individuality and greatness for years while deceptively shrouded in compassion. In reality, liberals' true attitude towards independent blacks is, "Who the "H" do you think you are? How dare you achieve success without us."

Liberals use intimidation and punishment to rein in blacks who bypass their formula for success. Dr King believed in personal responsibility. He required his fellow marchers to be clean, sober and even tempered. He marched and gave his life for fairness, not special concessions. By the way, Dr King was a Republican.

The liberal media celebrates black achievement only when it comes from an, "I made it in spite of America's racism" point of view. Blacks who proclaim, "I achieved because America is the greatest land of opportunity on the planet for all who choose to go for it" are vilified by the media; branded Uncle Toms and traitors to their race.

The Left's message is clear. To be authentically black and faithful to their race, blacks must not achieve on their own, view themselves as eternal victims and reserve at least a minimal resentment against white America.

While in the supermarket checkout line, I saw Rev. Al Sharpton, the poster child of the "America Sucks for Blacks" campaign, on the cover of Ebony magazine. Gag me.

I searched the internet. Former U.S. Secretary of State Condoleezza Rice or U.S. Supreme Court Justice Clarence Thomas have never been featured on the cover of Ebony magazine. Think about that. Before the election of Obama, the two most powerful blacks in America, (Rice was the most powerful woman in the world) have never graced the cover of black America's most prestigious magazine. Why? Because most black media outlets wish to keep the "blacks need liberals to achieve" thing alive. Rice and Thomas achieved their phenomenal success the old fashion way, they earned it.

Sharpton on the cover of Ebony magazine is typical of liberal black media's betrayal. They have been feeding their people spin and mis-truths for years, all of which is designed to keep blacks on the government dependency plantation and voting for democrats.

Imagine how empowering it would be for blacks if Ebony featured a self made black conservative on it's cover. When I say, "self made," I do not mean without any assistance. No man is an island and all who succeed had help along the way. I am talking about achieving through education, hard work and doing the right things as opposed to the liberal demeaning path to success which is lowered standards, playing the victim card and affirmative action.

Frustratingly, entrenched false paradigms are difficult to break. The Republican party was partly founded to end slavery. Historically and today, Republicans have proven themselves to be far greater friends to blacks than the democrats. And yet, most blacks believe Republicans are racists. Despite numerous mega-rich blacks and America electing a black president, most blacks mindlessly embrace the liberal lie that America has not changed much since the 1950s. Compassionately, I want to grab black America by the collar and slap it while yelling, "Wake up...snap out of it!"

I know two black brothers. The elder has a factory job which he hates for 20 years. His mind is infected with liberal rhetoric, "The American system is designed for blacks to fail." Meanwhile, his younger brother ignored the lies and started his own successful janitorial business shortly after graduating high school.

Life is about choices. Liberals do a great disservice to minorities by constantly attempting to convince them they are eternal victims unable to achieve without liberal intervention. It has been said, "If you love someone, set them free."