February 11, 2010
I struggled with whether or not to discuss this topic. Our Haitian neighbors are suffering tremendously. I am extremely proud and thank God that we, America, were first on the scene, doing what we always do: come to the rescue of people in need. I questioned, "Lloyd, are you making much ado about nothing?" Well, you be the judge. 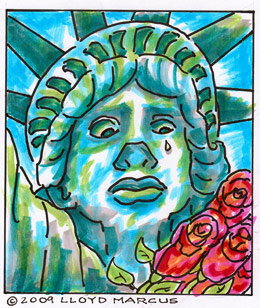 I am confident that Indianapolis Colts football player Pierre Garçon meant no disrespect to the USA when he waved the Haitian flag after the Colts' victory over the Jets in the AFC championship game. However, I must confess that it rubbed me the wrong way. Please, this is not a rebuke of the young, excited athlete. He simply wanted to give hope and a shout-out to his homeland. I only wish Garçon had waved both flags: the Haitian flag and Old Glory.

Frankly, I feel that taking pride in being an American simply is not what it used to be. In his 1989 farewell speech, President Ronald Reagan expressed his concern that the kind of patriotism we grew up with was fading away. I call it "patriotism cooling." Reagan said that parents were questioning the necessity to teach their children about the greatness of America and the sacrifices which were made for the freedom and liberty we enjoy. Garçon not even thinking to wave the U.S. flag is testimony of the "patriotism cooling" Reagan saw coming.

Unlike "global warming," "patriotism cooling" is real and extremely dangerous. In our schools, national pride is considered biased, ignorant, and rude. How dare we think of America as exceptional?! Our kids are no longer taught the incredible sacrifice our boys at Normandy made for freedom. I recently read that educators are pushing a new curriculum which would eliminate much of America's early history. The more ignorant our kids are of the value, the struggle, the uniqueness, and the price of freedom, the more passive they are when freedoms are systematically taken away. And yet, our schools are teaching songs about Barack Hussein Obama, mmm...mmm...mmm.

Patriotism cooling did not happen overnight. Incrementally, à la death by a thousand cuts, America has been dissed by television, Hollywood, schools, Democrats, the left, and most outrageously, even the President of the United States. Democrat Congressman Jack Murtha accused our military of rape and murder. Democrat Senator Dick Durbin accused the America's treatment of GITMO detainees as being equal to the Nazis' death camps, the Soviet gulags, and the genocidal campaigns of Pol Pot. President Obama accused the U.S. of arrogance. He chastised us for consuming too much and settings our thermostats too high. Obama travels the world bowing to foreign leaders and apologizing for our country.

Unquestionably, the Left's constant bashing has instilled in some Americans a negative perception of their country. Actor Danny Glover even blamed, believe it or not, the earthquake in Haiti on the U.S. I received the following e-mail from a grandmother who agrees. She wrote, "...we are the ones who are killing the world with our own destructive ways. It just goes to show you we have to change the way we live." Hogwash!

Truth be told, America is the greatest, most generous, and most compassionate nation on the planet.

Private citizens gave an estimated $240.92 billion to aid the victims of hurricane Katrina.

The U.S. has donated billions to Haiti over the years. Thousands of missionary organizations have been attempting to help Haiti for years. Haiti earthquake relief contributions from the U.S. far exceed the contributions of all other countries combined.

A byproduct of the Tea Party movement is a resurgence of patriotism. While I am encouraged and grateful, we still have a long way to go. Our children must be taught American exceptionalism. They must be educated about the cost of freedom, which is extremely precious, fragile, and unique to most of the world.

Americans must stop allowing themselves to be intimidated by the left. Under threat of taking it out on their kids via a lower grade, parents were forced to watch the Al Gore propaganda global warming movie. Gore's film is another "cut" to our country. It contributes to the left's orchestrated, anti-patriotic, "we're the world's bad guys" agenda.

My friends, Lady Liberty deserves much better. Please, stand up for America. Teach your children. I've penned a Haiti relief song titled "Haiti Relief is Who We Are." Sadly, it is unique because it praises America rather than bashes her. My song celebrates the generosity and greatness of America. It is unfortunate that for these reasons, the song will be considered controversial. Nevertheless, I join with Ronald Reagan in seeing America as it truly is: "a shining city on a hill." I pray you will do the same.