February 16, 2010
It appears everyone and his brother is seeking to categorize, direct and control the incredible increasing powerful phenomenon known as the Tea Party Movement. Some say it is doomed to fail because it does not have a single charismatic leader. Some say taking a stand on social issues such as abortion is death to the movement. Stick to the Constitution is their mantra. Some fret, what about the in-fighting and groups splintering off to form new groups? Ticket prices sparked controversy at the first Tea Party Convention. Some believe the movement should forever remain grassroots. Some say the GOP is hijacking the movement. Some say we should not pick candidates. Some say it is silly not to pick candidates. 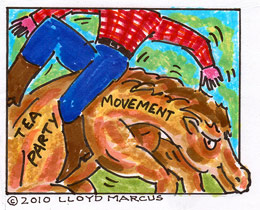 During CNN and BBC radio interviews, I was confronted as a black conservative with, "And what about those racist signs at the Tea Parties?"

Yes, the feelings, thoughts and opinions of Tea Party patriots are all over the place. What a mess! Well, I say how wonderful! I mean, think about it. Millions of Americans who have been passively watching our country slipping away for years are suddenly passionately seeking to restore it. So, frankly, I do not care that the movement is a bit wild and free. Scott Brown's shocking historic win in Massachusetts confirms that we are making a huge difference.

To those who caution, stay away from social issues, I disagree. I see the Tea Party movement as being about passion, taking a stand and forcing politicians to listen to we the people. If your conscience and heart drives you to politically fight for the rights of the unborn and allowing God back into the public square, go for it! But, do not war against other patriots who do not share your passion. Focus your energy toward the opposition.

As for the movement needing a single charismatic leader, if or when it does, a leader will emerge.

Reporters love to jump on the issue of in-fighting within the movement. Well, this is going to happen wherever there are human beings. Every movement has opposing strategists, egos, hot heads and plain old bad apples. The Black Panthers broke away from MLK because they thought his non violent civil rights movement was too wimpy.

Jesus' movement only had twelve guys. While they believed in and rallied around Jesus, they all had different ideas about how to get things done. John was about love, Peter was a hot head, Paul thought he was the smartest guy in the room and Judas was a bad apple. The Tea Party movement has millions of patriots. It is impossible to control them. Nor do I want to. Amidst the so called tea party chaos, we stopped government controlled health care, elected Scott Brown and deaf to the will of the people politicians are running scared.

While I have not seen a racist sign at a tea party, apparently a few have been seen. As I stated, every movement has a few bad apples. I have attended over one hundred tea parties around the country and traveling on Tea Party Express tours I & II. 99.9% of the attendees could not care less about Obama's race. They are decent hard working citizens who love their country and disagree with the direction President Obama is taking us. Attempting to simply write them off as "angry whites" is extremely divisive and a supreme display of a lack of character.

It is impossible for the Tea Party movement to remain totally grassroots. Things move forward or backwards. Nothing in life stays the same. The rallies were great, "we're mad as hell and we're not gonna take it anymore," support group events. The logical next step was to organize to do something about our concerns. Thus, I do not have a problem with the movement progressing to the next level.

I also love the charge that the Republicans are hijacking the movement. If the Republicans are finally listening to the people and embracing our issues which are fiscal responsibility, less government intrusion and a strong national defense, I say, Hallelujah! But listen up Republicans, you cannot just talk the talk. You must walk the walk!

For those who are stressed because this high spirited bucking bronco movement refuses to be tamed, chill out. It's all good. Sometimes, I believe, you just gotta let go and let God.

There is one seduction I strongly advise against, a third party. It would ensure liberals winning elections. However, if the Republicans select a liberal turkey to run, we tea party patriots must select a conservative eagle to run against both party's liberals. Now, that's the power of we the people.

So, go forth my fellow patriots. Keep collectively and individually doing whatever your passions and skills lead you to do to Take Back America!