April 1, 2010
Lloyd Marcus here checking in while on the Tea Party Express III tour bus with a 300 mile ride ahead of us. We had two rallies in Utah and we are headed to Grand Junction Colorado. 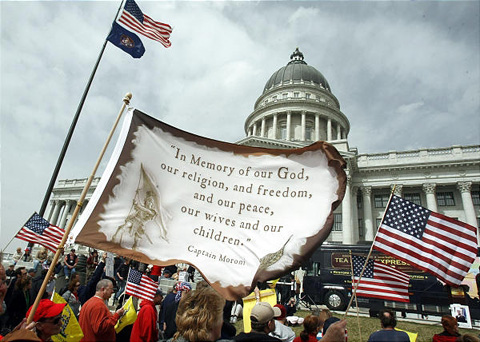 My fellow performers on the tour are seasoned professionals. I am extremely excited about a new refreshing addition to our Tea Party Express team of performers. He is a young 20-something-year-old Hispanic conservative rapper who calls himself, "Polatik." Polatik is a youth minister, husband and father of one, another in the oven, and an entrepreneur.

Polatik is open and honest about his past, which includes prison. He credits his relationship with Christ for turning his life around. He is passionate about teaching kids not to choose the wrong paths. He is a fine young man.

Our Tea Party Express team performs a variety of music. I was not sure how rap would play on the tour. I am pleased to report Polatik has been a hit at the rallies. Audiences appear to be taken aback a bit when his hip hop intro music begins.

But, when Polatik begins rapping about standing up for our Constitution and family values, they enthusiastically embrace and shower him with cheers.

It was hilarious and wonderful to see seniors and people wearing western gear bopping to a Hispanic kid rapping about his beloved country. It confirms that if you love America and stand on principles, you are one of us. It's how we Tea Party patriots roll.

At our Provo, Utah, rally, I chatted with a small business owner named Larry. Larry told me how he and his wife were achieving the America dream. Then Obama signed Obamacare. Larry says this health care monster will cause him to cut payroll and probably end his business. It struck me how liberal-democrat-big-government-grandiose-so-called-compassionate policies always end up hurting the little guy.

I'm a black American who started off poor living in a Baltimore, Maryland, government project. I was blessed to have an intact family, mom, dad, and four younger siblings. When my dad broke the color barrier into the Baltimore Fire Dept., we were able to move to a black suburban community.

Several of my cousins were not as fortunate. They grew up in fatherless homes and on government welfare most of their lives.

Government provided just enough to keep them dependent. A hand up is a good thing. But, government controlling people via cradle to grave dependency is evil. My cousins' lives sucked: drug and alcohol abuse, crime, serial out of wedlock births, etc. Many died young.

And yet, the survivors still faithfully give liberal democrats their votes. Just like Larry, the small business owner in Utah, my black cousins are hurt by big government so-called compassionate interference.

Today, our first Tea Party Express rally is in Grand Junction Colorado. I will keep y'all posted.

All the best, Lloyd