October 13, 2010
Question: When you squeeze an Orange, what comes out? Answer: Orange juice. Why? Because that's what's inside.

Obama is being squeezed by polls predicting a Republican landslide in November. Adding to Obama's pressure is his lethargic base's apathy about voting. So, what came out of our so-called, "post racial" president? Despicable, manipulative and evil race baiting. 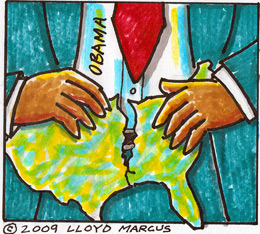 Sunday, Oct. 10th at a rally in Philadelphia before a mostly black audience, Obama attacked Republicans saying "they're counting on...black folks staying home..." Well, what the heck does that mean? What message was the "Great Unifier" attempting to send to black America?

I can only conclude Obama meant, "Look y'all, everyone knows the republicans are really the KKK without the hoods. Republicans along with those white tea party racists are out to get me, your black president. They want to turn back the clock." Obama and companies clever usage of the term "turn back the clock" congers up all kinds of fearful images in the minds of blacks.

Obama saying Republicans want black folks to stay home on election day is a disgusting divisive use of the "race card" unworthy of the president of the United States. Meanwhile, displaying their epic racism, the liberal media excoriates all blacks who do not worship this characterless man. I have been called a traitor to my race, a stupid "N" and endured threat of violence for daring to use my brain rather than a blind loyalty to skin color; and for seeking the best interest of my country and my fellow Americans.

So, while the sycophant liberal media calls any and all opposition to Obama racist, they give Obama carte blauche to exploit his race whenever it serves his purpose.

I heard a knucklehead reporter say, "We must be racially sensitive when criticizing president Obama." Why? Obama's race should be irrelevant. Obama chose to play in the big league as leader of the free world, for crying out loud. And we're suppose to ignore his incompetence, record unemployment, the nationalizing of the auto industry and banks, government hostile takeover of our freedoms, trashing of our Constitution and far left radical agenda because the president is black?

Obama is a Chicago thug politician. The more he is squeezed in the coming weeks before the November election, the more Obama's thuggery will be revealed. Why? Because that's what's inside.