November 20, 2010
Brother and sister tea party patriots, pat yourselves on the back. Congratulations, we did it! November 2nd, 2010 marked a huge step forward in our efforts to take back America. Numerous tea party candidates beat democrats and RINO republicans causing the republicans to win leadership of the House and gain ground in the Senate.

Now, we must hold their feet to the fire. We must also keep an extremely watchful eye on Obama and company. The devastating defeat of the democrats will not sway Obama from cramming as much of his far left agenda down our throats before 2012 as possible.

Since returning home to Florida after touring nationally on Tea Party Express IV, I have been recovering, doing "honey do" projects and making plans for the holidays. Upgrading to a huge flat screen TV would be very nice. Thank you Santa.

Folks, enjoy the holiday season, but keep an eye on Obama and company.

I would like to take a moment to thank a few of our high profile candidates who did not win; Sharron Angle, Joe Miller, Christine O'Donnell and Anna Little. Thanks for heeding the call of the people and taking a stand for conservative principles and values.

And let me get this off of my chest. Some folks on our side are saying, "These tea party candidates should not have run. Vote for the RINO to win the seat."

People who make such statements obviously still do not "get us." We the People/Tea Party patriots are "done" with holding our noses and voting for candidates who don't give a hoot about what we want. Sharron Angle, Joe Miller, Christine O'Donnell and Anna Little are rock stars as far as We the People are concerned. I pray they will run again.

I have heard that Anna Little has already begun her 2012 campaign. I love it. I campaigned for the four tea party candidates I mentioned. They all had huge volunteer support which is a reflection of their connection to the people. However, defeating "the machine" is quite a challenge, but doable.

I was particularly impressed by Anna's Army in New Jersey. In her bid for Congress, Anna Little beat a RINO in the primary spending only $21,000. Her RINO opponent spent $400,000.

When I met Anna a few weeks before the November election, Anna's army of hundreds of volunteers had already knocked on 40,000 doors. They averaged 8,000 doors per week.

Folks, I witnessed real tea party passion for this conservative candidate. Mark my words, Anna Little will be key in helping us restore America. Anna's Army is growing.

Here is a video illustrating the Peoples' passion for Anna Little. http://www.youtube.com/user/starmoss?feature=mhum

Enjoy your holiday season folks. I am feeling the need to let family and friends know how much I love them.

My doctor says more exercise and losing ten pounds will help my Diabetes. So I am back in the gym and lowering my calories. I must stay healthy to continue the fight for our country.

The November election was only round one of our battle for America. Just like a wounded animal, the left, democrats and Obama are more dangerous than ever.

I encourage my fellow tea party patriots to continue doing what you have been doing; everyone following their passion and using their gifts and talents to defeat the insidious enemy within known as the Obama administration. We have won a major victory, but the battle is not over. Come January, we have much work to do.

And for crying out loud, one slice of my buddy's wife's annual amazing homemade pumpkin pie with real whipped cream on top will not kill me. Happy Thanksgiving! 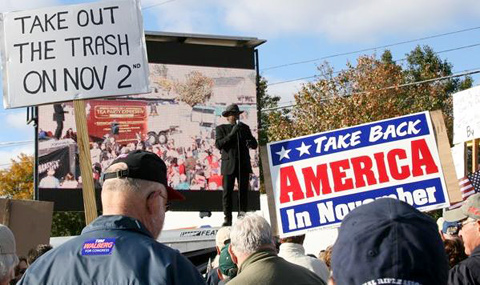