Lloyd Marcus
A case for Cain

June 12, 2011
Upon the election of Obama, Al Sharpton was asked, "Will the election of a black president confirm that America is no longer a racist country?" In a nutshell, Sharpton replied, "No."

What Sharpton really meant was, "I ain't lettin' white America off the hook that easy. Promoting that blacks are eternal victims of a racist America has been an extremely profitable GREAT GIG over the years. I'm not gonna let a little thing like facts which prove otherwise stop me from getting' paid."

Well, despite Sharpton, so-called "civil rights" race exploitation organizations, and the liberal media, America has come a long way baby in regard to "race relations."

As a matter of fact, as a black man myself, we are actually "in vogue." Some would say I should feel good about it, but I do not. I long for an America where politicians do what is best for ALL Americans and not pander to any perceived strong voting bloc. As for hiring practices, I believe the most qualified person should get the job...period. 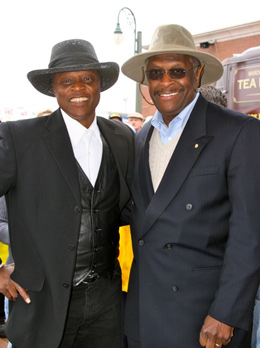 Desperate patriots, wringing their hands in fear, have come to me saying, "Herman Cain MUST be our Republican presidential nominee because only another black guy can defeat Obama."

Wow, who would have ever thought it would come to this: gotta go with the black guy because "black is in"?

I could not agree more with Kebreau. I want the best candidate in the White House regardless of race or gender.

Having said that, I believe Herman Cain would be awesome for America.

As former CEO of Godfather's Pizza, Cain is heralded for his extraordinary work saving the failing company. He is also former president of the National Restaurant Association. Cain is obviously a gifted businessman, well armed with common-sense solutions to bring America's terminally ill economy back from the brink, courtesy of Obama-nomics.

President Obama views America's economy as a tool to implement social justice, reward his friends, punish his enemies, and control our lives. Dear Lord, we have got to vote this despicable man out in 2012.

But the main reason I believe America needs Herman Cain is his character. Wow, why does that sound so corny?

Could cynicism be the after-effect of a U.S. president receiving oral sex by an intern in the Oval Office, a politician using a government driver and vehicle to retrieve bribe money stashed in his freezer during hurricane Katrina, and a politician awarded his own TV show after being exposed as a prostitute's client number 9? Have these behaviors by politicians, to name only a few, dumbed down our expectations?

Remember how the liberal media and the Clinton administration covered for Bill Clinton saying any red-blooded American male would have accepted a "Lewinsky" from a young woman if given the same opportunity?

Think about that, folks: they indicated your pastor, soccer coach, teacher, father, brother, etc. — in essence saying ALL men are characterless dogs.

Don't get me wrong, I am not saying Cain or any other candidate is perfect. My point is unquestionably, the bar for standards of behavior in America has been lowered.

Herman Cain carries an air of class, honor, and respectability of bygone days which strengthens my confidence that Herman Cain can be trusted to do what is best for America.

I know. I know. Cain got stuck on the question regarding "right of return" in the Arab/Israeli conflict during a TV interview. Thus, you question his knowledge of foreign policy.

Well once again, this is where Cain's character is crucial.

Folks, no candidate knows everything about every issue. This is why presidents have "advisors." For crying out loud, Obama thinks we have 57 states. Even more scary, Obama is familiar with "right of return" and still came out on the wrong side of the issue against Israel, our ally.

This is why America needs a character-driven Commander in Chief like Herman Cain, who, once briefed on an issue, will do the right thing.

Also, Cain has no problem or fear about "takin' it to Obama" by challenging his socialist agenda and horrific record, which I believe is extremely vital to defeat Obama in 2012.

Recently, I raved about Sarah Palin. While not formally endorsing anyone, I am simply commenting on candidates who I believe possess the "right stuff" for the job of restoring America.

I like Cain so much, I wrote a jingle about him. Enjoy! http://bit.ly/liblUq