Lloyd Marcus
Conservatism 101 for those not paying attention

November 26, 2011
You and I are politically well informed. But there are many Americans like my family who do not follow politics as closely as we do. Their political views are shaped by liberal media bias hit pieces, spin, and sound bites.

99.9 % of my family are Democrats because Marcus family traditional taught us the Democrats are "for the little guy." Republicans are "rich white racists." Liberal media and the Democratic Party jointly support and promote this silly, simple lie, which still wins the Democrats 95% of the black vote. 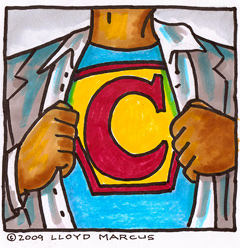 Despite me — the eldest of his five children being a black conservative tea party Republican — my 84-year-old dad's negative view of Republicans remains steadfast. Dad tolerates my baffling political views because he loves me.

However, I would not be surprised if my family scheduled an intervention. A black van pulls up, a hood is thrown over my head, and I'm carted off to an undisclosed location. I am denied food, water, and bathroom privileges and subjected to video of Obama speeches 24/7 until I break.

It occurred to me that my family, like many Americans, are probably clueless regarding the truth of what it means to be a liberal and a conservative. Ironically, the majority of my family live extremely responsible "conservative" lives. They go to work every day, serve their communities, attend church, and raise their kids. And yet, the liberal media has led them to believe the term "conservative" equals evil white racist.

Let us begin with a parable.

Little Johnny says, "Dad I don't want to go to school. The kids are mean and the work is too hard!"

Liberal Dad replies, "I know just how you feel son. School was no picnic for me either. Stay home today."

Conservative Dad replies, "Boy, you had better get your butt out of that bed and get ready for school. I'll talk to the principal and your teachers to work out any problems. An education is vital to your future success and happiness. I'm forcing you to go to school because I love you!"

I am not suggesting Liberal Dad does not love his child. But Liberal Dad's attempt to be his child's friend rather than a responsible parent is a spineless choice all about making himself feel good.

Patently liberal. Most liberal thinking and choices are about making themselves feel good as opposed to truly helping the people they claim to feel great compassion towards.

Conservative Dad's reply was that not of a friend, but a responsible loving parent.

Liberalism is a religion. Despite failing whenever implemented, disciples of Liberalism faithfully believe if they can spend a little more of "other people's money," they can bring forth their godless utopia where man is the ultimate authority. Atheists tend to embrace Liberalism.

Conservatism equals true/real compassion — rooted in common sense and honoring the human spirit. Conservatism celebrates achievement and a desire to be all one can be.

Liberalism is harmful and idiotic, while shrouded in so-called compassion. For example, teachers at an LA school wanted Ebonics to be acceptable speech for black students. They argued that speaking Ebonics was cultural and learning English was too difficult. They ignored the fact that black kids are not too stupid to learn to speak English correctly, and also the fact that an inability to speak English is economically stifling.

And yet, whenever compassionate conservatives suggest learning English be required, they are branded racist by liberals.

You would think a "Liberal" is someone who is easy going, embracing a live-and-let-live attitude. In reality, liberals tend to be HUGE control freaks — arrogantly thinking themselves compassionately and intellectually superior to us common folks. This makes them best qualified to dictate how we should live our lives. Liberalism birthed Political Correctness, which seeks to control what we are permitted to think, say, and do.

Unquestionably, America was founded on Godly principles. Liberals want all reference to God banned from government and the public square, while demanding we display great tolerance for every other religion. Am I saying liberals tend to be anti-Christian? Yes!

Liberals are notorious for setting rules for the rest of us while exempting themselves. They want the government to demand we drive little more than lawnmowers covered with an auto body to "save the planet." Meanwhile, they travel in limos and private jets.

In a nutshell, Liberals believe they know best. They use government to constantly invade our lives with new restrictions and controls. Government control hidden in Obamacare is the epitome of Liberalism.

I hope I have educated my family and others a little to the virtues of Conservatism and why it is best for all people.