January 10, 2012
I have a GREAT idea! How about a TV show titled, "All-American Christian"? Christians have been getting a bum rap in cinema and the mainstream media for quite a while. In a spirit of fairness, compassion and tolerance, a TV show promoting Christianity is simply the right thing to do. After all, the last thing we need are Christian-phobic Americans. 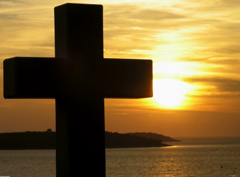 We must educate Americans to realize Christianity is a religion of peace. Christians are not anti-American. The TV show will confirm Christians are not much different than you and me and just as patriotic. Also, Christians would never attempt to force Biblical Law down our throats.

Now, where can I find fair minded, tolerant and compassionate celebrities who will enthusiastically support and speak in defense of the show. I know! Russell Simmons, Bill Maher and Rosie O'Donnell are a good start. These guys are all about fairness, tolerance and compassion. I am extremely confident they will leap at an opportunity to fairly portray Christianity.

Christians are not rioting, seeking to physically punish offenders or lobbying to make it illegal to speak against their religion. Thus, beheading non-believers who reject their religion is not in the Christian recruitment manual. As a matter of fact, the founder of Christianity said, "With loving kindness have I drawn thee."

Rosie O'Donnell, great advocate of women rights that she is, will surely love this. Christian women are not forced to be subservient to men. Under no circumstance does Christianity condone a husband beating, stoning or beheading his wife. A Christian woman is pretty much free to be all-she-can-be from a mom to governor of Alaska to president of the United States. Believe it or not, a Christian woman can even venture outside without having her head covered and face veiled. Thus, it makes perfect sense that the American Feminist Movement would rally around Christianity. Right?

I can not think of a single group of people Christians seek to remove from the planet. While more than 18,167 deadly terrorist attacks, since 9-11, have been carried out in the name of another religion, zero attacks, since 9-11, have happened in the name of Christianity. We know the American left is all about peace; "all we are saying is give peace a chance" and so on. One can only conclude that Christianity's non-violent track record wins their endorsement. Correct?

Unfortunately, Christianity does not have a "lying clause." Another religion has a privilege authorized in its holy book called, "Taqiyya" which means never-feeling-guilty-for-lying. In other words, Taqiyya makes it permissible to lie to protect their religion. Common sense tells us that anything these people say about the intentions and motives of their religion should be taken with a grain of salt. Meanwhile, Christians are stuck with "Thy shall not lie."

It is truly tragic that Bibles, after school Bible studies and prayer at school sporting events are being banned from public schools. Christian graduates are commanded to censor all references to God and especially "Jesus" from their commencement speeches. And yet, nationwide special concessions are being made for another religion; installing foot bathing facilities and etc.

By the way, our government has sponsored the defacing of Christian icons. A photo of a crucifix submerged in a glass of urine was funded by the NEA (National Endowment of the Arts). The award winning photo is titled, "Piss Christ." The Brooklyn Museum of Art, despite considerable controversy, exhibited the Holy Virgin Mary painted with elephant dong.

Christians are legally fighting the court ordered removal of crosses which have been displayed on sites for many years, one out in the middle of nowhere. Nativity scenes are becoming more and more taboo in public schools and government buildings. Our kids no longer go on Christmas break from school. It is now called Winter Fest-a-something or other.

Some paranoid conspiracy theorists say Christianity has infiltrated high levels of our government. Rumor has it that even President Obama is a Christian. However, this rumor is yet to be confirmed. I wish to go on record stating that I am not Christian-phobic. America was unarguably founded on Biblical principles. Therefore, I am completely comfortable with Christians influencing our government.

We can count on Secretary of State Hilary Clinton to aggressively work to make Christian-phobia punishable by law the way she is for another religion.

So yes, the timing is perfect for an "All-American Christian" TV show. I am sure Hilary, Obama and all those compassionate tolerant Hollywood types will enthusiastically join in our effort to get out the truth about Christianity- a virtuous, misunderstood and wonderful religion of peace.

Folks, this is gonna be great! I am soooooo excited. For the debut of the "All-American Christian" TV show, I wonder if we can get Tim Tebow to make a special guest appearance. Wouldn't that be awesome?