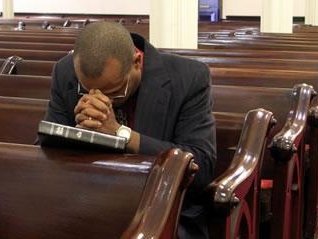 Increasingly, I am hearing the following mantra/narrative from Black Christians. "I'm voting for Obama because he is the lesser of the two evils." This is an extremely weak veiled attempt to justify their racism and loyalty to The Black Code (never side with a white against a fellow black).

From a Christian point of view, how can any Bible believer conclude that Mitt Romney is more evil than Barack Obama?

Here are a few of the numerous things on Obama's anti-Christian agenda. Obama supports same-sex marriage and has vowed to be an advocate for the gay, lesbian, bisexual and transgender communities. Obama supports abortion including infanticide (making it illegal to provide medical aid to a baby that has survived a failed abortion). Despite their strong will to survive, these babies must be left to die.

Massive governmental controls hidden in Obamacare include forcing Christian institutions to fund abortion services against the teachings of their faith. Think about that; the federal government demanding that Christians betray their biblical beliefs. Forty Catholic groups are fighting back by suing the Obama Administration. In typical liberal incremental fashion, our military has gone from a "Don't ask/ Don't tell" policy to being mandated to celebrate Gay Pride Month under Obama.

Indisputable facts are available everywhere exposing Obama to be the most anti-Christian president in U.S. History. http://www.theblaze.com/stories/barton-calls-obama-americas-most-biblically-hostile-u-s-president/ I know some of you Black Christians will continue to stick your heads in the sand, refusing to accept the truth. Woe be unto you. Racism is evil, whether it comes from whites or blacks blindly worshiping Obama because of his skin-color.

So Black Christians, tell me Romney's stated ant-Christian agenda. Grasping at straws, some will say Romney is a Mormon and Mormonism does not jive with Christianity. Well, you may have a point. However, Romney has not attacked Christianity or pledged to force Christians to betray their faith. Obama is boldly and dictatorially implementing his anti-Christian agenda. Regrettably, many of you black so-called followers of Christ realize who Obama really is and what he is doing. And yet, you will vote for him anyway because of your sick addiction to racial politics.

I have also heard Christians say, "OK, I admit that Obama is destroying America, but I cannot vote for a Mormon." Such thinking is illogical. Imagine, your home is on fire and your family is trapped inside. The Hells Angels motorcycle gang arrives at the scene offering to go inside to rescue your loved ones. How absurd would it be to reject their "God-sent" help because you disapprove of the Hells Angels' lifestyle?

Remember this old joke? A guy was trapped on his roof during a flood. He prayed for help. Various volunteers came to his aid in boats. The man rejected them all, waiting for God to save him. The foolish man drowned. In Heaven, the man asked God why he did not answer his prayer. God replied, "I did answer your prayer. You rejected everyone I sent."

America is on fire folks. Romney/Ryan are the most available firefighters. Thus, I believe they are "God-sent."

I asked a black minister friend to further explain this "lesser evil" thing. He said the "lesser evil" in his mind is the economy. While not disputing Obama's anti-Christian agenda, Obama still wins his vote because he believes Romney/Ryan's plan will further the decline of America's economy. In essence, this black minister of the Gospel is saying he values the economy over God's condemnation of homosexuality, over the lives of babies and over freedom of worship.

And by the way, this minister thinking that Obama's economic plan of spending our way to prosperity is superior to Romney/Ryan's plan is idiotic, nonsensical and absurd. I can not believe my friend is that stupid. I believe sighting the economy as his reason for voting for Obama is a weak excuse to mask his racism; pure and simple.

To all you, Obama-is-the-lesser-of-two-evils black Christian voters, you should be ashamed of yourselves. You "ain't" foolin' nobody. You are racists! May God have mercy on your souls.