October 18, 2012
In Grand Blanc, MI, our Rebuild America Defeat Obama tour buses were met by protesters holding printed Obama signs. About half of the dozen or so protesters were black. When I, a black conservative, stepped off of the bus, a black male protester approached me yelling, "You need help! You are Crazy!" A black female protester yelled, "How much are they paying you?"

Proving herself to be a racist brain-dead Obama zombie, an elderly black woman shoved her Obama sign in my face yelling, "Sin! Sin! Sin! You should be ashamed!" This woman calls me a sinner while completely ignoring that her hero, Barack Obama, supports killing babies, most of which are black. She also ignores that Obama supports same-sex marriage and has vowed to be an advocate of the gay, lesbian, bisexual and transgender communities.

Assuming that the black woman who called me a sinner considers herself to be a Christian, she has been deceived into worshiping a false god of skin-color over her commitment to Jesus Christ.

Upon our entire team existing the tour buses, the Obama protesters followed us from the parking lot inside the Grand Mall where we where having our rally. They taunted us and tried to disrupt our inspiring and uplifting event. They failed miserably.

As a matter of fact, the Obama protesters proved to be a blessing. Their presence at our rally provided a golden opportunity for me to direct specific comments in my speech towards them.

I whipped out my driver's license. "Look folks, I have a photo ID!" Then, turning to the protesters, I continued, "This confirms that the Congressional Black Caucus, NAACP, Obama Administration and the mainstream media are wrong! Black people are NOT too stupid to acquire a photo ID!"

The standing room only crowd of patriots erupted with cheers, laughter and applause. One of the Obama minions yelled, "You're a clown!"

Continuing my speech, "Folks, according to the Democrats, I am a very weird sick black man. I do not resent white people. (turning again to face the protesters) I don't believe anyone owes me anything. But worst of all, I LOVE MY COUNTRY!!!"

After our extremely successful enthusiastic rally, the protesters continued their taunting. You would think some in their group would at least ponder the truths/facts they heard from various speakers during our rally. They did not. They continued to call me names, one of which was "a shameful sellout." Apparently, the Obama protesters heard nothing.

What struck me most about the protesters is that they were mindless, TOTALLY driven by emotion and racism. They need our prayers.

We ended the rally with everyone singing God Bless America! http://www.youtube.com/watch?v=Z48enwhlXe8 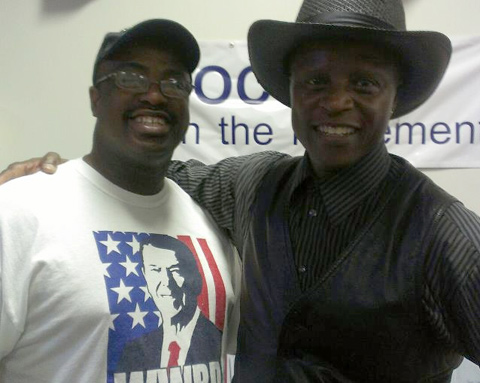