Chip McLean
They never learn: The MSM keeps discrediting themselves 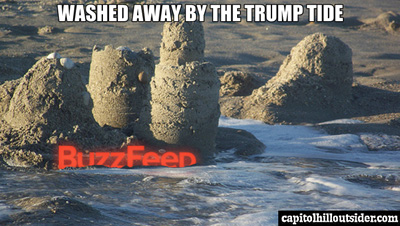 With public opinion indicating that the mainstream press has an even lower approval rating than congress critters, why does the MSM keep shooting themselves in the foot?

The latest self-inflicted left-wing casualty is NBC owned BuzzFeed – which chose to publish the unsubstantiated and badly tainted "dossier" on Donald Trump and his "Russian connections." Their rush to put out what the intelligence community has now referred to as "unvetted information," has led to a worse than embarrassing moment for BuzzFeed (along with CNN, who reported the event without publishing the 35 page dossier).

The wild, unprovable accusations were ginned up by an opposition research group, who hired an ex-MI6 spy who wrote the "report."

The Daily Caller's Scott Greer has an excellent commentary on the MSM's propensity for backfiring anti-Trump plots:


Russia apparently has the next president of the United States under its thumb, thanks to a treasure trove of compromising material the nation has on our future commander in chief.

That was the narrative dominating the discourse on journalist Twitter Tuesday night after an explosive CNN report dropped on how both Preisdent Barack Obama and Donald Trump were briefed by intelligence officials on accusations Russia has compromised the president-elect.

The reactions were predictable as liberal journalists and commentators descended into "Russia has taken over our country!" hysteria for the umpteenth time. The general reaction was best summed up by New York Times columnist Charles Blow, who wondered "How are we going to have an inauguration next week?" in light of the CNN report.

Shortly after CNN published the report, BuzzFeed posted the unverified memos on Russia's alleged compromising material on Russia, which the intelligence officials were referencing in their briefing reportedly given to Obama and Trump. The "dossier" – compiled by a former British intelligence operative hired by anti-Trump Republicans and Democrats – contained accusations that would make the National Enquirer blush, and all of which of were unverifiable.


Rush Limbaugh made the remark Wednesday basically saying that this incident will only serve to shore up support for Donald Trump – as this simply goes to prove the President-elect's point that the media is not reporting objectively, they are simply acting as a hit squad against him. Essentially Rush is saying that this will make future attacks on Trump by the MSM even more futile because of their now totally damaged credibility.

Millions of Americans voted for Donald Trump because they have become disgusted by left-wingers "fundamentally transforming" the nation they loved into a socialist utopia. They were sick of career politicians who pandered to them at election time, but forgot about them afterwards until it was time to vote for them again.

They are angry with the elitist, inside-the-beltway mentality that wanted to maintain the status quo.

Perhaps most of all, they were angry at a press that rather than being the journalistic watchdogs they are supposed to be, have simply become the propaganda arm for those same elites to retain power.

The problem for the MSM – just like the career politicians – is that Joe Six-pack finally woke up – and good 'ol Joe, has said to hell with you.