December 21, 2008
Having just turned five years old, I was a little young (at least back then) to question the "holiday" law-of-the-land. Of course five-year-olds believed in Santa Claus! But it was back in the day when several ages of neighborhood kids used to hang around together, and I was running with some seven- and eight-year-olds who were feeding me some pretty good reasons not to believe in that benign big man.

Most of you are at least vaguely familiar with the various Protestant Reformation (and later secular) traditions that transformed Saint Nicholas into Santa Claus, so it is not necessary to go into those now. What I'm wondering is why many devout Christians including some Catholics, conclude that, while it's absolutely crucial to be truthful to your children, in the case of Santa Claus, it's perfectly acceptable to LIE.

Yes, I used the word lie deliberately, rather than some double-speak like "story-telling" or even "half-truth." For to go along with the Santa myth is not harmless fantasy; it is deliberately deceiving your children about the Good News, specifically the Salvation Story. In my case, it was not the "time factor" (all those houses in one night!) or "small chimney, big body" arguments that dissuaded me. It was because while many "good" poor kids got few, if any presents, many "bad" rich kids received more than their share  completely contrary to the basic "good kid, bad kid" theory of Santa gift distribution. Perhaps few other five-year-olds adopted my line of reasoning, but the fact remained that my devout Catholic parents were the ones who sold me on the Santa Story, and this made the discovery all the more disillusioning. For it was the first (and one of the only times) that my folks had lied to me  and once that absolute trust is lost, every parent knows how hard it is to get it back.

Also, this article is not aimed at those, who, through negligence, convenience or simple lack of faith, are routinely dishonest with their kids. This warning is geared toward good parents like my own, who through societal or peer pressure, gave in to the Santa Claus myth. So if you are in the latter category, but think I was either an over-sensitive lad or am making a holiday molehill into a holy-day mountain, let me conclude with a couple of good reasons for raining on the kids' Kris Kringle parade. 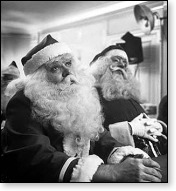 First, in our ever increasing materialistic society, I believe this once sacred cow of Christmas consumerism is actually in danger of being swept aside. Twenty years ago Santa may have been safe; the one dude that could be politically correct and fat. But in our 21st century, high-speed, cell-phoned-off society, I notice more and more adult radio and TV ads (which kids all hear and see) poking fun at the Old, Out-of-Shape One whose place techno-society is rendering irrelevant. But the better reason, if you are a Christian, is simply that the real story is better than the make-believe one.

In telling my kids the true story of St. Nicholas, a skinny bishop who did his best to bring gifts to poor kids so that they too might share in the joy of Christmas, I found it fit in much better with the true meaning of the holiday than the cliche-ridden, contradictory tale of sleighs and reindeer. Plus, St. Nicholas' life is not only a great example of the Christian axiom, "It is more blessed to give than to receive" (Acts 21:35), it is a perfect lead-in to the story of the Incarnation, where the Lord of Lords received the praise of angels and gifts of kings despite being born in a stable.

So withstand the pressure from your peers or (sometimes) even your own parish, and resolve this Christmas to tell your toddlers the real truth, for in the case of Christ, truth is always stronger than fiction. While it is not necessary to preach, as fundamentalists have, that "Santa is one letter removed from Satan" (for it is possible to show your kids that, just as there is some truth in the various Protestant versions of Christianity, there is some good in the Santa Claus tales), it is imperative not to perpetuate the Santa Claus lie. For Satan IS the "father of lies" (John 8:44) and he will gladly add your version to his X-Mas list if you only give him the chance.