"There were tough moments for the Irish on the field and off this season...before the Tulsa [game]...one of the student videographers was killed in an accident at practice." — from the Official Notre Dame Athletic Site's Sun Bowl article 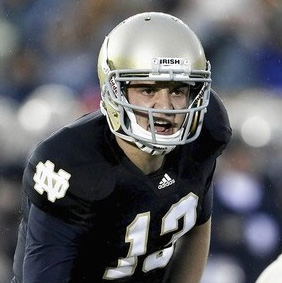 In a rematch of the so-called "Catholics versus Convicts" rivalry of the late '80s and early '90s, Notre Dame, aided by a "heavenly weatherman" (a.k.a. Declan Sullivan) blew by the Hurricanes early before coasting to a 33-17 win in the 77th Sun Bowl. And, although one cannot state definitively the exact moment of Sullivan's arrival into heaven, neither should fans consider the four straight Irish victories since his probable passing from purgatory into paradise merely a coincidence.

Whether you just bought the Declan angle or not, it's hard to believe that someone didn't favor Notre Dame when the Texas weather (a mere 34 degrees at game time) became more similar to South Bend than South Florida. In fact, the Irish raced out to a 27-0 lead before a Miami team without a true head coach (their 2010 coach, Randy Shannon, had recently been fired) had even gotten warm. Sun Bowl MVP Michael "Pretty Boy" Floyd caught six balls for 109 yards and two touchdowns before halftime, and Cierre Wood scored the other Irish TD on a nifty 34-yard run. Meanwhile, many of frail Irish freshman quarterback Tommy Rees' (15-29-201, no INTs) wobbly tosses were anything but pretty, but since Rees is 4-0 as a starter, it will be difficult to take the lad, who looks and throws more like a paper boy than a football player, out. Contrast this with athletic Miami starting QB Jacory Harris; J Ha completed all seven of his passes, but three of those catches were by the Irish.

Although I'm ever the optimist, realistically it's right not to read too much into the latest Irish triumph. If the rousing first half against an unorganized Hurricane squad raises hopes that the 2011 Irish are only a player or two away from BCS contention, then the second half, in which Floyd and Irish star Manti Te'o mostly sat out with minor strains, and Miami QB Stephen Morris (who replaced Harris) threw for 282 yards and two TDs to make this laugher a game again, also rates Notre Dame an injury or two away from another potential blowout to Navy. Perhaps Kelly's first big test will be to see if he can convince future NFL prospect Floyd to wait on the pros and stay at Notre Dame and play here his senior year. Unlike Charlie Weis, who damn near forced his top prospects Jimmy Clausen and Golden Tate to leave Notre Dame early once the Irish dismissed him, Kelly will at least lobby for Floyd to stay loyal to his Alma Mater for his final academic season. But because Kelly's rally cry to alumni that they would "play for Our Lady" rang hollow, Notre Dame has pretty much remained for "Pretty Boy" the same as any big time football school; a stepping stone to the NFL, and Kelly will be hard pressed to keep him.

Continuing with that thought...since Kelly's 2010 pledge in a summer University fundraiser to "play for Our Lady" proved to be nothing more than an underhanded attempt to raise funds from disgusted formerly contributing alumni like myself, who, unlike the University's president (and football coach) remain loyal to Our Lady, can there be any real hope things will change for the Irish in 2011? As far as the fundraising goes, even though the University's summer ploy to ply funds from me ended as futilely as the Irish's autumn attempt to stop the Navy, you'll be "happy" to hear that Jenkins' henchmen have not given up on me — yet. In their latest laughable letter, which begins "Dear Tom: The spirit of Notre Dame thrives on faith and loyalty," I am informed that I, Thomas A. O'Toole, can become a "Charter Member" of the newly formed Notre Dame "1842 Loyalty Society" for a mere $200 donation (coincidentally, the minimal amount an alumnus must contribute to be in the ND football ticket lottery) this year, plus another $200 "make up" contribution for 2009, the year in which I stopped contributing to the University due to the fact Jenkins declared Obama to be God rather than Jesus.

Of course, I could do this the easy way, and, like my friend and fellow alumnus, Mike, wash my hands of Notre Dame and demand, under threat of lawsuit, that the University removes me from all mailing and phone lists until Jenkins apologizes to the Bishop, the Pope, and all of Our Lady's loyal sons and daughters for placing Obama in charge of Notre Dame rather than the Church. But if Our Lady has taught me true loyalty, apparently the University (and its football team) has taught me real perseverance. While I agree with Michael that I can't promise the University my hard-earned, starving-Catholic artist money (although like Mike, I remain open to buying football tickets at face value) until Jenkins recants, I will strongly consider giving again for the short run if the administration guarantees my funds go toward a statue honoring Declan Sullivan in the student section of the stadium. 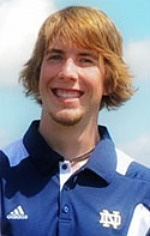 For just as I suspected, it appears that just when Notre Dame has started to win again, that Declan has been forgotten. Note how Notre Dame's approved athletic website (which of course has Jenkins' blessing) now refers to Declan as "one of the team's student videographers" and no longer uses his name. And so on the eve of the first feast day of the first Holy Cross saint, Andre Bessette, I beg of you, Father John Jenkins, if you still call yourself a "C.S.C." to commit Declan Sullivan's name forever to the memory of the Notre Dame fans everywhere by making his presence a permanent part of Fighting Irish football lore. If you honor him with this stadium statue, I guarantee you Declan will continue to intercede for the Irish; for how could he not pray with fans continually seeing his inspiring statue and then seeking his big play intercession? If, on the other hand, you refuse him this honor, and continue to forget his name (and an out-of-sight "Sullivan Scholarship" does not count) not only do you risk forever losing alumni like Mike and me, but your name will always be cursed with the worst of the Irish coaches and priests, as Declan instead joins the crowd in heaven, and goes to root for the Saints. And if that becomes the case, Notre Dame will then be a cause so lost even St. Jude will throw in the towel.