Joan Swirsky
Joan Swirsky interviews Linda Goudsmit on her recently published opus, The Book of Humanitarian Hoaxes: Killing America with Kindness
A look at the 'malevolent con job' leftists are foisting on America 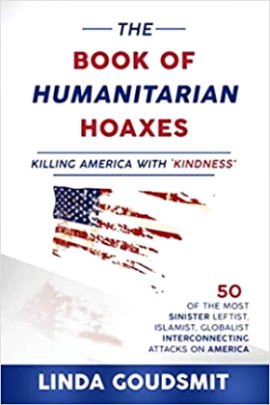 Recently, New York-based journalist Joan Swirsky interviewed author Linda Goudsmit about her book The Book of Humanitarian Hoaxes: Killing America with Kindness,' which outlines with stunning clarity the deceptive 'transformation of America' that has been underway at the hands of leftists for decades. Below is their exchange.

Joan Swirsky: Linda, when did you have the blazing insight that what you were witnessing in the politics of American leftists were not sincere efforts to improve the system, but rather elaborate hoaxes designed to destroy our country?

Linda Goudsmit: From 2017 to 2019, I wrote a number of articles in response to current events. At about the third article, I realized that there was a consistent pattern of leftist political policies that were presented as altruistic, but in reality were deceitful, tactical, political strategies deliberately designed to collapseto destroyAmerica from within.

Joan: Indeed, your book spells out the quite astounding number of 50 Humanitarian Hoaxes! And quite courageously, you identify the culprits you believe are responsible for this malevolent con job on America. I must add here that readers can also access your articles at: lindagoudsmit.com and goudsmit.pundicity.com

Linda: Yes, there are many perpetrators of this stealth attackand malevolence describes its destructiveness. But the Huckster-in-Chief is Barack Hussein Obama who, from his first appearance on the national and international stage, proclaimed his intention to fundamentally transform America." Of course, most Americans had no idea that Obamas goal was to replace our constitutional republic with socialism. We are witnessing the extraordinary success of his seditious plan today.

As I explain in my book, it takes ideology and money to fundamentally transform America. Obamas anti-American, pro-Muslim, Marxist ideology is taught through Common Core in schools across America. The Black Lives Matter and Antifa so-called protestors who are rampaging through our country today, toppling historical statues and proclaiming their goal to destroy our Constitutional Republic, are actually graduates of our own public school system. They are acting with the incitement of Obamas resistance group, Organizing for Action (OFA), as well as with the collusion of the globalist media, the collaboration of the RINOs and corrupt radical leftist Democrats in Congress, and the cooperation of Democrat mayors and governorsall of them financed courtesy of their globalist handlers.

Joan: And you elaborate in your book what their end game is.

Linda: Yes, for these Marxists, the end game of socialism is communism. But for the globalists who finance their mayhem, the end game of socialism is the new world ordera one-world government ruled by the globalist elite themselves, of course! BLM and Antifa are simply useful idiots. Their supporters are low-information individuals who have no clue that the globalists bankrolling this global anarchy and social chaos fully intend to impose a one-world government through the auspices of the United Nations.

Joan: In your book, you also describe how corporate sponsors and businesses support radical groups like BLM and Antifa.

Linda: Yesfollow the money. Its always about following the money. The corporate sponsors of BLM and Antifa (and their Marxist affiliates) know exactly what the plan is. The 279 globalist companies currently supporting BLM, for instance, manufacture their goods with cheap labor in China. President Trump put the hurt on China with his devastating tariffs and it is a financial nightmare for these globalist companies. They want to get rid of Trump and go back to business as usual with a guy like Bidena corrupt Democrat tool of the globalists and communist Chinese.

Joan: The whole notion of a hoax is something that fools both the American and the international public. What ingredients do you believe went into fooling such a massive number of people when it came to electing an inexperienced community organizer to the presidency of the U.S.?

Linda: After WWII, it was obvious to the entire world that America could not be defeated militarily. But our enemies did not go quietly into the night. They regrouped and revised their tactical attack plan as an insidious Culture War designed to collapse America from within. They targeted the three supporting pillars of American societyFamily, Faith, and Flag. They pitted American capitalism vs. socialism, American individualism vs. socialist collectivism, American freedom vs. cradle-to-grave dependency on government. And then they groomed the perfect candidate, Barack Obama, to do their bidding.

Joan: Youve written in depth about the two main weapons in the Culture War.

Linda: Yes. They are: (1) psychological regression and (2) disinformation. Radical leftist Democrats routinely engage in political correctness, moral relativism, and historical revisionism, all basic operating principles of the disinformation campaign. Children do not question what they are toldand neither do psychologically regressed, propagandized leftist liberals, who happen to be chronological, but not emotional, adults. They really are Regressives, not Progressives. You can see this every day when perfectly normal-looking people embody the Humanitarian Hoax behaviors described in my book. They are emotional children disguised as adults.

Joan: Which of the 50 humanitarian hoaxes youve written about is most relevant in todays society?

Linda: The humanitarian hoax of eternal childhood. This hoax explains in explicit detail the crippling effect of pressuring a society toward regression and dependence, rather than emotional maturity and independence. Again, we see this today in the young people, who have been dumbed down in Americas public schools, willingly taking money to protest a system they are ignorant of. Watch them being interviewedits a national embarrassment!

Man-made Climate Change is presented as the most serious challenge facing humanity. The leftist narrative claims all efforts must be directed at saving the planet from global warming or we will all perish in 12 years. In reality, climate-change hysteria is the United Nations' political scheme to transfer the wealth of productive industrialized nations (especially the U.S.) to non-industrialized, non-productive nations. It is globalized socialism.

Gun Control is presented as an effort to reduce gun violence in society. In reality, gun control is the effort to eliminate the Second Amendment and disarm the public, something our Founding Fathers were determined to avoid.

Community Organizing is presented as the altruistic effort to end poverty. In reality, community organizing is the Cloward-Piven strategy to overload the welfare system and collapse the U.S. economy.

The Muslim Brotherhood presents itself as a civil rights organization advocating peace and tolerance. In reality, the Brotherhoods mission is to subjugate host populations in North America and replace host religions and cultures with Islam and Sharia law.

Planned Parenthood presents itself as the ultimate healthcare provider to an underserved population and a provider of sex-education to schools. In reality, Planned Parenthood is an active participant in the Culture War on America, attempting to promote gender confusion, promiscuous sex, and unrestricted abortion-on-demand.

Joan: The readers youve inspired over the past several years want to know whats next.

Linda: Of course I will continue to write political analysis for adults. My focus, however, is on America's children. It is essential that American children are taught critical-thinking skills again. My personal contribution to that effort is my childrens picture-book series, Mimis Strategies. Nationally, the Department of Education must be completely overhauled in both form and content. If one more generation of American children is indoctrinated with anti-American propaganda touting the wonders of collectivism, when these mal-informed kids turn 18 and vote for socialism we will lose the country a revolution without bullets!

Joan: In three months, we will vote in perhaps the most consequential presidential election in American history. In terms of todays tumultuous politicsa president dealing with an unprecedented pandemic and severely injured economy, his rival clearly dealing with clinical cognitive impairment, a radical leftist media not even pretending to be objective, and a push for mail-in voting which is notorious for massive voter fraudwhat is your gut instinct about the upcoming presidential election on November 3, 2020?

Linda: I remain optimistic, Joan. I wrote The Book of Humanitarian Hoaxes in advance of the 2020 presidential election to make sure voters know WHAT they are voting for, not just WHO they are voting for. This is no small thing. This election is between Trumps Americanism and Bidens globalism.

The radical leftist Democrat Party has an anti-American socialist agenda that seeks to weaken America. They have ignored WHAT President Trump has accomplished to strengthen America and, instead, engaged in four years of character assassination and false accusations to destroy Trump and his America-first agenda.

President Donald Trump is the existential enemy of globalism. His proud and unapologetic America-first policies are the intractable obstacle to Obamas insidious plan to transform America into socialismthe stepping stone to globalism's one-world government. The Democrats have shown they will lie, cheat, and try to steal the election to defeat Trump and bury the serious and indictable crimes the Obama regime has committed.

However, I just dont think Americans are buying what the Democrats are selling. I believe Trump will be reelected in a landslide.