Maybe I don’t frequent the right journals, Internet sites, TV shows, or radio stations, because all I’ve seen and read and heard since the 1960s is that the Arabs who call themselves “Palestinians”—you know, those perpetual “victims” who have received literally billions—maybe trillions—in “aid” from America, have become famous for five or six things:

What I’ve never seen or read or heard is that the Arabs who call themselves “Palestinians” have done one single solitary thing to benefit mankind. Their singular obsession has been to annihilate the Big Satan—America—and the Little Satan, Israel.

Christianity and Islam are the two largest religions in the world, with 2.4 billion and 1.9 billion adherents respectively—literally half the people on our earth of about 7.8 billion people.

In stark contrast, Judaism is comprised of 15 million people, about eight million in Israel, about six million in the United States, and about one million scattered throughout the world.

To see the most vilified state in the entire world, look here at the infinitesimal red strip, surrounded by 300 million Arabs, once enemies until President Donald J. Trump succeeded for the first time in history in establishing the Abraham Accords, which now find Oman, Qatar, Bahrain, the United Arab Emirates, Morocco, et al., all at peace and doing business with Israel: 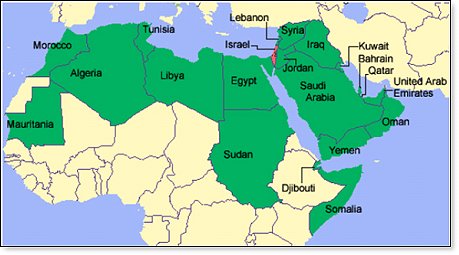 Israel is home to more than a million and a half Arabs, a number of whom have been elected to the Knesset, Israel’s law-making legislature, and now an Arab Party has been elected to Israeli leadership. Nevertheless, those scary Jews are such a menace that here is how Israel’s surrounding states have practiced ethnic cleansing for decades: 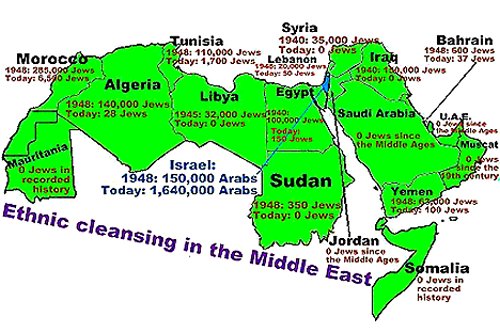 But nothing compares to the long-and-besieged history of the Jews.

First, they were hunted down, marginalized, attacked, and ultimately murdered by the immensely powerful Assyrian, Babylonian, Greek, and Roman empires, which significantly no longer exist––unlike the Jews who are still flourishing. Then:

Clearly, neither time nor education have dented the scourge of Jew hatred. The human species seems to have a need to hate, and the Jews are always the perfect targets for bullies who prey upon small targets, as well as the green-eyed fanatics who think that Jews are smarter and therefore more successful than they are and who cannot help caving to their pathological jealousy.

EMOTION IS STRONGER THAN INTELLECT

Most people thought anti-Semitism was relegated to the trash bin of history after Hitler and his willing executioners from Germany, Poland, Austria, France, Belgium, and Switzerland—with savage premeditation—gassed to death six million Jews in the 1930s and 40s.

But the sad truth is that the world’s hatred of God’s “Chosen People” simply went underground after the Holocaust, while racist parents continued to imbue their children with “the oldest hatred” and, sure enough, it has burst forth in all its hysterical ugliness in––of all places–– the Democrat Congress of 2021. 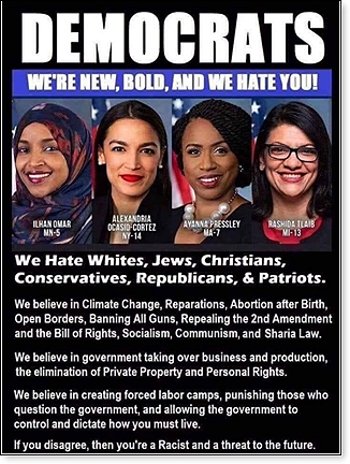 Yet despite the actual pandemic of anti-Semitism, the Jews of the world have stayed laser-focused on their mission to improve the world, which goes back to the Bible up until this very day.

IF THE SHOE FITS….

If Jew haters weren’t such raving hypocrites, if they had a shred of integrity, of character, of true fidelity to their beliefs, they would never avail themselves of the following Jewish innovations:

Israel21c, listing Israel's top 45 greatest inventions of all time, including:

Other incredible Israeli inventions include:

And looky here at the good fortune of one of the premier anti-Semites in American history, President Jimmy Carter, who was lucky enough to have his brain cancer cured by an Israeli drug.

And don’t miss: No Camels.

And let’s not forget IsraAID, a humanitarian-aid organization founded in 2001, which has rushed to emergencies––hurricanes, tsunamis, earthquakes, mudslides, building collapses, etc.––in more than 50 countries and is in Haiti right now! 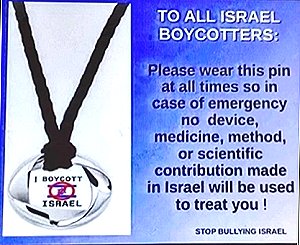 And not to omit this very short list of Jewish trailblazers that pharmacist Meyer M. Treinkman compiled:

In 1995, Dear Abby re-ran a column in which the late comedian Sam Levenson said that “anti-Semitism could be hazardous to your health.” Levenson challenged Jew haters to boycott all the medicines and treatments Jews had discovered.