February 5, 2009
During the campaign, some of us were concerned that Barack Obama, with his socialist background, would govern accordingly.

Many conservatives therefore believe you can disregard as window dressing the appointment of some Republicans to his cabinet. Former Congressman Ray LaHood at DOT was dubbed by the Wall Street Journal as "Obama's Secretary of Earmarks"; taking on Judd Gregg at Commerce makes it even harder for the GOP to retain his (already endangered) Senate seat from New Hampshire in 2010; and retaining Robert M. Gates at the Pentagon provides nice cover for the president's effort to figure out how he can shut down Gitmo without the political blowback from a terrorist attack by the animals currently confined there.

Other appointees more closely reflect what the president's critics believe to be the real Obama (by his actions, forget his soothing rhetoric).

The rhetorical Obama said repeatedly during the campaign that students should have military service opportunities on campus. This goes to the issue of allowing military recruiters to present the students with those opportunities.

The safely-elected Obama  once attaining the reins of power  nominated Harvard Law School Dean Elena Kagan to be Solicitor General. Forget that Ms. Kagan has never argued a case before the Supreme Court, even though the Solicitor General is responsible for representing the government on high court cases, deciding which cases the government deems worthy of government involvement, and which side of the argument the government should take. That is real power. It is anything but a ceremonial position.

As Flagg F. Youngblood  an Army vet and students rights advocate at Young America's Foundation (YAF)  tells us, Kagan "believes the military should be barred from campus." His evidence? Kagan fought a case all the way to the Supreme Court in an effort to deny students the opportunity to serve our country in uniform.

This is sixties counter-culture stuff  the old "make love, not war" mantra with its Holy Grail campaign to keep military recruiters out of students' lives. Nobody is talking about putting a gun to the college kids' heads and saying, "You shall serve in the military whether you like it or not." The draft was abolished during the Vietnam War, but for the likes of Dean Kagan, that's not good enough. We should somehow "protect" students from military recruiters. Never mind that even a sixties-style hippie's life and annual bath lifestyle could very well be saved because there is a military out there ready to deal  when necessary  with evil people who threaten our existence.

Too much even for Clinton

Kagan was a domestic policy advisor in the Clinton administration. But even President Clinton  for all his "loathing" of the military and his draft dodging  signed into law the measure that Kagan has tried to have wiped off the books. The Solomon Amendment  so named after its author, the late great patriot and Marine veteran Rep. Gerald Solomon (R-N.Y.)  gives America's universities a choice: either allow military recruiters the same access to students as that accorded other recruiters, or forgo certain federal funds. 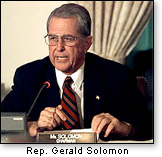 Despite the amicus brief signed by Kagan and 53 other law school faculty members, the United States Supreme court unanimously upheld the Solomon amendment. Had Elena Kagan been Solicitor General at that time, she could have decided against taking the case to the court at all. Thus, the ruling of a lower court  which went against the measure  would have nullified the Solomon Amendment without any review by the highest court in the land.

Even the court liberals

We cannot emphasize strongly enough the significance of the fact that even the liberals on the court  including Ruth Bader Ginsburg and John Paul Stevens, for example  rejected the arguments of Kagan's group  the Forum for Academic and Institutional Rights (FAIR).

The Kaganites claimed that because open and avowed homosexuals are not allowed to serve in the military, colleges and universities that allow military recruiters on the campus are aiding and abetting "discrimination." The court  every sitting justice  rejected the implied claim that the military is no different from any other employer. The military is trained to kill people and break things when necessary to fulfill the constitutional obligation "to provide for the common Defence," "raise and support Armies," and "provide and maintain a Navy." That requires a level of discipline not normally found in a civilian occupation.

The Army is not a social engineering playpen. Even Ruth Bader Ginsburg  an ACLU alumnus  "gets it." Elena Kagan apparently does not.

It is striking that many university classrooms have become indoctrination centers where the socialist worldview is jammed down the throats of students who dare not sass back the professor, lest he flunk them. But let a military recruiter visit the hallowed halls of ivy to interest a student in service to the U.S., and the same preachers of "tolerance" go into a rage that is  well, intolerant.

Youngblood of YAF lists what he calls the "Shameful Six" major universities that have relegated military recruiters to what he calls "second-class back-of-the-bus status." They are Columbia, the University of Chicago, Stanford, Caltech, Harvard, and Youngblood's own alma mater  Yale.

The hearings should tell the story

The Senate Judiciary Committee (as of this writing) has scheduled a hearing on the Kagan nomination next Tuesday. Senators on that panel should question the nominee closely as to whether she agrees with her president, who has rejected the effort to deny the military the right to recruit on campus  a right  let it be repeated  that is accorded to civilian employers.

A path to bigger things?

But the stakes here are even higher. Elena Kagan  as is the case with anyone who would occupy the Solicitor General's office  is considered on a short list for the next Supreme Court appointment. Her views on the Solomon amendment put her way, way beyond the mainstream and at odds with both of the two most recent Democrat presidents, including the one who nominated her. If she fails to clear the air on this issue, her nomination should be rejected by the Senate  or better yet, withdrawn by President Obama. That could indicate whether he meant what he said during the campaign about military recruiting on campus.